“Resistance is a numbers game. If you have a lot of weeds and a lot of herbicide applications, the odds go up that you will select for herbicide resistance,” says Bob Blackshaw, Agriculture and Agri-Food Canada (AAFC) research scientist at Lethbridge, Alberta.

Genetic diversity of a weed population is also a factor, as is high seed production. Kochia can produce up to 15,000 seeds per plant, making it a perfect candidate for herbicide resistance.

The resistant kochia was discovered on chemfallow fields that had a long history of glyphosate-only use as a pre-seed burndown. This practice has become widespread because glyphosate applications are quite cheap, and it costs less to increase the glyphosate rate than to include a tank-mix partner for better weed control. In addition, in no-till cropping systems, glyphosate is applied three to four times during the growing season to control weeds in the chemfallow year. These repeated chemfallow treatments exert very strong selection pressure for glyphosate resistance.

Over the spring and summer of 2012, eight more populations brought to AAFC Lethbridge were identified with glyphosate resistance, and 10 out of 12 populations tested by Hugh Beckie at AAFC Saskatoon were confirmed resistant.
“This tells me resistant populations are out there and reasonably widespread. It has probably been developing over the last three to five years,” says Blackshaw.

To get a better idea how widespread the glyphosate-resistant kochia is, 300 sites in Alberta south of Highway 1 were sampled during the fall of 2012. They are being screened over the winter to test for glyphosate resistance.

Integrated approach required
At the University of Alberta, weed scientist Dr. Linda Hall says several approaches will be needed to keep glyphosate-resistant kochia under control. She says prevention will be difficult for individual farmers, because kochia is a tumbleweed that can blow in from neighbouring fields, ditches, wasteland and industrial sites.

“There is a need for a co-ordinated approach,” says Hall.

Kochia’s growth habits, though, provide opportunities for control. Kochia emerges very early in the spring, giving farmers a wide window to control it with a pre-seed burndown.  It also has a short seedbank lifespan. Within one year, 85 to 90 percent of the seed germinates, so focused weed control could help to drive down the seedbank.

Kochia is also late maturing. This growth trait may provide opportunities for post-harvest control as well.

Both Hall and Blackshaw have been screening herbicides for Group 2/9 resistant kochia.  Blackshaw has one year of data in 2012 from one site on Group 2/9 resistant kochia.  While he needs more years before he can make recommendations, he saw some general trends in 2012. The trials were conducted without crop competition. Generally, 2,4-D, and bromoxynil did not provide adequate control, nor did Buctril M.

Hall’s work covered 2011 and 2012 and was on kochia that was not glyphosate-resistant.  She has been working on pre-seed, and post-harvest trials. In the pre-seed trials, kochia was sprayed, and fresh weight kochia was measured to assess weed control four weeks after spraying with crop competition. A lower fresh weight indicated better weed control.
Attain, Heat, CleanStart, Buctril M and Infinity worked well. Dicamba control of kochia was variable, but Hall cautions that in other trials, dicamba has worked well.

Post-harvest applications targeted kochia after a wheat harvest. After spraying, seeds were collected from the surviving kochia, and seed count, seed viability and seed vigour will be assessed. The results are yet to be tabulated.

“We’re hoping that post-harvest applications will give us another way to try to keep the weed population down,” explains Hall.

Several new Group 4 products that provide good kochia control have been registered since Sapsford’s research, and these products usually include dicamba or fluroxypyr as active ingredients. These include Pulsar, Altitude FX, Everest GBX, Stellar and Tandem.

Authority herbicide is a good choice in chickpea, field pea, flax and sunflower. Liberty will control kochia in Liberty Link InVigor canola. Roundup will control Group 2-resistant kochia in Roundup Ready canola – but not in glyphosate-resistant biotypes of kochia.

“Growers and agronomists have to think about how glyphosate is used in the future. It is one of the most valuable herbicides we have,” he says. “It is used pre-seed, in-crop in Roundup Ready canola, post-harvest and in chemfallow. We can’t keep using it three times per year on every field or we’ll lose the technology.” 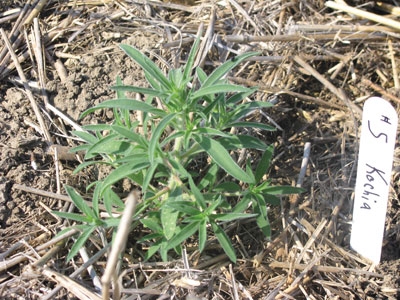 Distinct and Heat chemfallow herbicides will control Group 2- and Group 9-resistant kochia Glyphosate-resistant kochia was first confirmed on three southern Alberta fields in 2011 in the Warner and Milk River districts.