At least three manufacturers are taking direct aim at seed-by-seed planting systems for thousands of farms where canola has become the most important crop. With the seed investment for high-value canola more than $10 a pound, a system that can shave the seeding rate can soon pay for itself.

First on the scene, and native to Canada, is the SeedMaster metering device from Saskatchewan. It has been followed by two vacuum disc systems, the Precision Planting disc from Illinois and the Monosem system from Kansas.

UltraPro delivers a matching number of seeds into each row. Quarter-inch rollers, one per row, drop seed into the air tubes at about 25 seeds per second. They achieve in-row plant spacing at about one to four inches apart.

Ultra Pro is smoother than the standard seed roller, says Rochelle Beaujot, sales manager. Fewer seeds are planted, the seeds are distributed more evenly and the canola crop emerges more evenly. “The Ultra Pro rollers more than pay for themselves in the first year, and most of the time they pay for the SeedMaster tank as well,” she says.

SeedMaster’s precision system was new on the market in late 2011 when Killarney, Manitoba, grower Vern Groening was shopping for something to replace his Case Concord. The family seeds about 3,100 acres of canola and wheat each year.

“We were attracted to the UltraPro because it has individual openers and each opener has a separate packing wheel,” says Groening. “It has better seed depth control and much more precise seeding. It spaces the seeds more accurately than traditional air seeders.”

The Groening farm is in pothole country; fields are very hilly. “It didn’t seem to matter if it was hard or soft ground, sharp knolls or hollows. It seeded at pretty much the same ¾-inch depth, all the time,” he adds.

Groening’s seeding rate with the previous system had been about 4.5 lb/ac for canola. He cautiously reduced the rate to four pounds or a bit less and watched. The emerging canola looked different, he recalls. “It wasn’t coming up in clumps and gaps. It was pretty much singulation of the plants.”

SeedMaster’s dual opener system ended up disturbing about three inches total on the 12-inch spacing. The seed rows seemed well packed. Groening was pleased to see that very little seed escaped the packing wheels, especially because they were moving at six miles per hour while seeding the canola.

Using their 50-foot system, and enjoying ideal seeding conditions, Groening and sons put in the crop, including wheat, in less than a month. “Crop emergence was probably more even than we’ve seen before,” he says. “That was something we took note of. As the season progressed I think the crop did stay pretty even, too.”

Precision Planting eSet
At about the same time the first UltraPro meters were being used in Saskatchewan in 2011, three farmers in the Portage la Prairie slashed their canola seeding rates by using John Deere row crop planters equipped with modified vacuum meters from Precision Planting.

Each Precision Planting disc, called an eSet, is ringed by a set of air holes close to the edge. The front face of each hole has a canola-size indentation, ready to hold one seed. Vacuum pressure pulls seeds against the holes. As a disc turns, seeds are released one at a time for planting into the air tubes.

Precision Planting introduced the eSet vacuum meter for John Deere corn planters in 2005 as a replacement for standard vacuum discs. It “hit the map” for growers when it developed a design for a seeding singulator and higher vacuum.

The singulator is a spring-loaded device that floats against the eSet vacuum disk. It has lobes that gently bump and nudge seeds so that multiples are knocked off and only one seed is left on each cell in the disk.

Prince believes vacuum-assisted planting with discs will enable canola growers to achieve 1.8-inch in-row seed spacing. With 15-inch rows, that’s equivalent to 260,000 seeds/ac. Depending on seed weight, that rate works out to between 2.8 and 1.7 pounds per acre, he says.

He traces the idea back to 2010, when his father, Dave Prince, imported Precision Planting discs for planting corn, soybeans and sunflowers directly from the Tremont, Illinois manufacturer. Frank visited the factory and, at age 21, accepted an offer from the manufacturer to become its Prairie distributor.

Back home, on June 15, they still had 100 acres to plant and decided to try planting canola using the system. “We used the small sugar beet disc, which barely worked with the largest canola seed we could get our hands on. After that, I told Precision what to do to make the discs work better, and they took my advice,” says Prince.

The eSet discs revised for canola, with smaller holes, arrived in 2011. Third-generation canola discs are planned for 2013.

Germination on the row-crop canola has been running at 90 to 95 percent, says Prince. Seed placement is precise and packed. He estimates seeding depth variation is within a one-eighth-inch range. He also says farmers are saving $20/ac on seed, getting more uniform crops and improving yield by around 3 bu/ac.

Monosem planters
Monosem, the “original precision vacuum planter,” has been used in Lethbridge-area row crops – including hybrid canola – for about 30 years. On the eastern Prairies, Botterill Sales at Newton, Manitoba, became the first distributor in early 2012.

Monosem vacuum discs can are available for most crops, says distributor Todd Botterill. Canola discs have 120 holes and turn at a relatively slow rate. Seeding rates are 2.5 to 3 pounds per acre. Even lower rates are possible, but may not be practical.

As true row-crop planters, Monosem units drop the seed about 18 inches directly into the bottom of the V-shaped trench prepared by double-disc openers. The row is closed by a pair of packing wheels.

Seeding depth is greatly improved through the use of depth control wheels that run adjacent to the discs and in line with the seed tubes. “There’s very little depth variation with Monosem’s ‘Monoshox’ down pressure system,” notes Botterill. “We have virtually zero contour depth.”

Monosem planters are customized at the Kansas factory for each order. For instance, there are several frames, row spacing options, choices for suspension and between tires and tracks.

Research will be underway in 2013 to target farming needs in the Prairie canola market. Twin-row technology will be tested on a four-row planter in Saskatchewan. This will enable mid-row banding with only four-inch separation between seed and fertilizer.

In another research project, Botterill will be connecting air carts to two 40-foot Monosem planters. One will double-shoot, and one will triple-shoot. “It’s very easy to make liquid fertilizer work with our systems, but this has never been done before with granular fertilizers on this scale,” he says.

The trial arrangements of planter-and-cart will enable a one-pass application – precision-placed canola seed with the planter and mid-row banded fertilizer with the cart. A single fill of the 32 openers on a 40-foot planter will carry 64 bushels of seed and, at 2.5 lb/ac, has enough capacity to put in roughly 1100 acres of canola, says Botterill.

While Monosem will be the most costly of the three systems for precision-planting canola with lower seeding rates, the system price depends on the configuration, says Botterill. The counter-argument, he offers, is that the Monosem is more accurate and has a lower maintenance cost.

“We won’t compete with hoe drills for cereals, but now some guys are buying precision hoe drills strictly for high-value seed like canola, corn and soybeans, and still using them for cereals rather than running two units. I think we’ll see a lot of this in a few years, where a farm has a planter, or a hoe drill and a planter. 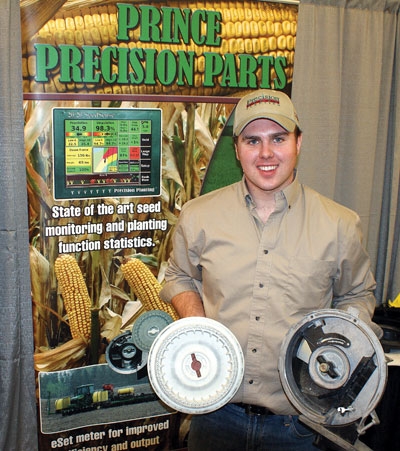 Frank Prince At least three manufacturers are taking direct aim at seed-by-seed planting systems for thousands of farms where canola has become the most important crop.