When glyphosate-resistant (GR) kochia was first identified in the County of Warner in southern Alberta in 2012, weed scientists figured it could be the tip of the iceberg. In the fall of 2012, researchers embarked on a survey of southern Alberta fields to identify the scope of the problem. Led by Linda Hall, a professor of weed science and environmental biosafety of transgenic crops at the University of Alberta, the research group also included Hugh Beckie, Bob Blackshaw and Scott Shirriff with Agriculture and Agri-Food Canada (AAFC), Ryan Low with the University of Alberta, and Nicole Kimmel and Chris Neeser with Alberta Agriculture and Rural Development (AARD).

“Glyphosate is a very important herbicide for growers, so we wanted to see how widespread glyphosate-resistant kochia is to get a better understanding of how it might be managed,” says Hall.

The discovery of GR kochia in discontinuous fields didn’t come as a surprise. It was first reported in Kansas in 2007, South Dakota in 2009 and Nebraska in 2011. In 2010, Beckie, a weed scientist with AAFC, developed a model to predict which weeds are the most likely to become glyphosate-resistant. In the Grassland region, the top three weeds were kochia, wild oat and green foxtail.

To determine the distribution and amount of GR kochia, a randomized stratified survey of more than 300 locations in southern Alberta was conducted in southern in September and October 2012. Mature plants were collected, and seed was separated and screened by spraying with glyphosate at 900 kg per ha under greenhouse conditions. Populations were collected from field borders, ditches and industrial areas.

Hall says GR kochia was identified in four per cent of the fields at 13 of 309 sites (Fig. 1, pg 48). Not surprising, seven sites within the County of Warner were identified with GR kochia. Beckie had previously confirmed GR kochia at 10 other sites in the County in a fall 2011 survey. Five more sites were identified in Vulcan County to the north, and one site to the east in the Municipal District of Taber.

Two of the locations where GR kochia was found were non-agricultural areas (ditch and railway rights-of-way) adjacent to agricultural areas, highlighting the need for municipalities and industry to be aware of the problem and to manage their herbicide control programs with herbicide resistance in mind.


Beckie also confirmed the presence of GR kochia in west central and southwestern Saskatchewan from samples submitted by growers (Fig. 2, pg 48) in 2012. Ten samples were confirmed to be glyphosate resistant.

Hall says the frequency of glyphosate resistance in the confirmed populations ranged from very low – three per cent – to 98 per cent. While the reasons weren’t identified for the differences, given kochia’s prolific seed production, the low levels would be expected to increase if glyphosate alone was used for control.

Use multiple modes of action for control
Where GR kochia has been identified, most often it is in areas where chemfallow is practised. Because glyphosate has become very affordable and is very effective, growers have often applied it without additional tank-mix herbicides. This selection pressure has resulted in the development of GR kochia. In addition, the GR kochia populations were also resistant to Group 2 ALS-inhibiting herbicides.

The good news, though, is that none of the GR kochia populations were resistant to dicamba, a Group 4 herbicide. However, dicamba-resistant kochia has been found in the midwestern U.S., so growers will need to ensure they continue to rotate the tank-mix partners with glyphosate in chemfallow, and pre- and post-harvest.

“What concerns me isn’t as much in chemfallow, where there are options for weed control. Growers do not want to lose the ability to use glyphosate in Roundup Ready canola,” says Hall. “In crops other than canola, growers need to focus on stopping the spread of GR kochia and be aware that it has a large capacity for seed dispersal.”

Hall says controlling kochia in chemfallow, pre-seed and post-harvest applications is a big deal, and that growers should plan their crop and herbicide rotations to target GR kochia. Whether a grower has GR kochia, or just the “normal” Group 2 resistant biotype, they should utilize tank-mixes wherever possible to control kochia in and out of crop.

The research team hopes to extend the survey to southern Saskatchewan and Manitoba in 2013. It is also working on evaluating herbicides for post-harvest applications to provide recommendations on another window for controlling kochia. In another twist, Hall, Beckie and Blackshaw will be chasing after kochia by embedding plants with GPS tags to see how far the tumbling weed can travel.

“Because of wind dispersal, GR kochia presents a large threat for growers across the southern Prairies,” says Hall. “Glyphosate is too valuable to lose.” 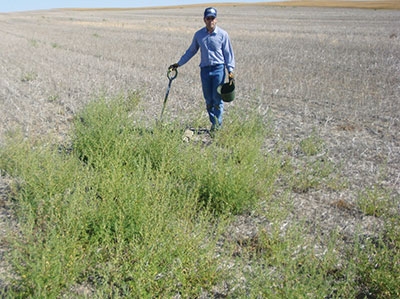