Glyphosate-resistant kochia is spreading across Western Canada, and researchers warn that growers should be diligent when planning crop and herbicide rotations to manage for glyphosate resistance.

Kochia (Kochia scoparia) became the first GR weed confirmed in Western Canada in 2011 in Alberta. To determine if and where the weed is spreading, researchers from Agriculture and Agri-Food Canada (AAFC) conducted post-harvest field surveys in 2013 across 342 sites (one population per site) in southern and central regions of Saskatchewan and 283 sites in Manitoba to determine the distribution and abundance of GR kochia. Populations were also sampled in field border areas and other areas such as roadsides and ditches, railway rights-of-way and oil well sites. Mature plants were collected, viable seeds threshed and seedlings tested for resistance. The seedlings were screened for resistance by spraying with a discriminating glyphosate dose of 900 g ae/ha (2X label rate) under greenhouse conditions.

“The Saskatchewan survey results showed the majority of GR kochia populations originated in chemical-fallow fields [10 of 17], although some populations were found in cropped fields [wheat, lentil, GR canola] and non-cropped areas [oil well site, roadside ditch],” he adds. “However, in Manitoba, the two populations occurred in fields cropped to GR corn and soybean. During these surveys, it was common to see other kochia populations suspected to be GR in fields adjacent to the survey-targeted field, suggesting seed spread via tumbleweed movement or by farm equipment.”

“We also confirmed the first GR kochia in lentil and GR canola in one municipality near Moose Jaw, which is spatially isolated from the cluster of municipalities in west-central Saskatchewan,” Beckie notes. “This field was cropped to lentil with glyphosate applied preseeding and preharvest, which is a common practice in the areas. However, we can’t rule out that the GR kochia may have migrated from adjacent land.”

The impact of this GR weed biotype on both economics and agronomics is compounded because of consistent multiple resistance to Group 2 (ALS inhibitor) herbicides. Beckie says most Prairie kochia populations are ALS inhibitor resistant. “Our finding of the first GR kochia in lentil is concerning, as currently there are no in-crop herbicides available to control GR plus ALS inhibitor-resistant kochia in lentil. There are also no in-crop herbicide options to control this multiple-resistant biotype in canola, other than growing a glufosinate-resistant canola cultivar.” Similar to the Saskatchewan GR kochia populations, both Manitoba populations were ALS inhibitor-resistant.

Although kochia was the first of several species predicted to be at risk for glyphosate resistance in Western Canada, other abundant species selected during preseeding or in-crop/fallow applications are also at risk, including wild oat, green foxtail, cleavers and wild buckwheat. Like kochia, these weeds have already been selected for resistance to herbicides with different sites of action used in-crop. Beckie estimates the cost of herbicide-resistant weeds at $1.1 billion to $1.5 billion per year on the Prairies. The cost is from a combination of related factors, including added herbicide cost due to increased tank-mixing required, added overall weed management (cost of tillage or crop rotation, for example) and lost yield due to increased weed competition. 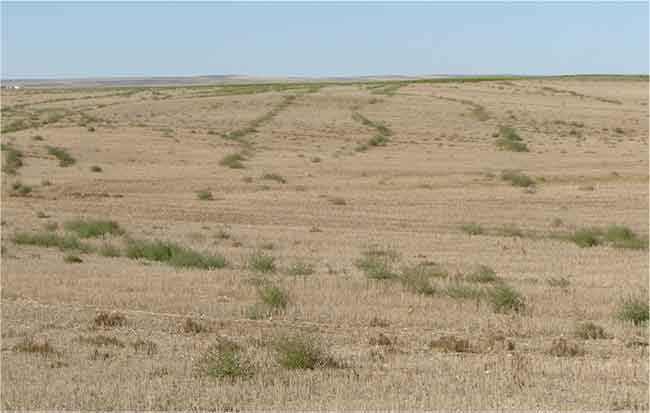 GR kochia in southern Alberta in 2011. Glyphosate-resistant kochia is spreading across Western Canada
Print this page