Could we strengthen the defensive benefits of canola’s waxy outer layer? 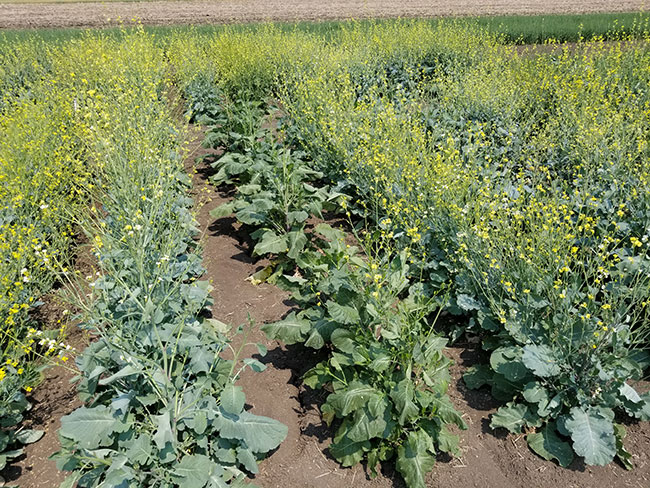 Mark Smith’s project included comparisons of the wax on canola and some of its Brassica relatives, like the Brassica carinata varieties shown here. Photo courtesy of Mark Smith, AAFC-Saskatoon.

A recently completed project has taken some key steps in an intriguing approach towards fortifying canola’s ability to withstand stress. The idea is to enhance canola’s natural defences by modifying its waxy outer layer through crop breeding.

“Land plants have a waxy covering. The main function of this waxy layer is to provide a water barrier to stop the plant from losing water. But it is also the first line of defence for a plant against attacks by insects or pathogens. For instance, when a fungal spore lands on a leaf, the first contact it has with the plant is the wax layer,” explains Mark Smith, the research scientist with Agriculture and Agri-Food Canada (AAFC) who led this project.

“There is a lot of potential to use genetics and breeding to modify the wax layer to help protect the plant, but this concept hasn’t been explored in much detail until recently. However, now we have the tools to look for the genes and do the chemical analysis. I think we are in a good position to see how far we can go to use wax as a way to better protect the plant.”

A close look at canola wax
Smith’s two-year project was funded by SaskCanola under the Canola Agronomic Research Program. When he began the project in 2018, little was known about the chemical composition, function and synthesis of canola’s waxy layer.

The project team, composed of Smith’s research group and some of his AAFC colleagues, started by conducting a detailed analysis to determine the amount of wax and its chemical composition across the different parts of canola plants.

Using modern mass spectrometry tools, the project team analyzed the waxy layer on a wide assortment of Canadian canola varieties. “We included varieties from modern cultivars back to some of the earliest ones in the history of canola, with registration dates ranging from 1966 to 2019,” Smith notes.

Their analysis shows that canola’s wax is made of a complex mixture of hydrocarbons – like the hydrocarbons in gasoline but much heavier and denser. All the canola varieties in the study have similar wax chemical compositions, but the amount of wax varies somewhat between varieties. As well, the wax composition is similar across the different parts of a canola plant, with the only significant differences on the petals. However, the amounts of wax vary over the different plant parts.

“If you compare canola to a plant like wheat, the wax on a wheat plant is quite different on different parts of the plant; for instance, the wax composition can be very different on a wheat stem compared to a wheat flag leaf,” Smith notes.

“There is a lot that we don’t yet know about the wax on these plants. For example, why does wheat have a very different wax chemical composition compared to canola, and why does the wax composition vary on wheat and not on canola?”

“We found that the wax of these other Brassica species is very similar to canola wax, but again there is variation in the amount of wax,” he says. “There is some variation in the chemical composition between the different species, but the difference does not involve a presence or an absence of particular components – just different ratios of the components.”

For four of these species, the team analyzed some representative varieties, but they conducted a more extensive examination of Brassica carinata varieties. That examination produced similar results to the canola analysis, including the fact that the petal wax has a different composition than the wax on the rest of the plant.

Connections to stresses?
Smith is curious about the difference in the petal wax because of a possible link to Sclerotinia infection.

“The canola petals are missing some of the main components of the wax on the rest of the plant. As petals are the primary site for Sclerotinia ascospore germination, I would be very interested in exploring whether the lack of some of the wax components makes the petals more vulnerable,” he says. If this hypothesis turns out to be correct, then perhaps canola breeding to modify the petal wax composition might be way to help reduce Sclerotinia in canola.

Smith’s project also included a preliminary look at how environmental conditions affect canola’s waxy layer. He notes, “Although we haven’t studied this in great detail, it is pretty clear from our work that, under hot and dry conditions, the plants definitely make more wax. It is a case of making more of the same wax, not a different wax composition.” Their initial findings suggest that further investigation of the environmental effects on canola wax could help in understanding the layer’s function and dynamics.

The genetics of canola wax
The project team used an innovative but labour-intensive method to identify canola genes involved in wax synthesis and regulation. Smith explains that canola’s wax is produced by the outer layer of cells, called the epidermis. With the help of some co-op students, the team peeled the epidermis off of some canola petioles (leaf stalks). Then they determined which genes were expressed in those petiole peels and which genes were expressed by whole petioles that included the epidermis.

“By looking for genes switched on only in the epidermis, we were able to get a good handle on which genes are involved in wax synthesis,” Smith says.

“We have identified genes that encode enzymes that make the wax and genes that are involved in regulating the wax, like how much wax is made and what its composition is.”

The aim of this work is to build a collection of possible gene candidates that could be used by breeders to manipulate canola wax. Potentially, once the roles of the different genes are determined, breeders could target certain genes in order to change the amount or composition of wax in their canola lines in ways that would improve the crop’s performance. 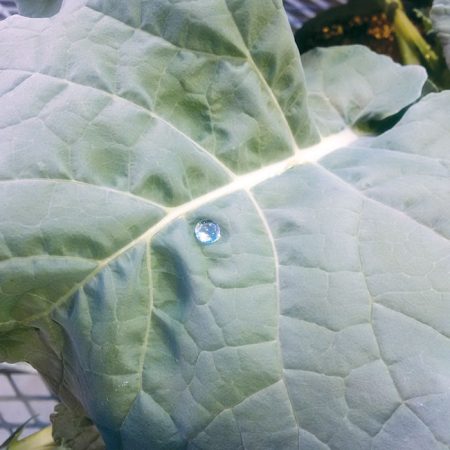 Smith is investigating canola’s waxy outer layer to see if it could be modified to enhance canola’s natural defences against
different stresses.
Photo courtesy of Mark Smith, AAFC-Saskatoon.

Looking ahead
At present, Smith’s research group is continuing to do some work on canola wax diversity and chemical analysis. However, he is hoping to get funding for some next steps in this research towards possible practical applications that could benefit canola crops.

One key aspect he would like to investigate is the different functions of the wax and whether those functions could be improved by modifying the wax amount or composition. For instance, a study could look at the role of wax in drought-proofing canola plants during hot, dry weather and whether the wax might be more effective at reducing water loss if it has a slightly different composition.

Smith is also keen on determining the role of the different wax components in the plant’s resistance or susceptibility to attacks by insect pests or pathogens. “One possibility we want to pursue is to isolate some of canola wax’s chemical components and then test those components in the lab against things like fungal spore germination. For example, we could germinate some spores in the presence or absence of some of the chemicals extracted from the leaf to see how that affects how the spores germinate,” he explains.

“Another possibility is to compare the waxes between different plant species. For instance, camelina has wax with some components that are completely missing in canola, and camelina also has different responses to pathogens and particularly insects. So doing interspecies comparisons might give us some clues as to what can be done to try and improve canola.”

If Smith’s team can identify wax characteristics that could improve traits like drought tolerance or pest resistance, then they could work on determining the genes involved and developing DNA markers for those genes so breeders could screen their breeding materials for the genes.

“The waxy layer on plants has clear importance,” Smith concludes. “If we can understand it better, then I think we can use it to make our crop plants more robust in their responses to challenging climate conditions and to disease and insect pressures.”