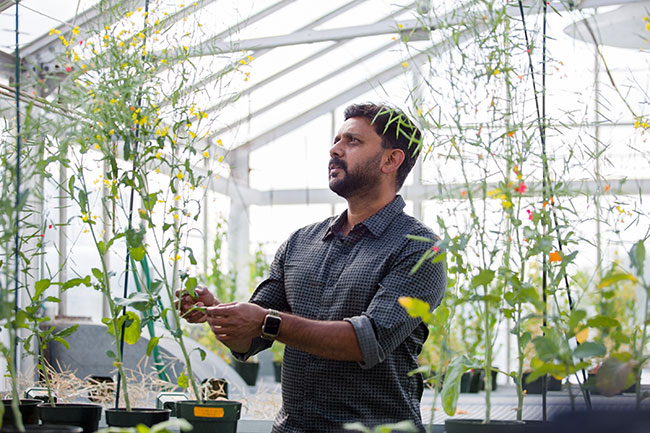 May you never have to live through another drought – but if you do, researchers are moving forward with drought-tolerant crops. While they wouldn’t be able to tolerate the 2021 drought that occurred in many areas of the Prairies, drought-tolerant canola and wheat varieties under development might help survive less severe droughts.

“What we are hoping for is that if a normal variety goes down in five or six days, then perhaps a drought-tolerant crop might last twice as long,” says Marcus Samuel, professor of integrative cell biology in the department of biological sciences at the University of Calgary. “Under water-stressed conditions, crop yield could be improved by at least 10 to 20 per cent.”

Samuel has been working on the technology for over a decade. In collaboration with the University of Toronto and the University of Tasmania in Australia, researchers uncovered the molecular mechanisms that control drought tolerance in a model plant species called Arabidopsis, a close relative of canola with 85 per cent similar genes.

Using genetic and molecular analysis, the researchers identified how drought tolerance is controlled by the interaction between two major plant hormones. The first hormone, abscisic acid (ABA), plays a role in drought tolerance and is important for closing stomatal pores found on the leaves. Stomatal pores regulate the exchange of gases, including water vapour, into and out of the plant. When ABA is increased in concentration, the stomatal pores are more closed and the plant loses less water.

The second is a group of steroid plant hormones called brassinosteroids (BR). These hormones interact with ABA, with higher levels of BR shutting down ABA activity, and the resulting stomatal pores remain more open. Plants with reduced BR levels were able to tolerate longer periods of reduced moisture.

The research team was able to figure out the molecular pathway involved in producing brassinosteroids, and how to target and modify them to achieve the right balance between ABA and BR. They were able to develop an Arabidopsis plant with normal plant growth but improved drought tolerance.

The next step was to put that research to work in canola. They developed a genetically modified canola plant, targeting the same molecular pathway found in Arabidopsis. Grown in the greenhouse, they compared these canola lines to normal lines to see if they functioned normally, and then selected the lines with the best drought tolerance. The researchers are in the process of developing non-GMO lines by using gene-editing technology.

“We had a proof of concept that showed we could develop a gene-edited, non-GMO canola plant,” Samuel says. “After crossing, there wasn’t any trace of foreign DNA used for gene editing, essentially making the process non-GMO.”

The group’s research was funded by the Natural Sciences and Engineering Research Council of Canada, and Samuel’s lab was also supported by the Alberta Crop Industry Development Fund Ltd.

Elite canola lines were selected in the greenhouse, but then COVID-19 hit and Samuel lost a lot of plants over the last two years. He is hoping that he will have his elite lines ready in 2022, and hopes to go to the field in another couple years. 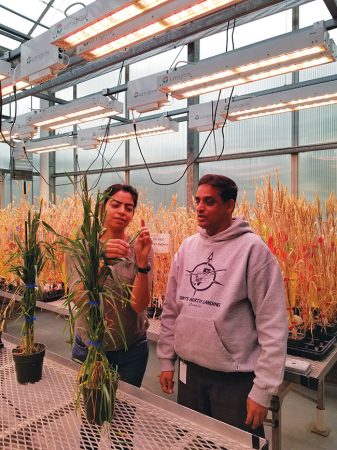 Up next: wheat
“We asked ourselves, why stop at canola?” Samuel says. He received funding from Genome Alberta to develop a proprietary chemical screen in wheat to help develop drought-tolerant wheat.

In collaboration with Raju Soolanayakanahally and Neha Vaid with AAFC-Saskatoon, the Samuel group was able to develop a mutagenized wheat population. This non-GMO process is called mutagenesis, in which a chemical is used to create random mutations in the wheat genome. They treated AC Taber wheat seeds with chemical mutagens, grew the seeds out in the field, harvested them, and looked for different mutations that conferred drought-tolerance.

Samuel and collaborators have screened over 100,000 mutagenized wheat lines for plants that are more drought-resistant.

Samuel’s group has selected more than seven drought-tolerant lines from the screening and tested them in field trials in the Okanagan in 2020 and 2021. These seven strong lines are the ones that he hopes to move towards commercialization, with expected funding from the Agricultural Development Fund in Saskatchewan and Agriculture Funding Consortium, Alberta.

“The idea is to move the traits into elite CWRS and CPS wheat lines,” Samuel says.

The drought-tolerant canola and wheat lines are still a few years away from farmers’ fields. In the meantime, here’s hoping the 2021 drought is an event that doesn’t occur again for many more years. Knock on wood.