Cultivar resistance is considered the most effective and practical approach for clubroot management on canola. However, almost all of the current cultivars were based on a single clubroot resistance (CR) gene, which can be eroded when the pathogen Plasmodiophora brassicae changes in virulence. 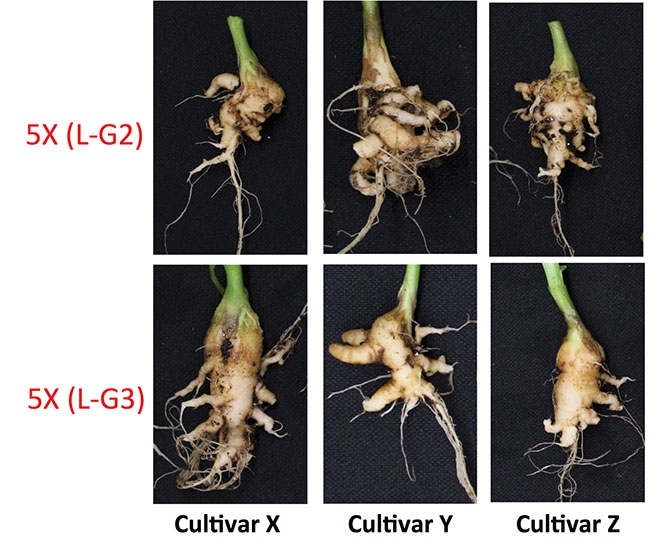 A new pathogen strain pathotype 5X, which began to appear in 2013 in some Alberta fields, was discovered to be virulent to each of the clubroot resistant cultivars in the marketplace. Researchers continue to work towards developing diversified clubroot resistance in canola.

“We are constantly looking for a new type of clubroot resistance that would be more broad spectrum and efficacious,” says Gary Peng, research scientist with Agriculture and Agri-Food Canada in Saskatoon. “Over the past few years several researchers have been searching for new resistance genes for clubroot, but have realized that many of the genes being mapped or characterized are fairly similar. Even though we find more genes on different chromosomes, when we look at their function against various pathotypes, there is no single gene that is really resistant to all of the pathotypes identified in Canada, particularly the new ones identified at the University of Alberta. The challenge remains, how are we going to proceed from here in terms of cultivar resistance?”

In a recent project, Peng and his team set out to assess if any of the CR genes previously identified would be efficacious against pathotype 5X of P. brassicae, and to explore various molecular and biochemical tools and advanced technologies, including transcriptome, proteome, metabolome and synchrotron-based FTIR spectroscopy that can be used for studying CR mechanisms. These technologies can be used to identify metabolic or signaling pathways relating to clubroot resistance, potentially differentiating the modes of action among different CR genes. The ultimate goal is to develop canola germplasm carrying more diverse CR genes for sustainable and durable clubroot resistance that could be incorporated into elite canola breeding lines singly or by stacking.

“We started this process looking at tools that we could use to assess the performance of different resistant genes, initially using transcriptome analysis (RNA sequencing) to compare overall differential gene expression between resistant and susceptible lines,” Peng explains. “Our initial assessment of CR candidates against pathotype 5X of P. brassicae began with screening of 24 resistant candidates (to pathotype 3) against mixed and single populations of pathotype 5X from Alberta fields where resistant cultivars failed in 2013. We identified several candidates resistant to mixed 5X populations, and the CR genes also showed resistance to all other P. brassicae pathotypes found earlier in Canada (pathotype 2, 3, 5, 6, 8). Through RNA sequencing, specific functional resistance genes involved with the clubroot resistance have been identified.”

Researchers explored various advanced technologies to better understand the resistance mechanisms associated with these newly identified genes. One of the key discoveries was that cell wall modification was strongly indicated, especially callose polysaccharides associated with cell infection by the pathogen. The callose deposit increases the strength of the cell wall against infection. To better understand the pathways associated with the callose deposition or production, Peng turned to synchrotron-based Fourier transform mid-infrared (FTIR) spectroscopy tools at the Canadian Light Source (CLS). A synchrotron is a source of brilliant light that scientists can use to gather information about the structural and chemical properties of materials at the whole tissue, cellular and molecular level.

“Through this FTIR technology, we were able to closely examine and analyze the various root cell wall components, even at the micro and nano scale,” Peng explains. “We were able to identify clear changes in the cell-wall composition of roots associated with the recently discovered CR gene Rcr1 as compared to susceptible roots, especially the increase in lignin composition. The gene BrPAL1 was confirmed to be responsible for the upregulation of cell-wall components, including lignin and phenolics, which may play a role in defense responses against clubroot, such as strengthening the cell wall itself and providing antimicrobial properties.”

This study has provided researchers with a new direction for looking at the deployment of CR genes. Combining traditional tools such as microscopy and other biochemical analysis with FTIR as a potential new rapid and precise screening tool can help speed up the process. “For example, we may be able to use specific regions, such as the cell wall modification we just identified, as a fingerprint for screening for resistance,” Peng says. “We can look at various mechanisms of resistance against different pathotypes and determine whether more modes of action can be involved. We can also assess how that will affect the longevity of resistance if we expose a stack of multiple genes to the same population of the pathogen.”

Researchers have also successfully developed a range of new and improved canola germplasms carrying single/multi CR genes against the new strain of P. brassicae pathotype 5X, as well as the common pathotypes found in Canada. The new CR gene Rcr6 appears promising against all pathotypes or variants recently found in Canada, but it will be more challenging to incorporate it into B. napus without sacrificing the yield or quality of canola varieties. However, it can be incorporated readily into B. carinata. CR genes on the A3 chromosome appeared less effective against pathotype 5X when used alone, but reduced clubroot development by approximately 80 per cent when combined with a CR gene on A8. To support the fight against clubroot in canola, several stable populations of CR B. napus germplasm carrying a single CR gene have been transferred to many breeding companies for the production of new resistant canola hybrids.

“We are discovering that the clubroot pathogen population is more diverse than what we knew before, and there will likely be further variants to be identified,” Peng adds. “Therefore, it will be important to better understand the resistance mechanisms with the CR germplasms developed for effective deployment. Resistance remains one of the most important components of our clubroot management package, and is most practical and easy to use. Research and breeding efforts will continue to develop new resistance materials, recognizing there is a limitation of resistance sources at the gene level. It takes time and a process to get these new resistance products out to the market. However, at the same time, new resistant hybrids won’t replace the good practices growers use, such as extending crop rotations, even by one year such as from a two-year rotation to a three-year rotation. Extending rotations brings down the inoculum levels quite significantly, which will help the performance of some varieties and help extend the durability of new resistant varieties as they are developed and commercialized.”