Weed genomics could be another pathway towards new ways to control herbicide-resistant weeds. 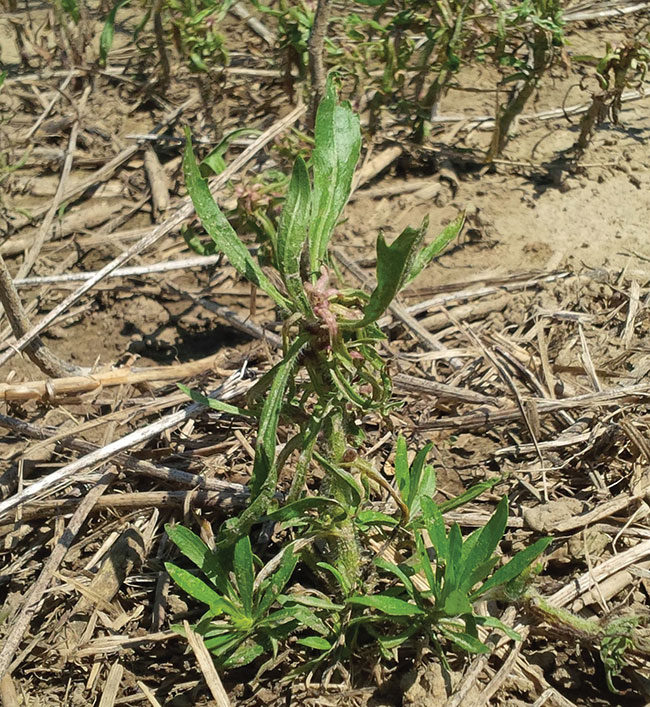 Although weed genomics has lagged behind genomics research on crops and crop insect pests and pathogens, work in this area is beginning to accelerate. This growing effort includes advances by a group of weed scientists at Agriculture and Agri-Food Canada (AAFC).

These researchers recently produced a complete map of Canada fleabane’s genome – an invaluable tool for understanding fleabane’s different mechanisms of resistance to glyphosate (Roundup) and a possible first step in developing novel ways to control this tough weed.

A bit about weed genomics
So far, complete genomes, called reference genomes, have been published for a limited number of weed species. Many other weed species have draft genomes where researchers have sequenced a number of pieces of the genome, but more work is needed to complete the mapping and assemble to pieces in the correct order.

For some research purposes, a sequenced portion of a genome or a draft genome is sufficient. However, for more comprehensive, detailed analyses, a complete genome is needed.

“Often, where a weed genome has been sequenced is where the weed has a crop relative with a sequenced genome,” notes Eric Page, a weed ecologist and crop physiologist with AAFC in Harrow, Ont., and a member of the AAFC weed genomics group. “For example, the genomes for some pigweeds, such as waterhemp, have been assembled against the genome for grain amaranth.”

Martin Laforest, a lead researcher in the genomics group, notes that a key reason for the lag in weed genomics is that, in the past, there was little practical incentive to sequence weed genomes.

“As long as you are able to control weeds, why invest in doing genomics research on them? It’s important to know the genome of a crop so we can improve its yield, tolerance to pests and so on, but for a weed?” says Laforest, a molecular weed scientist with AAFC in Saint-Jean-sur-Richelieu, Que.

Page points out that other crop pest management disciplines, like pathology and entomology, have more readily adopted genomics because genome sequencing is so useful in identifying and characterizing the organisms of interest to them.

Drivers for weed genomics’ growth spurt
However, these days there is a strong motivation for weed genomics, Laforest explains, due to “the increasingly serious problem of herbicide-resistant weeds and the need to find new ways to control these weeds.”

Genomics might prove helpful at improving weed management in other ways. For instance, some researchers are using genomic approaches to understand shifts in weed populations. Such studies might provide insights into how to modify crop management practices to discourage unwanted shifts. Laforest highlights another possibility: “This is a very long-term goal, but if we can learn more about how weeds are so competitive – they are hard to kill, hard to control – maybe we can apply this knowledge to improve the competitiveness of our crops. That could mean we would use less pesticide in the future.“

Another key catalyst for the upswing in weed genomics is the rapid rise in accessibility of genomic technologies.

“In the 30 years since the Human Genome Project was initiated, there has been a revolution in sequencing technologies. It seems like there is a new sequencing platform every couple of years that is able to deliver longer and longer reads [of adjoining parts of a genome] at cheaper and cheaper prices. In some cases, the cost of sequencing has finally gotten down to the point where it is within our budgets as weed scientists,” Page says.

Laforest adds, “When the human genome was sequenced from scratch it cost roughly $2.7 billion in 1993 dollars. In 2002, sequencing the maize genome cost about $52 million dollars. Nowadays sequencing a genome from scratch can cost anywhere from $25,000 to $50,000, depending on the size of the genome.”

Current sequencing technologies, called third-generation or long-read sequencing, make it much easier to assemble a complete genome, compared to earlier technologies that were only capable of reading short pieces of DNA. “Quite often a genome has repetitive DNA, which makes it really hard to assemble the pieces of the puzzle to create the complete genome,” Page explains. “A short-read sequence is like having a normal-sized puzzle piece, while a long-read sequence is like having three or four puzzle pieces already correctly assembled.”

However, he notes, “Having the platforms to do whole-genome sequencing is one thing; having the expertise to handle the very large and complex datasets thereafter is a whole other ballgame. [Few weed scientists have this expertise at present.] My colleagues Sara Martin [another member of the AAFC weed genomics group] and Martin Laforest are well-versed in bioinformatics, but they have backgrounds in other fields of study where they received that training.” Addressing this training gap for the next generation of weed scientists will help towards ongoing progress in weed genomics.

Mapping resistance genes
“Completely sequencing a genome is only the first step in genomics research,” Laforest says. “You have to use this reference genome as a blueprint where you can place the markers associated with the different traits.”

A top priority for many weed genomics researchers is to map the genes responsible for herbicide resistance. To do this, they compare populations of the weed that are resistant and populations that are not resistant to pinpoint the locations in the genome associated with the resistance.

“An interesting aspect of this revolution in sequencing technologies is that, once a fully sequenced genome is available, we have to go back to very old science to create the germplasm necessary to use the very new genomics data,” Page says. “We have to create segregating populations – old-school crossing of plants, growing them up, screening them, counting their numbers – to use the genome to map the location of genes associated with specific traits.”

Mapping a herbicide resistance trait has practical implications. For instance, it enables researchers to develop DNA markers for the trait. Those markers are not only useful in further genomic studies but also for rapid screening of weed samples. So, rather than conducting laborious, time-consuming greenhouse tests of samples, testing facilities can much more quickly let growers know if resistant weed populations are in their fields. 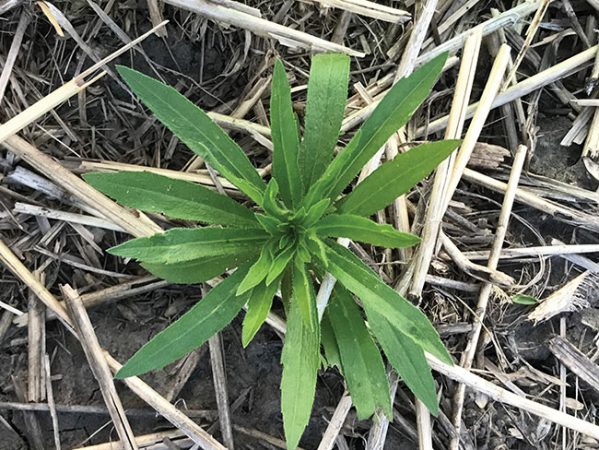 Canada fleabane is a problem across North America and other parts of the world; glyphosate-resistant Canada fleabane is widespread. Photo courtesy of Tammy Jones, Manitoba Agriculture and Resource Development. 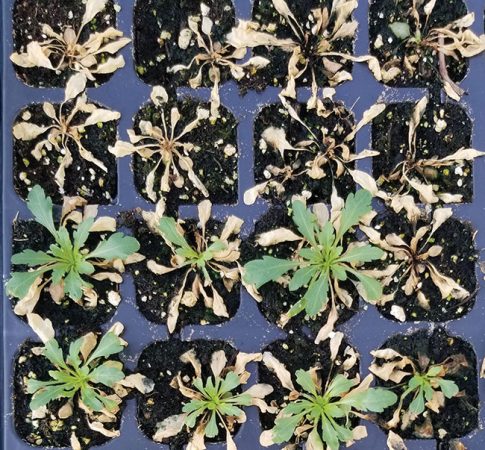 Segregating populations of Canada fleabane after a herbicide application, like the one shown here, can be compared to locate the genes associated with the resistance. Photo courtesy of Sydney Meloche, AAFC. 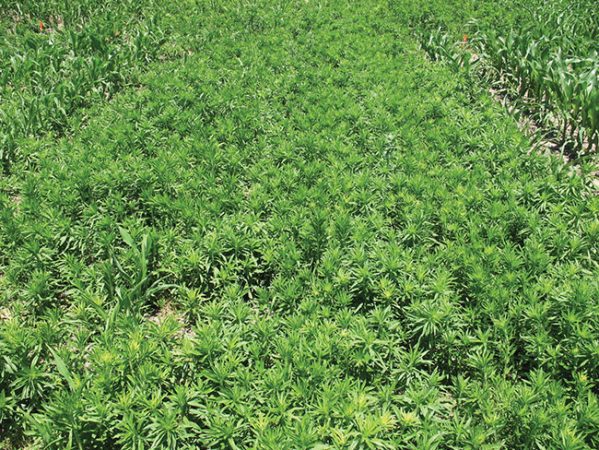 Although a draft genome for Canada fleabane was published in 2014, the whole genome was not mapped until recently by the group of AAFC weed researchers. Photo courtesy of Peter Sikkema, University of Guelph, Ridgetown Campus.

Deciphering Canada fleabane resistance
Although a draft genome for Canada fleabane was published in 2014, the whole genome was not mapped until the AAFC researchers conducted their work.

“We used third-generation and second-generation sequencing to create a complete map of the genome,” Laforest says.

“I compare it to a map of Canada. Before, we had a map of the cities, but we didn’t have the information about where the cities were located in relation to each other. Now we have basically mapped all the cities onto a bigger map, so if we want to go from Edmonton to Ottawa for example, we now know the best way to do that.”

Laforest and Page are particularly interested in traits associated with fleabane’s glyphosate resistance. Their research is investigating both types of resistance: target-site, and non-target-site.

According to Laforest, the target sites of the most commonly used herbicides (Groups 1, 2, 5 and 9) are already known. So researchers just need to sequence a very small region of the genome where the target gene is located and look for mutations that provide the resistance. Weed scientists have been doing this type of work for a number of years.

Page adds, “In non-target-site resistance, you have a whole plethora of possibilities as to what has changed in the weed to make it resistant. It could be anything from something that metabolizes the herbicide, to a transporter that sequesters the herbicide or doesn’t allow the herbicide’s translocation to the target site. Having a complete picture of the genome can really help with the identification of these resistance mechanisms.”

Identifying the resistance mechanism is an important step in beginning to answer applied questions around how to avoid or overcome the resistance.

The AAFC researchers have annotated their Canada fleabane sequence with the locations of genes known to be associated with glyphosate resistance in the weed, but this task is ongoing.

“In the United States, where resistance to Roundup was first reported in Canada fleabane, it was reported as a non-target-site mechanism. They suggested it was a transporter-based mechanism, but they could not nail it down to a specific transporter. That was in part because they didn’t have a high-quality reference genome,” Page explains.

“Genomics may help us unravel these complexities. So one of the things we are working on is fine-scale mapping to identify Canada fleabane’s other mechanisms for resisting Roundup.”

Page stresses the importance of this work: “Canada fleabane is widespread across almost all of North America and around the world, and resistance to Roundup is also widespread, particularly in Canada and the United States. Regaining even a portion of the product’s efficacy would be a very significant gain.”

Towards new tools for fighting weeds
“The genomics work that we have been doing is a continuum,” Laforest says. “First, we need to understand what is going on in the plant when you apply a herbicide and the plant doesn’t die. Then we can say, ‘OK, it’s this gene that causes the resistance.’ Then we can develop a test for the gene and advise producers if this resistance is present in their field. And then they can act on that information.”

Page gives another example: “Some non-target-site mechanisms, such as something that metabolizes herbicides, can result in cross-resistance to different herbicide modes of action. That might result in advice to crop growers: this specific herbicide group is no longer effective on the weed, plus this other group is also not effective.”

Laforest notes that the next logical step in the continuum is to devise new ways to control the weed based on the knowledge gained from genomics. The AAFC researchers are starting to look into this next step.

In fact, Laforest has already proposed a project to try to develop a weed control method based on the use of RNA interference, or RNAi, to silence key genes in the weed.

“For instance, you could design an RNAi that will take down the expression of a weed’s mechanism of herbicide resistance. Then you could add that RNAi to a herbicide spray. By applying the spray, you would negate that mechanism of resistance and recover the herbicide’s activity,” Page explains.

Laforest emphasizes that developing RNAi weed control is a long-term effort. “Of course, if it was easy it would already be done!”