"If a drought occurs, you’re looking at more than 20 to 30 per cent losses in any crop. A drought-tolerant crop variety is almost like crop insurance. If you’re hit with a major drought every one out of three years, and you have drought tolerance as an added trait – along with the multiple traits in your elite canola variety – then that’s like insurance that will help protect you,” says Marcus Samuel, an associate professor at the University of Calgary. 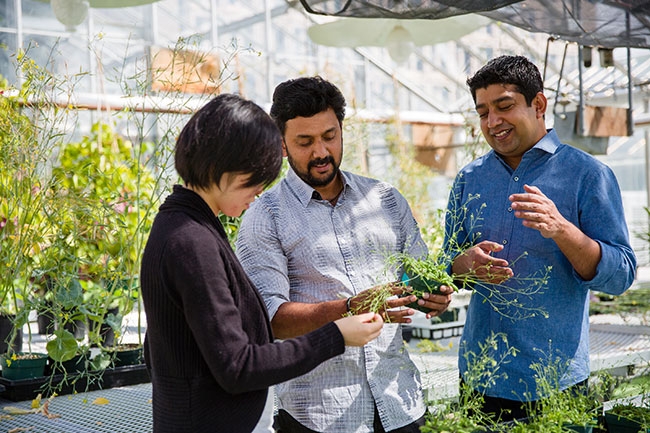 Marcus Samuel (centre) and his research group If a drought occurs

Samuel is leading a project to develop drought-tolerant canola. His research group works in plant molecular biology, focusing on plant hormones and how those hormones interact to enable a plant to survive difficult conditions, such as drought. His group is also making progress in developing other important traits in canola, such as green seed tolerance and shatter tolerance. He notes, “I have this passion for moving novel technologies from plant biology into applicable platforms in crops.”

For the drought tolerance research, Samuel and his collaborators at the University of Toronto and the University of Tasmania conducted the first stage of their work with a plant in the Brassicaceae family (the same family as canola) called Arabidopsis.

“Because they are closely related at the gene sequence level, we can apply our findings from Arabidopsis onto a crop plant like canola,” he notes. “Also, it has a small genome that is well studied because it was the first plant genome ever sequenced, so it’s a great starting place for plant research at the molecular level.”

Abscisic acid is important in a diverse range of plant processes, including responses to environmental stresses. Samuel explains, “ABA plays a role in many physiological responses that affect drought tolerance. [For example,] ABA is important for closing stomatal pores. [These pores are found mainly on plant leaves and are used for the exchange of gases, including water vapour, into and out of a plant.] If the stomata are open, the plant loses water. If the ABA response is highly upregulated, then the stomatal pores are more closed and the plant doesn’t lose water as quickly. So, under drought conditions the plant can sustain itself longer.”

Through genetic and molecular approaches, and testing of the resulting transgenic plants in growth chambers in the lab, the researchers have shed new light on the interplay between ABA and brassinosteroids. “We figured out that every time brassinosteroid was present with abscisic acid, it would shut down the abscisic acid responses. So, these two hormones were talking to each other and playing an antagonistic role in controlling each other’s responses,” Samuel  explains.

“Essentially, we found that if you can reduce the levels of brassinosteroid, then you can improve drought tolerance in the plant because now you are upregulating the ABA responses in the plant. And we found the players that are important in this response.”

After about 10 years of work, the researchers have nailed down all the details of the molecular pathway involved in producing brassinosteroids in the plant and their interplay with ABA. They have also determined which particular components of that pathway to target and how to modify them to produce an Arabidopsis plant with just the right balance between brassinosteroids and ABA so the plant’s normal growth and functioning remain unimpaired but it has improved drought tolerance.

“The technology won’t be a silver bullet for drought, allowing the plant to survive even if you have no water for three weeks,” he notes. “But if a normal plant would sustain a drought for seven days, you could push that limit to about 14 days with the new technology. So, the plant would survive with less water.”

The team’s first step will be to see if the technology developed in Arabidopsis will work in canola. “We have to be very careful when we tweak the brassinosteroid response,” Samuel explains. “There are multiple enzymes in the pathway, so we have to test out a few different targets.”
“[We also need to] make sure the plant looks the same, yields the same, all the traits are the same, but in addition to that, it is also drought tolerant.”

Similar to the research with Arabidopsis, Samuel’s group is doing tissue culture work to make genetically modified (GM) canola plants. Then they will grow these plants in growth chambers to see which ones grow and function normally. From there they will select the ones that perform well and see how they respond to drought conditions in the growth chambers.

Findings from Arabidopsis are enabling the canola research to progress more quickly. “The genes are about 85 per cent similar between Arabidopsis and canola,” he says. “We just started this work in canola last year, and we already have new transgenic canola plants coming through our pipeline right now. Once we confirm they are good positives, we will be testing them in the next few months.”

After the researchers confirm that their drought tolerance technology works very similarly in canola, their next step will be to see if they can use a non-GM approach to make the same genetic changes in the plant. A non-GM version of the trait would be more readily accepted on the international marketplace. Samuel explains, “There are the strict regulations on the GM traits that go into canola seeds. The regulatory bodies won’t immediately accept this new trait if it is a GM technology.”

He is considering various non-GM methods to bring about the required changes in the canola genome.

Once the researchers have a developed a non-GM version of the trait, they hope to partner with a canola seed company and incorporate the added bonus of drought tolerance into the company’s canola varieties. Samuel emphasizes, “I don’t want this novel finding to just stay in Arabidopsis. I want this to be translated into canola and applied so canola growers will benefit.”