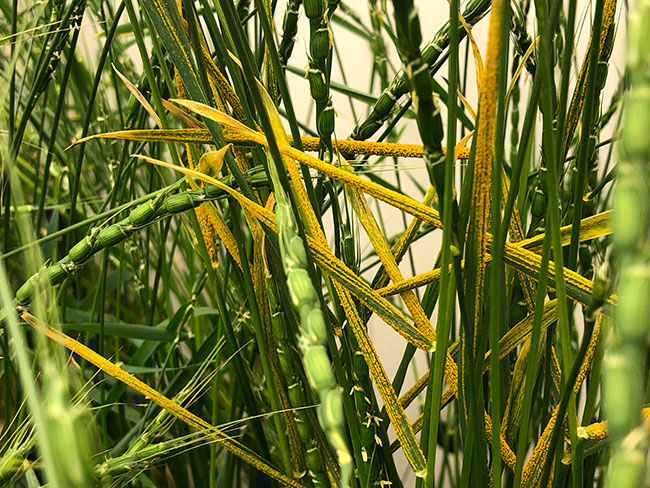 Stripe rust is an important disease of cereals that doesn’t cause economic loss every year, but huge losses can occur in any given year as new races emerge. Resistant varieties are the most economical and effective strategy for disease management, however new races of this pathogen can rapidly increase in frequency and, as a result, varieties resistant upon release often become susceptible after a few years. The emergence of novel, warm temperature-adapted aggressive races of stripe rust are currently causing epidemics on the Canadian Prairies, and in other countries. Therefore, regular and frequent pathogen characterization is very important, as well as the identification of novel sources of stripe rust resistance.

“We began identifying and characterizing the stripe rust pathogen population in wheat about 10 years ago, after a very severe disease outbreak in the fall of 2010,” says Randy Kutcher, research scientist, cereal and flax pathology at the University of Saskatchewan (USask). “This was the worst stripe rust year that Saskatchewan had experienced and even in Alberta, who were more familiar with stripe rust in irrigated soft white wheat. We collected pathogen isolates from across Saskatchewan and other provinces in 2011 to 2014 and compared them to see what resistance genes were effective. We also classified the isolates into races based on reactions to resistance genes available. This characterization work helps us understand if the pathogen is changing or if new races are evolving and whether current resistance genes are still effective.”

In 2019, a new project was initiated to build on that earlier work to continue to ensure researchers understand the pathogen and breeders have robust resistance genes for their breeding programs. The majority of Canadian wheat cultivars carry adult-plant resistance genes, but used individually they are not effective enough to prevent an epidemic under high disease pressure, and warmer climates. Kutcher explains this new project has three main components, including traditional collection and characterization of the rust pathogen population, along with the identification and cloning of new durable rust resistance genes from wheat wild relatives. A third component is to complete the sequencing of pathogen isolates to better understand how the pathogen evolves to overcome race-specific resistance genes. The ultimate goal is to identify effective wheat resistance genes to the most predominant races for use in breeding programs.

“The project is a collaboration between our USask Cereal Pathology Lab and Gurcharn Brar’s Crop Pathology and Genetics Lab at the University of British Columbia (UBC),” Kutcher explains. “We worked on similar research projects while Gurcharn was completing his PhD at USask and are continuing to work together now that he has moved to UBC. We are collaborating on all aspects of the project, with most of the pathogen characterization being completed here at USask with master’s student Kun Lou, while isolate sequencing and the identification of new rust resistance genes is being carried out at UBC.”

Stripe rust isolates were collected from across the Prairies in 2020 and 2021. Although the identification and characterization is underway with a reasonable number of isolates, the collection in 2020 was limited due to the very dry conditions. Additional field isolate collections are planned for the 2022 field season under hopefully better growing conditions. Kutcher notes they are using a more traditional phenotyping process to classify and characterize the isolates collected to try to determine if they are similar to the ones identified 10 years ago or if there have been changes in virulence. To differentiate races of the pathogen, 20 near-isogenic wheat lines in the ‘Avocet’ background developed by researchers in Australia are being used. These identical lines vary only by a single gene for resistance to stripe rust, which differentiates the pathogen races and whether or not there have been changes in virulence within the pathogen population. A few additional winter wheat and local spring wheat varieties or genetic stocks will also be included. Some of these genetic stocks or lines are currently being used by breeding programs to build stripe rust resistance in future cultivars.

“We have also included some wheat lines used by researcher Xianming Chen at Washington State University and others from Europe and Australia to compare our results to those from these countries and continents,” Kutcher adds. “Disease pressure of stripe rust in the Prairies is highly dependent on the disease levels in the United States. The Pacific Northwest states can be a source of the air-borne stripe rust pathogen because the pathogen overwinters there and can move into Western Canada the following spring depending on prevailing winds and environmental conditions. Therefore, we are interested in comparing the larger collection of stripe rust races to what we are finding on the Prairies. Our preliminary results show that so far many of the effective resistance genes we currently have are similar to those that were effective 10 years ago. Once we have finished screening all of the isolates we can say for sure whether the isolates are similar or there have been changes in virulence, and which races we have on the Prairies.” 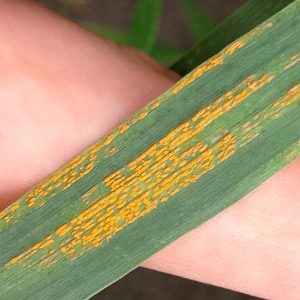 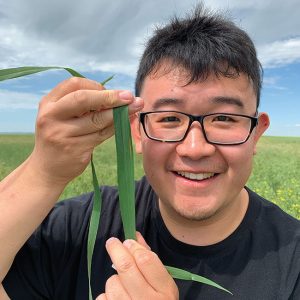 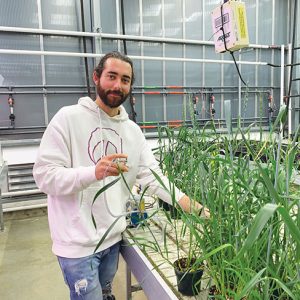 Once the screening and virulence phenotyping of all of the pathogen isolates collected in Western Canada is completed, then some of the isolates will be sent for sequencing. “This will help us understand whether the isolates are genetically similar based on the sequence data, and also help in comparing with pathogen lineages from other locations,” Kutcher explains. The genomic sequencing doesn’t necessarily show the differences in pathogen virulence, but can show their genetic similarities and differences. These findings along with new rust resistance gene development will support and inform breeding programs of stripe rust resistant wheat cultivars going forward.”

At UBC, Brar is leading the work on identifying new rust resistance genes from wild wheat relatives. “The modern bread wheat we use today has three sub-genomes, A, B and D, with the D sub-genome coming from wild wheat progenitor Aegilops tauschii. Our modern day varieties only utilize about 25 per cent of the total variation in the D genome, leaving a lot of potential diversity unexplored and unexploited,” Brar says. “In collaboration with U.K. colleagues at The John Innes Centre who were working on other traits, we are using a panel of 151 of the most diverse wild wheat accessions to screen for stripe rust resistance. All of these lines have been sequenced, so we have genomic information for every accession we have screened. So far, we have discovered two novel genes that were previously unknown, and one that has proven to be effective against all of the stripe rust races we have screened. Although it isn’t possible to screen with every race, we have screened against more than 26 of the races combined from Canada, the U.S., plus some from the U.K., China and Egypt. This new gene has proven to be very effective against all of the races we screened and we are interested in finding out more as we continue our analysis to discover more genes from the panel. An additional two genes have been identified as potential candidates, but we need to do more research.”

Brar adds, this new gene will be very helpful to breeders and some of the wild wheat accessions have already been shared with bread wheat breeder Pierre Hucl at the USask Crop Development Centre. Although it is still at an early stage, these new accessions have already been used in making crosses and developing new materials. Potentially that means new varieties with this effective stripe resistance gene could be commercially available in 15 to 20 years.

“Our long term goal is to discover something that is helpful for breeders and researchers to develop disease resistant varieties,” Brar adds. “The breeders are doing a very good job of building resistance in varieties and already have very good resistance in our current varieties. However, the pathogen is very clever and moves much faster than we can. The pathogen can evolve and defeat the resistance that is effective today, but might not be effective five years from now. Therefore, we need to have ongoing research to discover new genes and new sources of resistance, so breeders always have options. Through this project and related research at both of our labs at the USask and UBC, we are doing our small share to support plant breeders by identifying new genes and associated molecular markers. The development of stripe rust resistant wheat cultivars is the ultimate goal of our project, which should minimize the use of fungicides, and save millions of dollars for western Canadian wheat growers.”