Stripe rust is a fairly new fungal leaf disease that has been spreading throughout the province and slashing yields in susceptible varieties. While there are fungicides available, researchers are working towards stripe rust resistance in winter wheat for Ontario, preparing to combat the rise of more aggressive pathogen races. 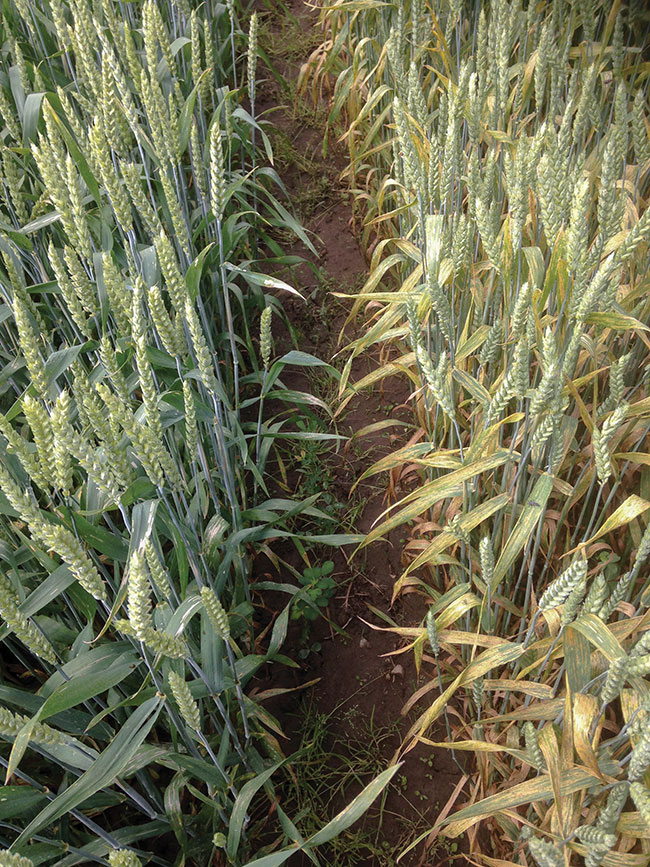 The winter wheat variety on the right is severely infected with stripe rust while the one on the left is resistant. PHOTOs COURTESY OF Mitra Serajazari, University of Guelph.

Wheat stripe rust was first detected in Ontario in 2000, but this fungal leaf disease didn’t cause significant impacts in the province until 2016. That year, some areas reported yield losses as high as 40 bushels per acre for susceptible winter wheat varieties.

In response to the 2016 outbreak, Alireza Navabi, an associate professor in plant agriculture at the University of Guelph, added stripe rust resistance as a new objective in his winter wheat breeding program. The aim is to develop varieties that have resistance to both stripe rust and Fusarium head blight, the program’s other key disease resistance objective.

Stripe rust, also known as yellow rust, is caused by Puccinia striiformis. Like other cereal rust pathogens, it is able to produce huge numbers of spores that can be carried for long distances by the wind and has the potential to cause devastating crop losses. Stripe rust looks similar to leaf rust, but in stripe rust, the pustules are yellowish orange and run in stripes parallel to the leaf veins, whereas in leaf rust, the spores are reddish orange and are scattered across the leaf.

“In 2016, Puccinia striiformis was widely distributed in the wheat growing areas in the Canadian Prairies and in southwestern Ontario, to a level that was never seen before,” explains Mitra Serajazari, a research associate in Navabi’s program.

“It was hypothesized that this wide distribution of the stripe rust pathogen in Canada in 2016 was due to 1) a warmer winter allowing the pathogen to overwinter farther north in North America, and 2) the prevalence of more aggressive races of the pathogen that can tolerate higher spring/summer temperatures.” These newer races first arrived in North America in 2000 and have since replaced most of the older races that used to be found in the U.S. and Canada.

Serajazari says, “When development of an aggressive race is combined with the presence of a susceptible crop variety and optimum environmental conditions, rust epidemics can happen immediately.” So, although fungicides are available for managing stripe rust, resistant wheat varieties are a very valuable tool for controlling this disease, especially with the rise of these more aggressive races.

Navabi and his research team are currently developing the information and tools needed to breed stripe rust-resistant winter wheat varieties for Ontario. This project is funded by Grain Farmers of Ontario, the Ontario Ministry of Agriculture, Food and Rural Affairs (OMAFRA) and the University of Guelph.

One of the studies in this project involves monitoring the stripe rust races in Ontario so the researchers will be able to develop varieties with resistance to those races.

So far, Navabi’s team has collected or received 80 samples from 20 locations across Ontario. To identify the races, they test the samples on a set of 42 differential wheat lines. These lines carry different stripe rust resistance genes so they respond differently to the different races.

Serajazari notes that there is no evidence that the stripe rust pathogen overwinters in Ontario. Instead, the spores are blown into the province from the United States.

“Our results have shown that the Ontario races resemble races from central and eastern United States,” she says. Most of the races found in Ontario are the more aggressive ones that are better adapted to warmer temperatures.

Through this work, the researchers have identified several stripe rust resistance genes – called Yr genes – that would work for Ontario. Serajazari says, “The results suggest that the seedling resistance genes Yr1, 5, 10, 15, 24, 26 and 28 are effective against the current prevalent races in Ontario.”

Navabi and his team would like to add both adult-plant and all-stage resistance genes into the program’s breeding lines. Having both types of stripe rust resistance in individual varieties would help to provide resistance that is both strong and durable.

In another component of the project, Navabi’s team is evaluating many winter wheat varieties and lines in the field for all-stage and adult-plant resistance to find plants that could be used for making crosses to add stripe rust resistance into the program’s breeding lines.

They have also tested 430 wheat lines and cultivars from the Canadian Winter Wheat Diversity Panel (CWWDP). This unique germplasm collection, which was developed by one of Navabi’s PhD students, includes a wide range of historic and modern winter wheats from across the country. Navabi’s team has genotyped all the lines in the CWWDP.

The researchers have found that 56 per cent of the CWWDP lines have varying degrees of adult-plant resistance to stripe rust. Less than five per cent carry effective all-stage resistance.

Navabi and his team are also conducting genomic work to detect locations along the winter wheat genome that are related to stripe rust resistance. This work can lead to the development of molecular markers. Such markers would enable efficient, accurate screening of breeding materials in the lab, avoiding the laborious work of growing thousands of plants, exposing them to the pathogen, and measuring their disease responses.

Using the genotypes in the CWWDP, the researchers applied a technique known as a genome-wide association study to see if any particular genetic variants occurred most often in genotypes that have stripe rust resistance. As a result, they have identified eight potential locations in the winter wheat genome associated with all-stage resistance and one location associated with adult-plant resistance. 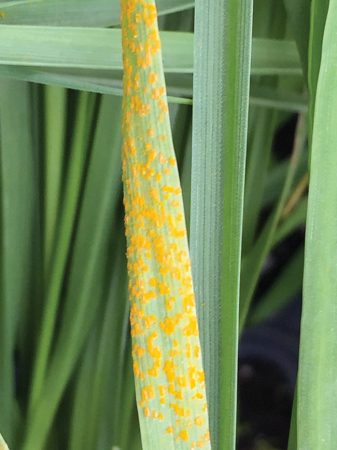 This stripe rust infection occurred at the seedling stage.

The research team is also using another technique for mapping the location of resistance genes. This approach involves developing what are called recombinant inbred lines and then comparing those lines with each other. To create these lines, they have crossed a resistant wheat variety, Priesley, and a susceptible wheat variety, Venture.

The researchers now have a set of 250 inbred lines that they will be evaluating for adult-plant and all-stage resistance in the greenhouse and the field. Then, each line will be genotyped and analyzed against the disease response data collected in the field and greenhouse. This analysis will enable the researchers to figure out where the resistance is located in Priesley’s genome and to develop markers for that location.

Another study in this project is gaining a better understanding of the interactions between Puccinia striiformis and its winter wheat host at a molecular level – fundamental work that will help in fighting the pathogen.

“We have a spectrum of different reactions to stripe rust in our wheat cultivars, from extreme susceptibility to moderate tolerance and finally full immunity. How mechanistically, at the genetic level, these diverse defense reactions are controlled in wheat is not yet entirely known. Unravelling key defence genes and pathways in these resistant plants will provide valuable building blocks for our existing and future breeding programs,” explains Hamed (Soren) Seifi, another research associate in Navabi’s program.

“What is known is that there are promising plant resistance sources available against stripe rust, but what is not known is the molecular mechanisms underpinning resistance response. For instance, [an Australian wheat genotype known as Avocet-YR15], which harbours the Yr15 resistance gene is fully resistant to several virulent strains of stripe rust. In our lab, we have tested three different isolates of stripe rust on Avocet-YR15 plants. These plants are showing full immunity – absolutely no symptoms – against these isolates.”

He notes, “To unravel the resistance mechanism in Avocet-YR15 at the molecular level, we are conducting a transcriptomics study (a high-throughput gene expression analysis in an organism). The genome of wheat is very huge, more than five times bigger than that of humans. It is also exceptionally complex. Therefore, to be able to analyze such genetic codes, we needed to use high performance computing cloud services.”

This study had two phases. “In the first phase, we performed several infection trials, in vitro assays, microscopy analysis and finally RNA extraction and sequencing. In the second part, we analyzed the raw RNA sequencing data using different bioinformatics tools on our high performance computing cloud to make sense of the wheat gene expression profile during the resistance reaction to stripe rust,” Seifi says.

“We have already concluded both phases and were able to generate some promising and novel results. We are currently doing some lab experiments to validate our findings.”

Overall, Navabi’s stripe rust project is contributing to increased information on the stripe rust races in Ontario, the genetics of stripe rust resistance and pathogen-host interactions, and to the development of new tools for breeding winter wheat varieties that have the right combinations of resistance genes to provide strong, durable resistance to stripe rust.