Although stripe rust is not a new disease, it was rarely considered an economic concern, except in some irrigated crops in southern Alberta. However, in 2011 stripe rust caused serious economic impacts in both Saskatchewan and southern Alberta. Unusually high spring precipitation resulted in high moisture conditions in spring wheat crops, which created favourable crop canopy conditions for the pathogen. Another factor was the large diversity of pathogen races that appeared in 2011, including a race virulent on Yr10, a major gene in the popular winter wheat AC Radiant. Researchers are trying to learn more about the disease and find ways to help both plant breeders and growers manage the disease. 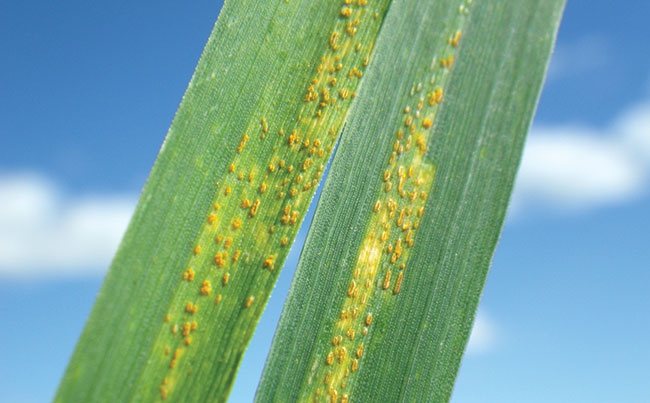 Stripe rust pustules on winter wheat leaf. Although stripe rust is not a new disease

Randy Kutcher, associate professor of cereal and flax pathology at the University of Saskatchewan, has a few projects nearing completion looking at various aspects of stripe rust, including pathogen characterization, temperature effects and fungicide timing. “In field surveys, we are finding stripe rust every year across the Prairies, but nothing like the 2011 crop year, which was the worst year of infection in many years. Although field surveys show stripe rust continues to be widely distributed, the disease levels have been much lower since 2011 and in most cases, a fungicide application hasn’t been necessary in Saskatchewan crops.”

One of the challenges of stripe rust, and other pathogens, is the variability of pathogen populations and the potential for the development of new, more virulent races, which have been little studied in Western Canada. Kutcher and PhD graduate student Gurcharn Brar recently finished a project analyzing and characterizing stripe rust pathogen isolates collected from Saskatchewan and southern Alberta between 2011 and 2013 for virulence. Fifty-nine isolates of P. striiformis f. sp. tritici were analyzed for virulence frequency and diversity and compared with isolates characterized in the Pacific Northwest and Great Plains regions of the United States. Most of the rust diseases in Saskatchewan and Alberta arrive on wind currents from rust-infested cereal regions in the U.S., either from the Pacific Northwest or via the “Puccinia Pathway” from the southern and Great Plains regions, typically arriving a bit later in the spring.

“The study results, which were recently published, indicate that although the isolates in Alberta and Saskatchewan are similar, there are some subtle differences in virulence between these regions,” Kutcher says. “In southern Alberta, most of the isolates represented races from the Pacific Northwest, however in Saskatchewan, the isolates were a mixture of inoculum from both the Pacific Northwest and the Great Plains regions of the U.S. This may also be a reason why some winter wheat fields in Alberta seem to [get] infected earlier: possibly from overwintering inoculum, something we haven’t confirmed to date in Saskatchewan. This overwintering potential, the early stage susceptibility of wheat varieties and the potential green bridge between winter and spring wheat may result in more stripe rust epidemics and make regular and frequent pathogen characterization very important.”

In a separate study, Kutcher also looked at temperature and its effects on the stripe rust pathogen. Isolates collected prior to 2000 were compared with more recent isolates to see whether newer isolates may be more tolerant to warmer temperatures. “Speculation worldwide is that pathogens seemed to make a big change after 2000, not just in North America, but worldwide,” Kutcher says. “Although not completed, our data collected so far shows that newer stripe rust isolates still tolerate cooler temperatures better than stem or leaf rust, but seem to have become adapted to warmer summer temperatures better than older stripe rust isolates. This may explain why stripe rust is becoming more of a problem. It’s not just the development of new races in terms of overcoming resistance, but the pathogen may be more adapted to warmer temperatures and has become a problem across North America and Europe. Recently in Europe, new races of stripe and stem rusts have been identified and new races appear to be much more aggressive than older races – something we need to keep an eye on in Western Canada.”

Fungicide timing for control of stripe rust
In another important study, Kutcher and graduate student Tatiana Vera Ardila evaluated fungicide application and timing to control stripe rust in wheat in Saskatchewan. The project field trials, which used similar protocols to other studies completed in Alberta, wrapped up at the end of 2015, providing several years of data for comparison.

“The results showed that the optimal timing for fungicide application for control of stripe rust in spring wheat seeded in May was at early flowering or anthesis stage, similar to timing for Fusarium,” Kutcher explains. “An application at this timing when the pathogen is starting to build up and pustules are beginning to form provides good control of stripe rust. However, for later seeded crops for whatever reason, such as into June, fungicides might need to be applied earlier at the flag-leaf stage or before the head comes out. In southern Alberta, seeding often begins earlier and therefore the optimal timing for stripe rust may also be earlier.”

Efforts are underway by plant breeders to better understand which genes are present in which wheat varieties, and to try to bring resistance genes into new varieties being developed. “In the future it may mean that varietal specific recommendations for fungicides could be made for stripe rust,” Kutcher says. “For now, seed guides provide the best information on whether a variety has resistance or is susceptible to stripe rust. For varieties resistant or moderately resistant, then avoiding unnecessary fungicide applications can help reduce the potential risk of fungicide insensitivity. For varieties rated moderately susceptible and susceptible and in fields where stripe rust is developing, then a fungicide application will likely be necessary. Growers should continue to carefully scout and monitor their fields each season, particularly when weather conditions are right for disease infection, and select the most resistant varieties available each year.”