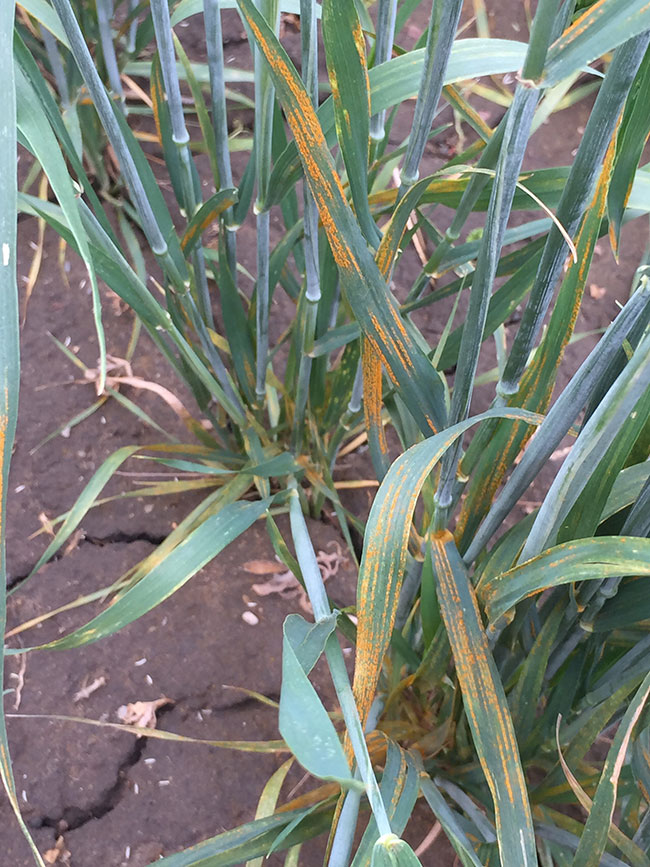 Alberta is a Canadian hotspot for stripe rust, a disease that can cause devastating yield losses in susceptible wheat varieties under cool, moist conditions. And the pathogen is notorious for its ability to quickly defeat resistance genes. So Alberta wheat breeders such as Dean Spaner and Harpinder Randhawa and crop pathologists like Reem Aboukhaddour are making sure the latest varieties can withstand Alberta’s current stripe rust races.

“Harpinder’s program and our program – the two spring wheat breeding programs in Alberta – have often worked together over the years,” Spaner notes. “That includes collaboration on resistance to stripe rust, one of our biggest wheat diseases in Alberta.”

Alberta has had multiple stripe rust epidemics over the years, especially in the past two decades, and stripe rust resistance is a priority for both programs.

Knowing the enemy
Stripe rust, also called yellow rust, is caused by the fungal pathogen Puccinia striiformis. It produces yellowish orange pustules on the leaves of wheat and some other grasses. The pustules occur in stripes parallel to the leaf veins. Each pustule contains thousands of spores that can be carried by the wind for long distances and stay viable to cause new infections.

“Stripe rust takes away green matter, and if it starts taking away the flag leaf of any grain crop it can diminish yield quite heavily,” Spaner says. “In severe infestations, you can have 50 per cent yield loss.”

The pathogen requires a living host to survive, so conditions across much of the Canadian Prairies are not usually suitable for the fungus to overwinter. For the most part, the spores are blown into Canada from the United States each year.

Aboukhaddour, a research scientist at AAFC-Lethbridge, explains that there are two wind pathways for the spread of stripe rust into Canada. Most spores arriving in Alberta are thought to come from the Pacific Northwest (PNW) states of Washington, Idaho and Oregon, a region that usually has favourable conditions for year-round survival of stripe rust. From there, the spores are blown into southern British Columbia and the Lethbridge area, and then into western Saskatchewan, central Alberta and sometimes northern Alberta.

In the other rust pathway, the spores are carried northward from Mexico and Texas through the central and eastern U.S. and into the eastern Prairies and Eastern Canada.

“In southern Alberta, the wind-blown spores shower down on our wheat crops with the rain. If the PNW has early season infection and southern Alberta has an early, wet, cool spring, the disease can quickly take hold in our winter wheat crops and spread from there into our spring wheats,” Aboukhaddour says. That scenario can lead to serious stripe rust epidemics, as the pathogen reproduces asexually over and over again during the growing season.

Stripe rust may also overwinter in Alberta. “The pathogen is able to overwinter in southern and central Alberta as a dormant fungus inside green tissue of winter wheat, volunteer wheat or wild grasses. However, it needs an insulating blanket of snow to allow it to survive when temperatures fall below about -5 C,” she says. When it overwinters, the disease can get an early start in the spring, increasing the risk for serious impacts.

Aboukhaddour is one of the pathologists providing the breeders with the latest information on stripe rust. As part of that work, her research group monitors the disease’s incidence and severity in annual surveys in winter wheat and spring wheat fields in southern Alberta. Her colleagues at Alberta Agriculture and Forestry, the University of Alberta and AAFC in Brooks, Lacombe, Edmonton and Beaverlodge conduct the surveys in south-central, central and northern Alberta.

Aboukhaddour notes that, although stripe rust was detected in the U.S. and Canada in the early 1900s, it only started to become economically important in the U.S. in the 1950s and 1960s. In Canada, the disease first became a serious concern in southern Alberta’s irrigated soft white wheat crops in the 1980s and in central Alberta in the 1990s.

Then in 2000, a new stripe rust lineage, which evolved either in East Africa or the Middle East, started replacing the older races in North America. This new group of races has been a game changer, ramping up the disease’s ability to impact wheat crops.

“These new races can cause infection at higher temperatures, which has enabled the pathogen to expand its geographic range into warmer regions,” Aboukhaddour explains. “Not only that, the new races have a wider spectrum of virulence, so they can defeat more resistance genes.”

She recently led a study to evaluate 140 Canadian stripe rust isolates collected from 1984 to 2017 against 18 stripe rust resistance genes. “Our evaluation showed the pathogen has increased in its virulence. Most of the isolates collected before 2000 were able to defeat no more than four resistance genes. Most of them since 2010 were able to defeat at least seven of the 18 genes.”

The recent increases in virulence are likely due in part to the incursion of new races around 2000 and the increased deployment of wheat varieties with stripe rust resistance genes. Deploying resistance genes puts selection pressure on the pathogen towards races that are able to overcome those genes. 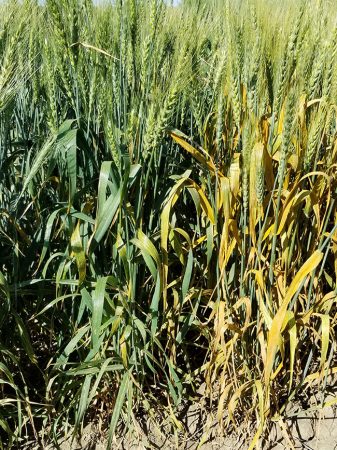 The stripe rust nursery in Lethbridge has conditions that really favour the disease. Photo courtesy of Harpinder Randhawa.

Checking for changing virulence
To monitor which resistance genes are breaking down and which are still effective, Aboukhaddour and other rust pathologists are using “trap nurseries” planted at various locations in Alberta, Saskatchewan and Manitoba each year.

These trap nurseries are composed of a set of wheat lines that are genetically the same except for their stripe rust resistance gene. She says, “One line is very susceptible to stripe rust, and each of the other lines has one resistance gene. We monitor these differential lines to see which become infected so we know which resistance genes have been defeated in each region.”

In 2020, Aboukhaddour also sent the trap nurseries to some colleagues in Manitoba, Ontario and Quebec. She hopes to expand the use of this tool to more Canadian locations in 2021.

In a related project, she is working on a way to make these trap nurseries more meaningful to Canadian wheat growers and breeders. “The differential lines were developed by Australian researchers, so they use an Australian wheat variety called Avocet. The Avocet lines are very useful for research purposes to communicate globally about the genes and races; it is like a coded language for rust pathologists. But our Canadian wheat varieties are different from Australian varieties,” she explains.

“Our current Canadian cultivars share a lot of the genetic background found in a few of the progenitor lines, like Marquis and Thatcher, from when the settlers started to grow wheat.” So, Aboukhaddour is planning to screen a set of Canadian wheat varieties from the 1870s to the present day for resistance to different stripe rust races. Her goal is to expand the trap nursery lines to include some key Canadian varieties.

Preparing the arsenal
In their fight against stripe rust, Spaner and Randhawa focus on creating durable resistance against the prevalent and emerging stripe rust races in Alberta.

As part of that work, they evaluate all their breeding lines in their stripe rust disease nurseries and discard any susceptible lines.

Randhawa’s program has a stripe rust nursery at Lethbridge, which is managed by Aboukhaddour. “We get a very good stripe rust epidemic in our Lethbridge nursery every year,” Randhawa says. “We have irrigation and perfect weather conditions for the disease: cooler nights for infection and then relatively warm days and lots of dew. Lethbridge is also a good place to look for new races coming into the region, so we can see which resistance genes are still holding up and which ones are losing the battle.”

Both breeders also screen their lines at their shared stripe rust nursery in Creston, B.C., because new races coming from the PNW reach B.C. first.

Spaner’s program has a nursery in Edmonton. He notes, “When I started my breeding program, we didn’t reliably have stripe rust here in Edmonton, so we did our stripe rust screening in Creston. However, stripe rust has now become a major disease in central Alberta; if we plant some susceptible wheat lines around our field in Edmonton, we get stripe rust.”

Another key part of “preparing their arsenal” is the work of Randhawa’s group to identify new resistance genes and develop molecular markers for those genes. “Once we screen the different germplasm lines at our nurseries and we are sure they have very good, durable resistance, then we try to identify the genetic control of that resistance,” he explains.

Both programs use pyramiding to increase the durability of the stripe rust resistance in their varieties. “It’s like constantly fighting in a battleground where if one fighter dies, a second one is right behind to continue the fight,” Randhawa says.

Firing a barrage of new varieties
All this work produces an ongoing benefit for Alberta spring wheat growers: a steady stream of stripe rust-resistant varieties.

Similarly, Randhawa’s program has been releasing new CWSWS varieties every few years – most recently AAC Paramount and AAC Indus, and a general purpose variety called AAC Awesome – which all have very good stripe rust resistance. And all his recent CPS varieties have very good resistance, including AAC Crossfield, AAC Entice, AAC Castle, HY2074 (licensed but not yet named), and HY2090 (supported for registration in 2021).

“Breeding for stripe rust resistance is a needed and long-term investment into the future,” Spaner says. “As soon as a new variety is out, the pathogen starts to evolve to defeat its resistance genes, so we have to work at it non-stop. Growers can spray a fungicide if their crop loses its resistance, but the most economical and environmentally friendly approach is for growers to have resistant cultivars.”

Over the years, Randhawa’s and Spaner’s breeding programs and Aboukhaddour’s pathology program have been supported by producer and government funding including the former Alberta Crop Industry Development Fund, Western Grains Research Foundation, Natural Sciences and Engineering Research Council of Canada, and the Alberta Wheat Commission and Saskatchewan Wheat Development Commission, through the Canadian Wheat Research Coalition.