Research looks at variety performance based on input levels. 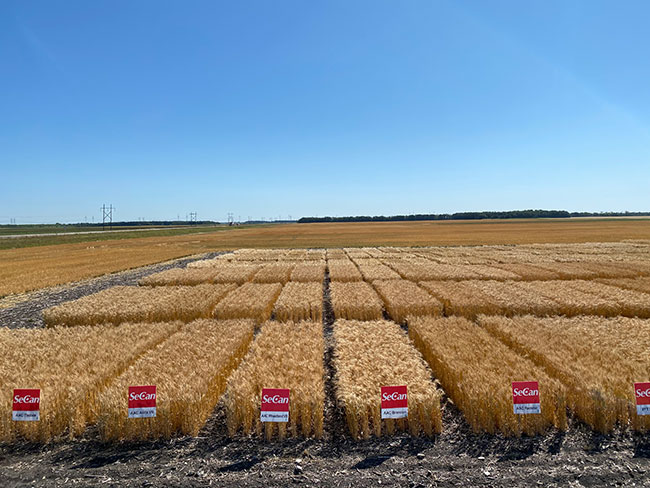 Do some wheat varieties perform better with high or low agronomic input levels?  That’s the question that Bradley Pinkerton, Manitoba marketing rep with SeCan, set out to answer in 2018.

“I go to a lot of tradeshows and talk to a lot of farmers throughout the year, and I’m always getting questions about which wheat varieties perform better under different management systems,” Pinkerton says. “Which variety would be best under high input management, and will the same variety be best under low management? Those are the kind of questions that I always get.”

To answer those questions, Pinkerton conducted research at five sites in Manitoba (Elm Creek, Fort Whyte, Warren, Grosse Isle, Minto and Carberry) and two sites in Saskatchewan (Redvers and Ridgedale) over three years from 2018 through 2020.

Two input levels were compared. The low input treatment targeted 60 bushels per acre with the fertility package, used no seed treatment, a low seeding rate of 19 seeds per square foot, and a leaf fungicide only if necessary.

The high input used a fertility target of 100 bushels per acre, used the best seed treatment available, a high seeding rate of 28 seeds per square foot, applied Manipulator plant growth regulator (PGR), and applications of a fungicide at the leaf stage to target leaf diseases and at the heading stage to target Fusarium head blight. 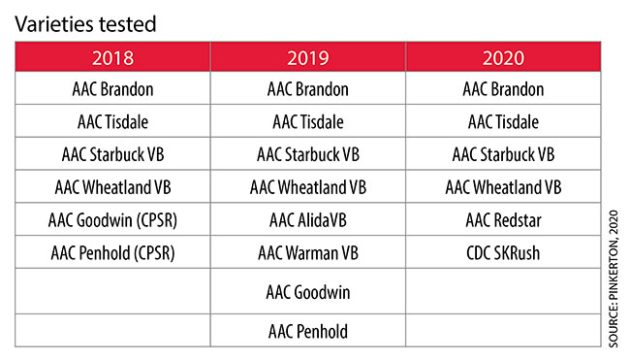 Pinkerton initially included two Canada Prairie Spring Red wheat varieties, AAC Goodwin and AAC Penhold, but dropped them in 2020 because the popularity of this wheat class was declining because of lower returns. The other varieties were in the Canada Western Red Spring (CWRS) wheat class. Not including the CPS varieties, AAC Tisdale had the highest yield gain in the high input treatment, as compared to the low input treatment in 2018 (more than nine bushels per acre) and 2019 (6.5 bu/ac). CDC SKRush had the highest yield gain in 2020 at around nine bu/ac.

“AAC Tisdale usually showed the highest yield response to increased inputs, but usually had lower yield. So just because a variety responds to an input, doesn’t mean it will be the most profitable,” Pinkerton says. 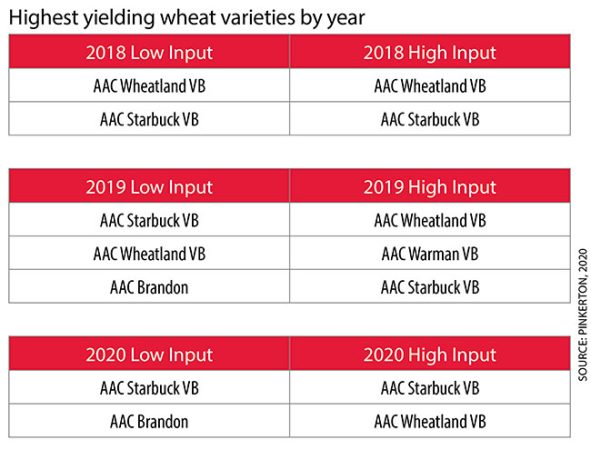 A few challenges were encountered in the research. Not all management steps were taken at every location, partially due to logistics or timing. Two of the years were very dry, resulting in yields as low as 40 bushels per acre at some locations. The dry conditions also meant much higher protein than normal, low disease pressure and minimal lodging.

“Because of the dry conditions, we didn’t see any benefit to fungicide applications for leaf disease or Fusarium head blight, or a benefit to the PGRs,” Pinkerton says. “The economic return wasn’t there either. With an average yield increase of six bushels per acre, the high-input treatments easily cost an extra 80 dollars an acre. It just wouldn’t pay on a 40-bushel wheat crop.”