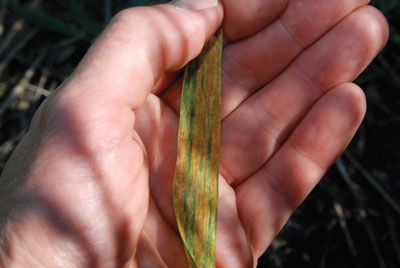 Stripe rust may have overwintered in 2010-11. The final disease surveys aren’t in yet

The final disease surveys aren’t in yet, but 2011 will go down as one of the more infectious years for stripe rust in wheat caused by the fungus Puccinia striiformis. Mutating genes, and cool, wet growing conditions combined with an abnormal overwintering of the pathogen to create what some plant pathologists called an epidemic in 2011.

“We saw an epidemic in 2006, and I would say we had one in 2011 in southern Alberta,” says Denis Gaudet, an Agriculture and Agri-Food Canada plant pathologist at Lethbridge. “I think this is an emerging plant disease. It has been on the move for the last 10 to 20 years.”

Stripe leaf rust usually overwinters on winter wheat in Washington, Idaho and Oregon, but the big news for 2011 was that the pathogen overwintered in southern Alberta, and most likely in Saskatchewan as well. Gaudet explains that the deep snow cover during the winter of 2010/11 insulated the pathogen, allowing it to overwinter on winter wheat, and then move to spring wheat much earlier than normal. Typically, the pathogen arrives on wind currents from the United States, resulting in later infections and less damage to the winter and spring wheat.

In Saskatchewan, provincial plant pathologist Faye Dokken-Bouchard says that stripe rust probably overwintered there as well, with reports coming in across the province earlier than normal.

“I suspect there is a pretty good possibility that the pathogen overwintered in Saskatchewan as well. We saw it on winter wheat first about the same time as southern Alberta, and then shortly after on spring wheat,” explains Dokken-Bouchard.

By mid-July, stripe rust was also showing up in winter wheat plots at the University of Manitoba research farm at Carman. The stripe rust that arrives in Manitoba usually comes from southern US states such as Louisiana and Texas.

Research in central Alberta has shown that yield loss in susceptible varieties of spring wheat can be 45 percent, and at Lethbridge, yield loss was observed up to 75 percent. The stripe rust fungus can cover the entire leaf, affecting photosynthesis and increasing moisture loss.

Stripe rust has more than 109 known races, and Gaudet says that means the pathogen can quickly overcome resistance. In winter wheat, Gaudet explains that AC Radiant carries the Yr10 gene for resistance, but that resistance was overcome in 2010 by a new race of the stripe rust pathogen. McClintock is also rated as Good. “If you had severe stripe rust in AC Radiant, then the resistance has broken down,” says Gaudet.

Gaudet says that in spring wheat, the resistance comes from “adult plant resistant genes” and is more stable than a race-specific gene such as the Yr10 gene. In spring wheat, many plant breeders are using the Lr34/Yr18 gene. “The adult plant resistant gene means the plant isn’t resistant at the seedling stage, but it becomes resistant by the time it reaches the tiller and boot stages. With these genes, you may see rust on seedlings, but with yield mainly coming from the flag, and penultimate leaves in the adult stage, there generally isn’t an impact on yield.”

A well-timed fungicide spray just before the flag leaf emergence can also help prevent disease development and yield loss in a susceptible variety. With adult plant resistance, there may be some stripe rust symptoms in the field in the seedling stages, but plants will develop resistance in the adult stages, so it is not necessary to spray even if the producer sees some stripe rust in the seedling stages says Gaudet.

“However, if stripe rust is occurring in the field and the farmer has seeded a susceptible variety, it may be efficacious to apply a protective fungicide treatment. That is why it is so important that farmers monitor their fields for all diseases (and insects) to ensure that effective and efficacious measures are taken against developing problems.”

With the lack of information on economic thresholds in Western Canada, research from Australian shows that fungicide application should be done before stripe rust reaches five percent of leaf area on the flag leaf. Above this infection level, stripe rust becomes difficult to control. The infection level also has to be balanced with environmental conditions at the time.

Stripe rust prefers cool, wet conditions with temperatures between 10 to 15 degrees C, at which disease development is most rapid. It is important that producers monitor their fields for crop pests, including diseases, at weekly intervals in order to make effective decisions on control measures such as fungicide sprays. Many of the fungicides registered for stripe leaf rust in wheat also control other leaf diseases.

Breaking the green bridge of material between spring crops and winter crops is also important. The late spring wheat harvest of 2010 likely overlapped the establishment of winter wheat during the fall of 2010, resulting in the fungus jumping from green spring wheat to the seedling winter wheat – carrying on the disease cycle. Controlling volunteer cereals and grass by spraying or cultivation in the fall will also help to limit the green bridge.