Six years in, a 12-row strip till machine has more than proven itself to one family in Manitoba. 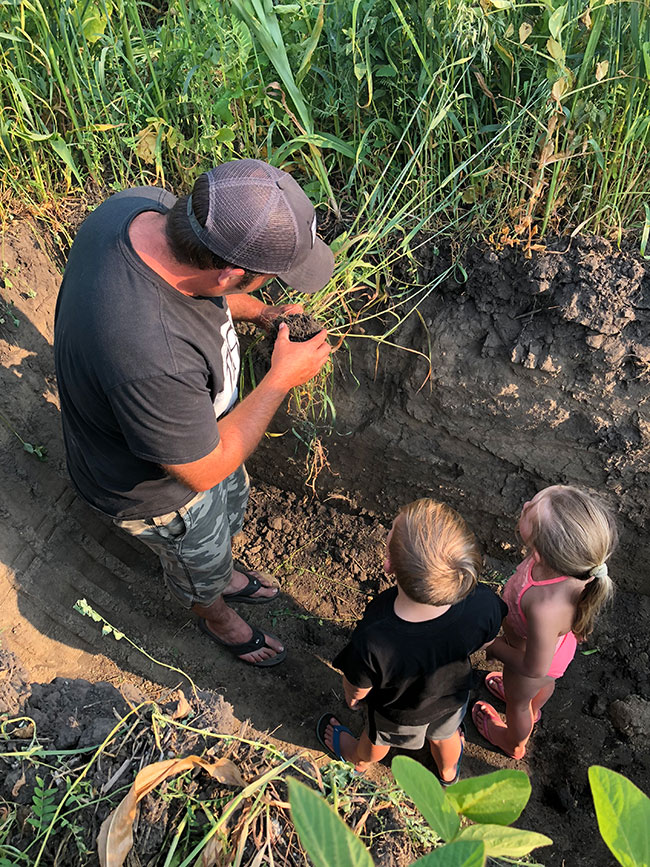 Since going to strip till, Toews has noticed the soil changing and evolving in many ways. Photo courtesy of Edna Toews.

Strip till is the midpoint between no-till and conventional tillage. It produces black, intensely tilled, narrow bands for planting row crops, while leaving undisturbed soil and crop residue between the strips.

Strip tillage came into widespread practice in the United States for row crop growers in the 1990s.

In 2013, Bernie Toews and his sons in MacGregor, Man., committed to getting their own strip till machine for planting. Half the farm was in corn production, and they were keen about other row crops, including soybeans.

Dean, Devin and Darren, sons of Bernie and Edna Toews, looked for a strip till machine in Western Canada. In Nebraska, they found what they wanted. They purchased a used 30-foot, 12-row Orthman 1tRipr strip till machine and hauled it home.

Now, a few more strip till machines are in Manitoba. A neighbour has two, purchased from the local John Deere dealership after it obtained a strip till franchise – a statement to how the popularity of strip till is growing in the region.

“The Toews family are the most experienced strip tillers that I know in Manitoba. We learned a lot from Dean and his brothers,” Yvonne Lawley, assistant professor of plant science at the University of Manitoba, says.

“Half of our acres are in corn every year. We also grow edible beans, soybeans, sunflowers, wheat and some fall rye,” Dean says.

The light soils in this area make it ideal for potatoes, but also are prone to wind erosion, especially in row crop production. The family struggled to get nutrients in the ground for corn while keeping crop residue on the surface.

“If the surface was bare, the land would blow. Any time things dried out, if there was little or no residue, the soil would blow in the wind,” Dean recalls.

Using Roundup Ready corn and soybean options helped, in one sense. They could control weeds without tillage. Then they stopped doing row-crop tillage altogether.

“We’d plant and spray a couple of times,” he says. “But, we didn’t like having just Roundup Ready crops. We wanted wheat back in the rotation.”

They tried another idea, on land rented from potato growers. When the potatoes were off in late fall, they seeded it to a rye cover crop. That kept the soil in place for a few months and grew some root mass to hold the soil. In spring, the air seeder could band corn nutrients below the rye.

“But, the rye started using the nutrients we were putting in the ground for the corn, and that was affecting our yields of corn,” he says.

That was when they got interested in strip till technology, in principle, south of the border.

“Strip till was attractive because it would create a black strip and a barrier. We’d be able to till up the cover crop and give the corn seed a head start. It would take out the rye competition, next to the corn, and buy us a little more time,” Dean says.

“Before strip till, we sprayed out the cover crop before it could remove the corn nutrients – but that left soil that still could blow if the corn wasn’t advanced enough. Strip till lets us leave it longer and spray it out later. That also seems to minimize weeds throughout the growing season. 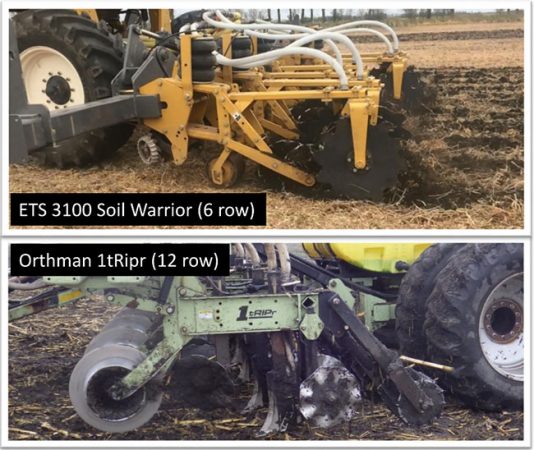 Examples of strip till equipment. Up until recently it was hard to access equipment in Manitoba, but it is slowly becoming more accessible. Photo courtesy of Yvonne Lawley.

The learning curve that first spring was brutal difficult, and the first time the Toews’ put it into the ground behind their 280-horsepower tractor, they knew it needed more horsepower. It was doing deep tillage on 12 eight-inch strips, cutting eight to ten inches deep and breaking through a layer of hardpan.

“That first tractor was on its knees and spinning at four miles per hour. It needed way more power. We ended up renting a 530-hp Quadtrack tractor for it, then later bought the tractor,” Dean says. “Now, we have it set on eight inches deep and 400- to 450-horsepower gets through most of the hardpan,”

Tools on the Orthman include a 24-inch vertical disc that cuts residue, followed by trash whippers, then a shank with two discs beside it to hold dirt in the eight-inch strip, followed by a rolling basket to that breaks up clumps and creates a berm that warms the soil by catching more sun.

“It also brought up remnants of forgotten yard sites. We ended up cleaning old yard sites a little more than we cared to,” he recalls. “One time, we pulled up an old metal steering wheel. There was a pitchfork, too.”

The brothers were using a 24-row planter, and they had a wet spring. Their Orthman had arrived with a liquid fertilizer tank and kit. To that, they added an air cart with dry products.

“At first, the planter was always waiting for the strip till to be done,” Dean laughs. “It’s easier now. We’ve gotten faster with it. You can do six or seven miles per hour. The last couple years have been drier, too. As soon as the frost is down, we start strip tilling to get a couple weeks head start on the planter.”

The exception to that solution showed up soon and hasn’t yet been solved.

“We don’t use it on a couple fields in the hills with really curvy headlands,” Dean says. “It’s too much challenge for the planter to stay in those curving strips. You end up off-row more than on-row.”

Most fields are square and they do the headlands with strip till. One half-section has too many stones. Doing strip till there pulls up too many stones and has damaged the unit. Bending shanks and sinking tires were two more learning curves that came their way, as they gained strip tillage experience.

“The factory shanks three inches deep by an inch wide, with replaceable tips and a sheer-bolt trip system,” Dean says. “We upgraded to four-inch shanks, then two years ago we made a hydraulic breakaway system. Now, if a shank hits something too hard, it dumps the oil out of that cylinder and resets on its own. That’s been a big improvement.”

Deep footprints on their soft sandy soils told them they needed to lighten the load. For better flotation, the brothers added a set of wheels to the Orthman and put bigger tires on the air cart. The system has a much lighter footprint now.

Payback on the investment in strip till has come in multiple ways, according to Toews. In 2013, Dean did side-by-side trials with corn comparing fertilizer treatments by strip till, by broadcasting and by tillage with a discer. Results favoured the strip till by 14 bushels per acre.

The University of Manitoba plant science department and the Manitoba Corn Growers Association (MCGA), soon had word that a strip till machine was on the MacGregor area farm. Dean Toews is also one of the MCGA directors. As a result, years of official performance trials soon were underway.

For three years, Patrick Walther, a student doing his master’s thesis with Lawley on corn residue management compared strip till with other tillage practices and the response of soybeans following corn. The four treatments included strip till, vertical till with high disturbance (high-speed disc), vertical till low disturbance (residue left on the surface), and a double disc.

Dean says, “He found no difference in soybean yield from any of the tillage practices, however the strip till uses less fuel and less time. The other systems need more than one tillage pass and use a little more fuel per acre. Strip till cost us about $19 per acre less than the other systems.”

“For two years, we have had no yield differences between low and high nitrogen rates on corn,” Dean says. “Using less fertilizer and getting the same yield has really piqued our interest. If we can keep moving forward with that, it will make a big difference on costs. We are seeing a one-bushel return with 0.6-pound rate of nitrogen, where normal is one pound per bushel. If we can continue growing those extra 10 or 14 bushels, with less nitrogen and just one pass for tillage with fertilizer, the numbers will really start adding up.”

Edible bean production and strip till held one more surprise for the three brothers. Twice, Dean says, they have planted edible beans in corn residue after making one strip-till pass between the old corn rows. They plant the beans in the strip and roll the ground. That replaces doing three passes (including strip till) that turned the roots and residue into the ground to make it blacker for beans.

“The harvesting has been better on those acres, and the yields have been equal or better – with less tillage,” Dean says.

And that points him to one more observation.

“We want to leave corn roots in the ground. Since going to strip till, we are seeing earthworm activity like we’ve never seen before. With those roots staying in the ground, we think an ecology is developing in the soil. And, maybe that’s why we’re not needing the same amount of nitrogen anymore. A lot of things are happening. It seems like the soil keeps getting better and better.”