Now is the time to sample for soybean cyst nematode populations. 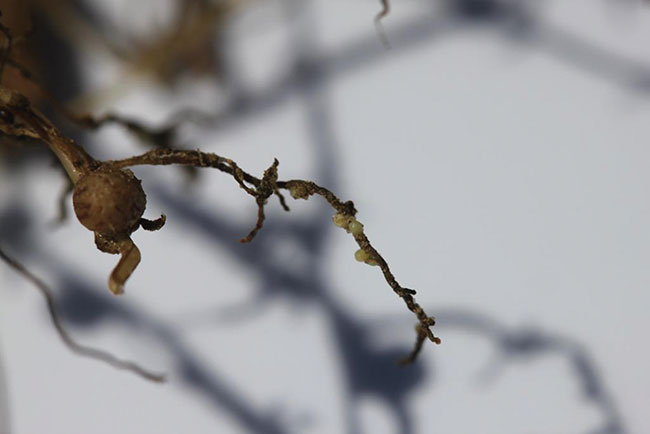 : The female cysts carry up to 250 eggs and can persist up to 12 years, waiting for vulnerable roots. Photos courtesy of Top Crop Manager.

Post-harvest, for some, is an urgent and important time for determining soybean cyst nematode (SCN) populations. Albert Tenuta, field crop pathologist with Ontario’s Ministry of Agriculture, Food and Rural Affairs (OMAFRA), doesn’t mince words on this subject. The situation in Ontario has seriously changed. Cautiously, he adds, there is also potentially great news on the horizon.

“It’s imperative that producers soil sample, find out if they have SCN, find out the population numbers, and start managing them,” Tenuta says. “The biggest new development is the SCN population increases on the 88788 source of resistance. That’s a big issue. In areas of the U.S. Midwest, 80 to 90 per cent of fields have nematode that are adapted to 88788, and they’re now the majority in many of those fields. As a result, growers there are seeing a lot more yield loss.”

Ontario scientists have recently learned that 30 to 40 per cent of fields already have a resistant nematode in the field population, but the numbers still are very low. The good news has two prongs. One, wise action now can help Ontario avoid the threat on the doorstep. We know more about the nematode today than 20 years ago, have new tools and an organized effort to confront it, head-on. Secondly, genetic science may help in the longer term. Soybean breeders have a replacement gene that can hold nematodes at bay, with one Ontario-developed line developed close to commercial release. And, gene editing, the newest tool in the box, may come to the aid of the industry.

Canada’s first soybean cyst nematode was identified in Ontario in 1988. By that time, it probably had been present for 20 years or more, Tenuta says. “It does its business below ground and goes along undiagnosed until it’s very obvious due to above-ground symptoms. Then you have probably 25 per cent yield loss, or more,” he says.

“It does its business below ground and goes along undiagnosed until it’s very obvious due to above-ground symptoms. Then you have probably 25 per cent yield loss, or more,” he says.

It happened in the same area that was first hit in 1988 – from Guelph over to Windsor. Growers weren’t aware that SCN was even in some of those fields in 2019, until they called for advice and went out to look at the roots, Tenuta says.

Varieties with the ‘SCN-resistant’ label have been highly successful since the mid-1990s. “They’re proven successful, almost too successful. Now we’re starting to see some of that resistance breaking down,” he says. Ninety-five percent of genetic resistance to SCN attack comes from a wild soybean (Glycine soja) known as plant introduction (PI) 88788. “It is the cornerstone of nearly all SCN-resistant varieties, public or private, in North America,” Tenuta continues. About five per cent of commercial varieties use resistance from a second source (PI 548402), known as Peking. The problem, according to Tenuta, is that “there’s no such thing as a totally immune variety.” SCN enters the plant by attaching egg-carrying cysts to the fine root hairs of soybeans and some other species.

On resistant varieties, the nematode’s ability to reproduce is much lower, by a factor of 90 per cent or more. However, it doesn’t take many survivors to keep the nematode population at a low level and ready to increase. In the growing season, a new generation of nematodes can emerge once a month. The female cysts carry up to 250 eggs and can persist up to 12 years, waiting for vulnerable roots. Compared to susceptible soybeans, the roots of a 95 per cent resistant variety still can be invaded. Some SCN reproduction is happening on the PI 88788 and on the Peking-based varieties. That’s the problem; under selection pressure, the population is able to shift.

The female cysts carry up to 250 eggs and can persist up to 12 years, waiting for vulnerable roots. Compared to susceptible soybeans, the roots of a 95 per cent resistant variety still can be invaded.

“Over time, the effectiveness of that source of resistance starts to decline. Then you see more visual symptoms and more yield loss,” Tenuta shares. “Plants are only a foot to 18 inches tall, they’re not filling the rows, and yields are down to 17 to 25 bushels. Yield losses are 50 per cent or greater. That’s because the SCN population in those fields has shifted.”

Today, soybean growers in Eastern Canada can assume they have some level of SCN in every field. To manage it, Tenuta explains, they need to measure the population at least every four to six years to know what it is and how it is changing. From that base, they can rotate soybean varieties and rotate crops to keep the SCN under control. Seed treatments are a third line of attack.

In a lab, eggs can be counted. Lab equipment is needed to detect the eggs, which are equivalent to the size of the period at the end of this sentence. If there are 1,000 to 2,000 eggs in a 100-gram soil sample, the population is starting to build. If the sample comes back negative, it doesn’t mean the field doesn’t have SCN – it just means the number is below the detection level.

“Numbers below 2,000 are easily manageable with the resistant varieties and crop rotation. A three- to four-crop rotation is better than a corn-soybean rotation. The more diversity, the better,” he says. Above 2,000 to 5,000 eggs, you start to see symptoms, depending on the year and growing conditions. The more stress, the more likely you are to see symptoms and yield loss.

Yield loss can be a symptom of an SCN problem, and it often is overlooked, Tenuta says. Long term soybean yield averages should be increasing because the genetics are getting better and the equipment for managing the crop is getting better. If you’re not seeing the average increase, or if you actually are seeing a decline in your averages, that needs to be addressed. Often, it’s a good sign of the SCN problem.

Most soil labs doing fertility work will do the SCN count, if you ask. Cost range is approximately $25 to $35 per sample. The service has been available for decades, but Tenuta says it is under-utilized: “Every field in the province should be sampled for SCN.”

The service has been available for decades, but Tenuta says it is under-utilized: “Every field in the province should be sampled for SCN.”

Peak population time is in the fall after harvest. It’s the best time to take a soil sample, allowing time to make plans and select a new resistant variety. If the soil sample analysis indicates you need to reduce the SCN population, think about taking more samples to determine the variability. You may be able to divide the field into some SCN management zones with different varieties or other control strategies. 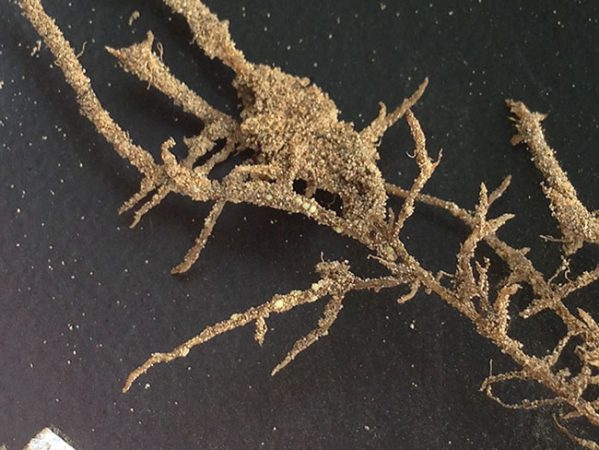 Above 2,000 to 5,000 eggs, you start to see SCN symptoms, depending on the year and the growing conditions. Photos courtesy of Top Crop Manager.

Public and private breeders have made crosses, scrambled genetics, and then made selections leading to new varieties with improved characteristics including SCN resistance. Breeders know they may all get the same “SCN Resistant” label on the shelf, but each cross is slightly different in its resistance. Sharp management can use that difference – by selecting similar varieties from different crosses or breeding programs – to keep pressure on the entire nematode population without selecting favorites.

A diverse group of university researchers, extension specialists and ag companies in the U.S. and Canada now share their expertise in a coordinated way through thescncoalition.org. The site includes a list of labs, research summaries, tools, news, and answers to common questions.

Along with colleagues in the U.S., Tenuta is researching cover crops for managing SCN. “Roots of canola, brassica, green manures, ryegrass and oats can allow nematodes to break dormancy without allowing them to reproduce. That can lower the population. On the other hand, legume cover crops like clover or peas act as hosts for SCN. There are benefits from cover crops for soil tilth and soil health, but we have to be careful. Risks could be associated with cover crops, too, and in many cases, we need a lot more information,” he says.

One exciting prospect is the possible introduction of Ontario’s first line of soybeans with a third form of SCN resistance. Food-grade soybean breeder and geneticist Milad Eskandari has been leading the traditional breeding program at the University of Guelph Ridgetown campus since 2013. He is the first public soybean breeder in Canada to use PI 437584 or Hartwig genetics, as well as Peking and PI 88788 sources.

Until now, Hartwig has been on the sidelines in breeding programs. The original Hartwig genetics has problems, especially in yield and bean size. Eskandari has patiently made the crosses, done the sorting, and now after five years, believes he has a cross with commercial potential for food-grade soybeans. “Hartwig is the most reliable and best source of SCN resistance at this time. It is resistant to almost all the known types of SCN,” Eskandari explains.

SeCan is the main sponsor and has put one Hartwig-based line into four official performance variety trials in Ontario. Yield results were expected to be ready in November for the sponsor. If a Hartwig-type variety is approved by SeCan, developing the seed supply for commercial grower seed would take at least two growing seasons. If neither is released, more are in the pipeline now that program is underway.

“Now that we’re started, every single year after 2020 we will be having new Hartwig cultivars,” Eskandari says. “I am excited. Our farmers are dealing with a problem that will stay with them. It takes time and it’s not easy to develop a source of resistance.” For now, Tenuta suggests, do the soil samples as soon as possible and then check out what’s new on The SCN Coalition website and watch for new SCN-resistant varieties from Ontario breeders.