Features Agronomy Tillage
A look at strip till

Combining the benefits of both conventional and zero tillage, strip tillage involves only tilling strips of about 10 inches in every 30 inches of field. It’s become a popular option for corn and soybean crops in traditional U.S. Midwestern growing areas and is being researched in Western Canada. 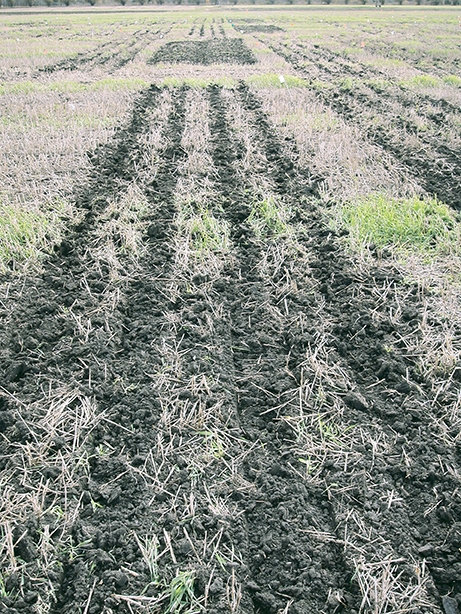 Jim Patton Combining the benefits of both conventional and zero tillage

The practice opens ready-to-seed strips in fields that are covered with heavy residue, putting the fertilizer into the soil where it’s most needed. It also warms the soil in the strips more than soil that’s not tilled, but the field also remains protected from erosion and moisture loss by the remaining residue.

Jim Patton, the president of the Innovative Farmers Association of Ontario and a cash crop farmer northwest of Alliston, Ont., tried strip tillage in 2000 after hearing that Greg Stewart, a corn specialist at the Ontario Ministry of Agriculture and Food, was doing a study on it. Patton had some information from equipment dealers and decided to give it a try. “It became a standard part of our program and we would never change that. It works really well.”
For Patton, strip tillage reduces costs relating to labour, equipment wear and fuel, in addition to bringing up the average corn yield among all his fields, where soil type variance is a factor.

“It’s also environmentally sound in my opinion,” he says, “as you’re only working that strip and you’re putting fertilizer
exactly where you need it.”

The first year, Patton tried strip tillage in the fall, but he found the berms sank too much and emergence wasn’t good enough as the soil took too long to warm up. “We started doing it in the spring after wheat and before corn. The soil warms up more and you can put down all our nutrient requirements for the season at once.”

Overall, Patton characterizes it as a technique that provides “better efficiency” from a fertilizer program. “It allows us to use 30 per cent less fertilizer to get the same yield opportunity,” he explains. “It’s really the nitrogen that you can use 30 per cent less of to get the same bushels. We do soil tests regularly and tweak the P and K.” Patton has also, over the last few years, gone to a mix that has 25 to 30 per cent slow-release ESN nitrogen, and says it’s given good results. “We also did some reduced-rate test strips one year and again this year, and our yield didn’t vary, so that tells us our fields are in good shape,” he notes.

Patton started out using a Yedder Maverick 2 strip-till implement, but he and family members did quite a bit of work to customize the mold knife and exhaust pipe, modifications that allowed it to handle 12 rows instead of six. “We also incorporated an air cart to deliver all the fertilizer into the row, not through the planter,” he says. “It’s sped it up tremendously, as you don’t have to stop and refill the planter all the time.” They now use a larger air cart with a John Deere 2510S strip-tillage air seeder, which is also used in the fall for winter wheat planting. “It’s a heavier
machine with flexible capabilities for the side hills,” Patton explains. “There are three sections totalling 30 feet, and the flexibility in the frame is great.”

Study results
About a decade ago, Stewart did a study in West-Central Ontario looking at the effectiveness of fall strip tillage and
fertilizer placement on corn in comparison to conventional and no-till systems. The conventional treatment involved moldboard plowing to a depth of six inches with two passes of spring secondary tillage, and fall fertilizer broadcast on the soil surface shortly before plowing. The fall strip-tillage treatment involved eight inches on 30-inch centres, at a depth of six to eight inches. Fertilizer was applied in the fall at a depth of six inches in the centre of the tilled strip. The last treatment was no-till with fall fertilizer broadcast on the soil surface.

On the sites where requirement for K was high, Stewart found that applying P and K fertilizers only in the fall did not maximize corn yields. “We found that placing the fall P and K in a band within the strip-tillage system didn’t remove the requirement for P and K applications through the planter in the spring,” he says, “which is what we’d hoped for.” He thinks the band was maybe too deep and/or the fertilizer application was too central for the plants to be connected to the N supply. “It’s not a great idea to put fertilizer straight down below the corn plant because they don’t go straight down,” he notes. “Using a planter to apply fertilizer would have worked better in these needy soils, which goes two inches down and two inches to the side. It’s not the amount, it’s the timing and placement.”

Strip till has its place in soils that are rich, Stewart says. “If your strip till could be spring-based and included all P and K you need for your crop, and you put it in six hours ahead of corn planter, it would work,” he notes. “It would be operationally savvy to do that ahead and planting goes much faster as well.” Some attention would need to be paid to fertilizer burn, but Stewart thinks that could be resolved.

Patton has a neighbour who strip tills in the fall, but he prefers to strip till in spring. “It depends on your soil for the most part,” he says. “We have mainly Brookston clay loam to Harriston loam with a bit of tioga sand and Tecumseth clay. The strip tillage works well for us in the spring because it warms the ground more quickly. We get a good gain in maturity and drydown on land that doesn’t do as well as other land.”

He advises anyone who wants to start strip tillage to start small, on land where you want to bring up your average corn yield. “The cost is reasonable with a six-row implement,” Patton says. “It’s one of many things you do to improve things on poor land, but it definitely takes more management. We spend a lot of time calibrating equipment. It’s not get in and go.”