Strip till offers several benefits to soybean growers on heavy residue stubble. A key benefit on sandy loam soils is leaving residue on the soil surface to protect against soil erosion by the wind – an occurrence in recent years after snow melts on tilled soils. 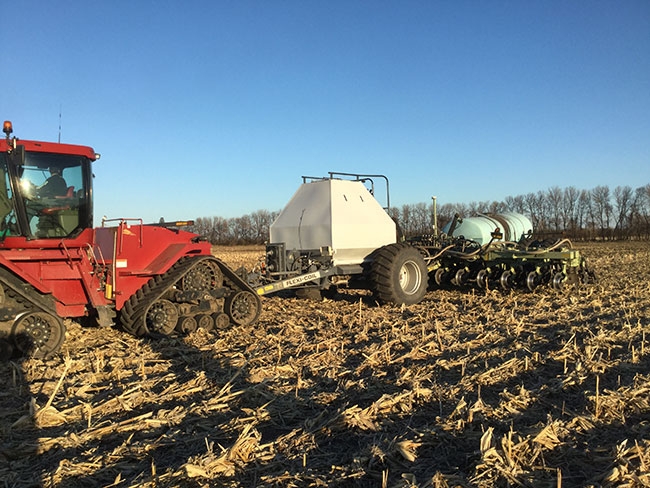 Reducing the amount of tillage passes to prepare the seedbed can also reduce input costs and save time, but questions arise regarding the impact on soil temperature, crop growth, maturity and yield. Patrick Walther, a graduate student at the University of Manitoba under the supervision of Yvonne Lawley, compared different tillage systems on corn stubble to see if strip till has a fit in Manitoba.

Walther conducted two years of research at the following sites in Manitoba: Winkler and MacGregor in 2015, and Haywood and MacGregor in 2016 on sandy loam soils. He compared double disc, high disturbance vertical tillage (six degree angle on disc), low disturbance vertical tillage (zero-degree angle on disc) and strip till implemented in the spring or fall. Soil temperature was measured at five and 30 centimetres deep, and soybean growth, maturity and yield was observed. Soybeans were planted on 30-inch row spacing using a planter with disc openers and no trash cleaners.

Walther says there may be several reasons for the difference in strip till temperatures. The first is that strip till pushes trash to the side so that the residue is not acting as an insulator. The bermed soil left by strip till has greater black soil surface area exposed than flat soil, promoting more warming and cooling. The berm is also fluffier than tilled soil, with more air pores that warm up and cool down faster.

Soybean growth
While soil temperatures are interesting, emergence, crop growth and yield pay the bills. In three out of four site years, Walther did not find any statistical difference in emergence between the tillage treatments. At the fourth site, strip till lagged behind in emergence but the final plant stand ended up being the same at 30 days after planting.

“Soybeans are good liars early in the season anyway. What is much more important is plant growth at flowering and pod stages, which is where you make the yield,” Walther says.

Statistically, strip till soybeans grew the tallest, but only two cm taller, so not agronomically very important. Pod height had highly significant differences, but again, not that agronomically important. Measured from the bottom tip of the lowest pod to the soil surface, strip till was 60 millimetres (2.4 inches) compared to 65 millimetres (2.6 inches) for double disc and high disturbance vertical till, and 69 millimetres (2.7 inches) for low disturbance vertical till. So, still achievable for floating cutterbars on a combine.

The only yield-related difference was with grain moisture. Strip till soybeans had significantly lower grain moisture content of 13.38 per cent compared to double disc at 14.29 per cent.

“The residue management treatments in this experiment were dramatically different and we were expecting large differences in yield, but what ended up happening, with no differences in yield, was unexpected,” Lawley says. “This is good news because it means there are a variety of approaches – including strip till – that will work for farmers to manage corn residue before soybeans.”

Strip till left more crop residue on the soil surface compared to vertical till high disturbance.

Strip tillage more economical
Walther partnered with Prairie Agricultural Machinery Institute (PAMI) to look at tillage costs in the different tillage systems. They identified a major advantage in strip till, which used three times less fuel compared to double disc. Strip till only required one tillage pass, either fall or spring, compared to two passes for the other high disturbance tillage systems. As an example, if you consider an average farm in Manitoba of 1,134 acres, if the whole farm were planted to corn, managing the corn residue with strip till would save a farmer up to 3.7 days compared to double disc.

“Farmers say I don’t care so much about fuel but my time is important. Eliminating one tillage pass was an additional major benefit,” Walther says.

Walther says the results of the research show that strip till on sandy soils look promising for soybean growers. A strip till system could bring major time, input and soil conservation benefits. Typically conducted in the fall, a strip till could also include phosphate (P) fertilizer applications that would allow farmers to meet the high P demands of soybeans without having to just rely on soil or starter P.

Strip-till soybeans on the U.S. Northern Great Plains
Research in Minnesota has found similar results for soil temperature, growth and yield when soybeans are grown with strip till systems. University of Minnesota research from 2010 through 2012 compared chisel plowing with spring field cultivation, disc ripping with spring field cultivation, fall strip tillage and two passes with a shallow vertical tillage implement. Yields between the tillage treatments were not statistically different.

In a separate three-year study during 2006 to 2008 in southern Minnesota, researchers compared soybean yields among chisel plowing, strip tillage and no-till for fields previously planted in strip-tilled corn. The type of tillage had no effect on the soybean yields during the three years.

A new four-year study was implemented in 2015 by North Dakota State University and University of Minnesota. This multi-state effort is in year three of a six-year field study. Four on-farm locations are under a corn-soybean rotation and rotate each year. At each location, the four tillage practices are demonstrated using full-sized equipment in plots of 40 or 66 feet wide by 1,800 feet long in a replicated design. At each site, a chisel plow, vertical tillage, strip till with shank, and strip till with coulter systems are demonstrated

During the spring of 2016, soil temperatures and water contents did not tend to differ among tillage practices except for a brief period of approximately seven to 10 days immediately following soil thaw in early March. This was primarily due to the dry spring conditions and relatively low soil water contents. These differences would likely persist for longer periods as spring precipitation increases. Soybean yields in 2015 and 2016 did not significantly differ among tillage treatments.


Related
Till or no-till after soybeans?
Soybeans: to till or not to till – revisited
A look at strip till
Strip tillage a friendly solution for Manitoba farm