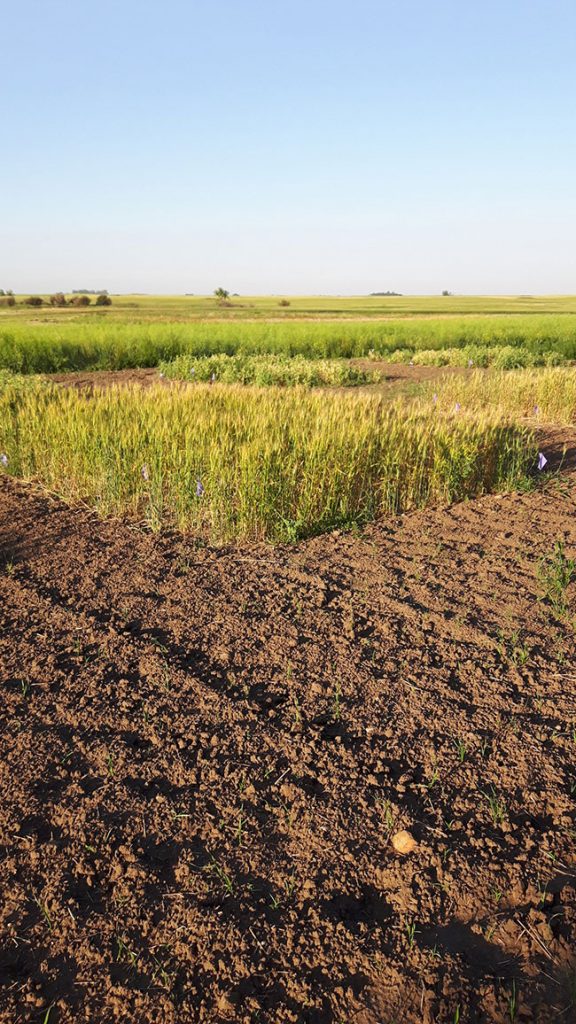 Phosphorus (P), an important nutrient to encourage early root growth and establishment in crops, has low mobility in the soil. Therefore, fertilizer P is usually applied in or near the seed row during seeding. However, seed placed rates are limited for some crops that are sensitive to injury, such as canola or peas. Researchers were interested in finding out if foliar applied P fertilizer might have potential under western Canadian field conditions.

“We wanted to evaluate whether foliar P fertilization could potentially address some of the seed-placed limitations of soil-applied P through the application of dissolved mono-potassium phosphate to crop foliage, especially to consider later season P demand,” says Jeff Schoenau, professor and professional agrologist with the department of soil science and Ministry of Agriculture Strategic Research Chair at the University of Saskatchewan. “Few recent studies have evaluated this potential under western Canadian field conditions. Masters student Stephen Froese conducted a two-year study in 2016 and 2017 to try to answer these questions.”

The two-year study included both growth chamber and field studies, which were conducted at four sites in different soil zones in Saskatchewan with contrasting soil and environmental conditions, including Mawer, Central Butte, Rosetown and Pilger areas. The soils varied in available P status and were generally considered to be potentially responsive to P fertilization. The objective was to determine the effect of combinations of seed-row applied granular mono-ammonium phosphate (MAP), and foliar applied mono-potassium phosphate solution on the crop response of canola, wheat and pea. 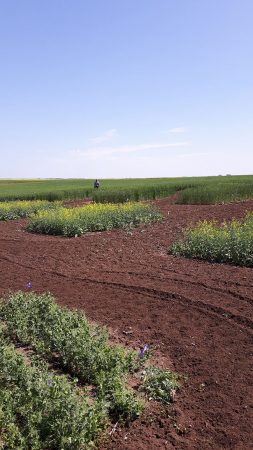 “The results showed that foliar applied P cannot entirely replace soil-applied P, as that early season P availability to the roots in the soil in the spring is important for annual crops grown on prairie soils,” Schoenau explains.

“However, there was evidence of some uptake of P through the foliage, so it might be used as a type of ‘top-up’ application, particularly for high P-demanding crops and crops that are quite sensitive to seed-placed rates of P. The results showed a limited potential for the uptake of P through the foliage. As well, as the proportion of foliar applied versus soil applied P increased, we saw a reduction in yield and P uptake.”

Overall, at all of the field sites, canola was the most responsive to the P fertilization, whether soil or foliar applied. The field sites varied with P fertility, and in the locations with quite low P, the biggest response was with canola crops. The wheat trials did show some response, but less than that observed with canola. And overall, pea showed little response to P fertilization, reflecting that pulse crops are pretty good scavengers of P from the soil.

“We also looked at the influence of foliar versus soil applied P on the phytate content of the seed for each crop,” Schoenau says. “Phytate is of interest, because it is a P-containing storage compound in seed that tends to bind with micronutrients like zinc (Zn) or iron (Fe), reducing their bioavailability to humans. However, overall foliar and soil P fertilization at the rates applied in this study had limited effect on human nutritional value of the grain as assessed through the effect on Zn, Fe and phytate concentrations in the grain.”

Evaluating methods of application for phosphorus

A second objective of the study was to evaluate the effect of method of application, either seed-row or foliar, on potential P export in snowmelt using simulated snowmelt run-off from phytotron and field soil slabs collected after harvest. Although the results showed there may be a small trend towards slightly less P removed from the soil from foliar P application, it wasn’t significant. The study did not show any significant discernible impacts of the proportion of P applied in foliar versus soil applied on the dissolved reactive inorganic P (DRP) measured in simulated snowmelt runoff from post-harvest soils.

“Our results from this study show that foliar-applied phosphate is certainly not a replacement for soil-applied P for annual crops grown on the Prairies, because they benefit from that supply of available P in the soil for uptake early in the growth cycle,” Schoenau says.

“Therefore, placement in the seed row or nearby is very important to provide plants with early access to P to stimulate early growth and development. However, in crops like canola or wheat, foliar-applied P may play a role in a top-up application if needed. Foliar P fertilization may be most suitable for crops where P demands are high and amounts applied at seeding in the seed row may be limited by seed-row safety concerns. For future studies, it would be beneficial to evaluate the effect of different forms of P fertilizer and other additives that may improve uptake through the foliage and determine the efficacy at different crop stages.”