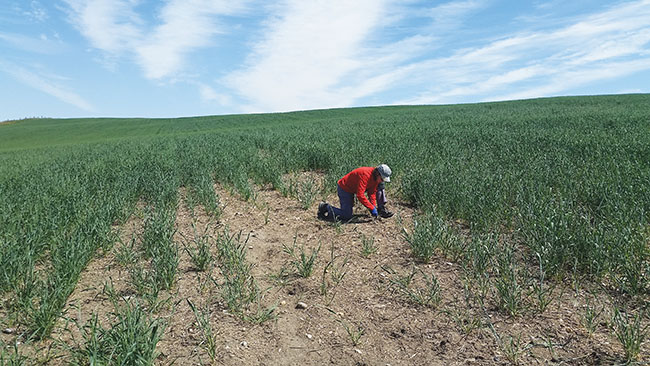 Haley Catton is researching the impact of crop rotation on wireworm species.Photo courtesy of Mariah Ediger.

Wireworms seem to be getting worse, although nobody knows for sure since population surveys have not been conducted recently. But since lindane insecticidal seed treatment was withdrawn from the market in 2004, anecdotal evidence points to an increasing problem. Some producers are very frustrated with the persistent infestations they face year after year.

“When I started working at Lethbridge in 2016, I asked funders and growers what insect pests they were concerned about or would like to see researched, and what I heard back was wireworms,” says research scientist Haley Catton, an entomologist with Agriculture and Agri-Food Canada in Lethbridge, Alta.

Catton explains that wireworms are not a worm species, but actually the larval stage of several species of click beetles. The most common species on the southern Prairies are Hypnoidus bicolor, Selatosomus aeripennis destructor, and Aeolus mellillus. Each has their own life cycle and characteristics. For example, H. bicolor and A. mellillus are mostly or all females and do not need to mate to lay eggs. Those species can fly as adults. S. a. destructor comes in both male and female forms and needs to mate, but does not fly.

Click beetles emerge from hibernation in the spring and lay eggs in preferred crops, such as grasses or cereal crops. The eggs hatch in the early to mid-summer into “neonate” wireworms, which are very small (less than four millimetres). Neonates, the term for first-year wireworm larvae, do not do much damage themselves, but they grow into larger wireworms that eventually cause damage.

The resident larvae are the most damaging stage of wireworms – they are active in the spring, when they feed on seeds and crops during establishment. Resident larvae will eventually pupate in late summer, with the adult click beetle emerging during the following spring.

In 2017, Catton started a three-year wireworm research project funded by the Alberta Wheat Commission and the Western Grains Research Foundation. The project looks at how crop rotation in the two prior years affected wireworm numbers, size and species composition. Twelve spring wheat fields were selected in each year with one of the following rotations: cereal-cereal-wheat, canola-cereal-wheat, cereal-canola-wheat, pulse-canola-wheat.

Sampling occurred at six locations per field. Each field was sampled with one underground bait trap in the spring, and two-combined soil cores of 4.3-inch (11 centimetres) diameter by four in. (10 cm) deep weekly from spring until harvest.

In the first two years of the trial (2017 and 2018), 1,072 wireworms from eight or more native species were collected, dominated by H. bicolor (58 per cent), S. a. destructor (23 per cent), and A. mellillus (nine per cent). However, the densities of wireworms were variable from field to field, with 52 per cent of wireworms collected from six out of 24 fields. Results from 2019 are still being analyzed.

“We suspect that having winter wheat in the rotation the year before spring wheat resulted in higher survival of young S. a. destructor larvae,” Catton says.

Control options
Catton says that there is still much to learn about integrated control options, such as using crop rotation as a tool to manage populations. Other agronomic practices that promote vigorous, rapid crop growth and a healthy stand establishment – shallow seeding into warm, moist soil, adequate soil fertility and high seeding rates – can also help the crop better survive wireworm feeding pressure.

“Knowing your field history is important. Look for dead patches, and if you see them in the spring, dig around to see if you can catch the wireworms in the act of feeding. Other methods of control are being investigated, but in the near future chemical control will remain the most important tool,” Catton says.

Lindane was a very effective seed treatment and killed neonate and resident larvae: research by AAFC research scientist Bob Vernon (retired) showed that 65 to 70 per cent of the resident larvae died during the growing season in wheat plantings. Lindane also killed more than 85 per cent of new neonate larvae occurring later in the growing season, effectively knocking back wireworm populations for three years.

After the withdrawal of lindane in 2004, several other insecticides that were effective on wireworm were also removed, including Temik, Dyfonate, Furadan and Counter. That left insecticide seed treatments containing neonicotinoids (Group 4A) as the only remaining options – clothianidin (Poncho, Nipsit, Titan), thiamethoxam (Cruiser) and imidacloprid (Raxil Pro Shield, Admire, Alias, Sombrero, Stress Shield).

The problem with neonicotinioid insecticides is that they aren’t as effective at killing larvae. Vernon found that larvae that contact the insecticide become moribund, rather like being intoxicated, and often appear asleep. The result is that there is good crop establishment and minimal impact on yield, but not a major decrease in larvae populations.

Lorne Thoen, product manager at Corteva Agriscience, says that Lumivia CPL acts on the muscle system of the insect, which paralyzes the larvae very quickly upon contact. As a result, the larvae stop feeding almost instantly.

Thoen explains that chlorantraniliprole activity lasts for about 30 days. “There is some wireworm mortality and it does reduce wireworm populations in the soil, but no registered product today has a high percentage of kill like lindane did.”

Lumivia CPL is compatible with fungicide seed treatments and Rhizobia inoculants. Thoen says it has a low application rate, and product development testing with many different types of applicators in 2019 showed that it can be easily seed-applied on the farm or by a custom seed treater.

Monitoring wireworm
Growers can also monitor for wireworms on their farm by setting out bait traps in the spring, prior to seeding. Pour one half-cup of wheat seed into a nylon stocking, cheese cloth or mesh bag and tie off the end with string. Soak the filled stocking in water for 24 hours. Bury the bait in the ground three to five inches deep and cover with soil. The carbon dioxide emitted from the bait will attract wireworm larvae. After 10 to 14 days, remove the bait trap and look for larvae.

Catton says that if growers find wireworms in their field, she would like to hear from them to help build an understanding of the distribution and species composition across the Prairies. There is a lot more to be learned about the wireworm problem on the Prairies.

“Bait traps are a good first step to understanding if you have wireworms on your farm, but we don’t have any correlation to know what the numbers mean; we don’t know how many wireworms in a bait trap are required before they start to impact yield,” Catton says.

To send in a wireworm sample, collect as many wireworms as possible from the bait trap and place them in a small vial of rubbing alcohol as a preservative. Include a brief description of when and where the sample was collected (nearest town or address), information about the crop rotation in the sampled field over the past four years, your name, mailing address and telephone number. Once the species are identified, growers will be contacted with the results.

Catton and her colleagues are writing a wireworm field guide that is expected to be released later this year.

“The wireworm species we have are all native, so they are really well adapted to surviving in our Prairie soils,” Catton says. “That also makes them really hard to control.”


Related
Tackling wireworm in Alberta
Digging into the wireworm threat to soybean
Wireworms on the increase?
The control of wireworms in Canada