Working towards economic thresholds for suppressing these serious pests. 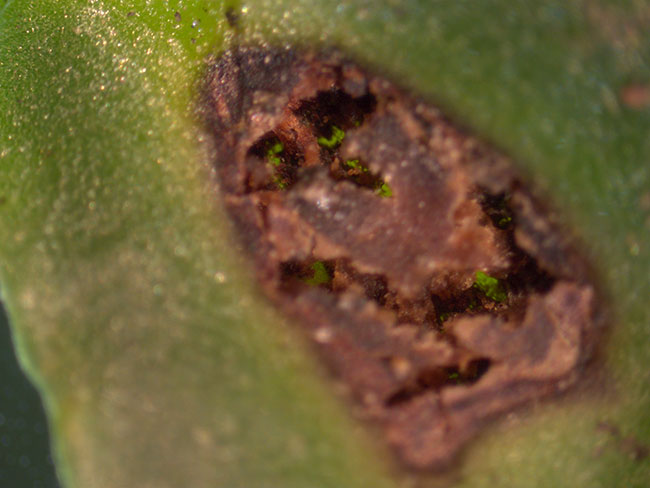 Wireworms can damage soybean seedlings as they germinate in the soil. PhotoS courtesy of Ivan Drahun.

Soybean is one of many crops – such as cereals, corn, potato, dry bean and more – that wireworms will attack. But exactly how serious is the wireworm threat to Manitoba soybean production?

Preliminary findings from a Brandon University project are showing the threat can be pretty significant.

“When we started this project, we were surprised that there wasn’t a lot of information on the extent of damage that wireworm causes to soybean in Manitoba,” says Bryan Cassone, the project’s principal investigator and an associate professor in the University’s Biology Department. “And we have been surprised to see just how much wireworm damage there is.”

Wireworms are the larvae of click beetles. Many different wireworm species are crop pests in Canada. These species differ from each other in terms of things like their feeding and habitat preferences and the timing and length of their life cycle stages.

The larval stage, which is the pest’s crop-damaging stage, is spent in the soil. This stage lasts several years, up to five or more in some species, and then the larvae pupate and emerge from the soil as adult beetles.

The larvae get larger – and more voracious – with each moult. Each year, they move up and down in the soil, going up near the surface to feed on the underground parts of plants and then retreating deeper to escape adverse conditions like hot, dry soil in summer or cold temperatures as fall turns to winter.

“In soybean, wireworms primarily damage the seeds and seedlings. They can damage the seed just by feeding on portions of the seed, and sometimes they completely hollow it out. In the seedlings, they can cause damage to the cotyledons, stems and roots. They cut off small roots and tunnel into the underground tissue, causing the plant to become quite wilted or stunted,” Cassone explains.

“In really infested soybean fields, we usually see large patches with limited plant growth. The larger the patches, the greater the wireworm infestation is – and the greater the yield impact will be.”

“Of course, lindane is banned. [Lindane was a seed treatment product that was very effective at killing wireworms.] The seed treatments available at present don’t actually kill wireworms in most cases,” he notes.

“Instead, they cause the wireworms to [temporarily] become less active, meaning that they feed less and cause less damage to the seed and seedlings. [That gives the soybean plant time to grow large enough to withstand wireworm feeding.]”

The ultimate goal of Cassone’s three-year project is to develop economic thresholds for applying seed treatments to suppress wireworm in soybean crops under Manitoba conditions. The project involves three studies that are collecting the information needed for figuring out those thresholds.

Wireworm field surveys
One of the project’s studies is assessing the prevalence and species composition of wireworms across Manitoba’s soybean-growing region through field surveys in 2018, 2019 and 2020. Each year, the project team samples about 25 randomly chosen fields, based on interest from the farmers.

The team is mainly using bait trapping to sample for wireworms, although they have done some work with other sampling methods. The bait is germinating wheat; it emits carbon dioxide, which attracts wireworms. The traps are buried one foot deep, and about 18 traps are placed along four or five transects across each field. The traps are collected about 12 days later and brought back to the lab to extract the wireworms. The trapping is done three times a year: in the spring before planting, in mid-summer, and in the fall after harvest. Spring trapping is proving to be the best option by far.

For each surveyed field, the team collects data on factors that might influence wireworm numbers and species, such as the crop rotation strategy, seed treatments and soil type.

“We have done two years of surveillance so far. We’ve found that over 90 per cent of the surveyed fields have species of wireworm that are known to cause crop damage,” Cassone says. “The southwest part of the province has the highest wireworm risk.” That is where they are finding the most wireworms and the greatest diversity in wireworm species.

So far, they have found six wireworm pest species. About 95 per cent of the wireworms are Hypnoidus bicolor. The other species are Hypnoidus abbreviates, Limonius californicus and Agriotes mancus, as well as two species that can only be identified to the genus level: a Dalopius species and a Hemicrepidius species.

Hypnoidus bicolor larvae remain in the soil for two or three years. Cassone adds, “I wish we knew more, particularly for bicolor, about their feeding preferences and relative amounts of damage in different crops.”

“There seems to be quite a shift in the wireworm species composition between Manitoba and other Prairie provinces,” he notes.

In the current Manitoba survey, the average number of wireworms per trap is ranging between 0.17 and 8.6, meaning that the wireworm levels in some fields could be a serious concern for soybean. Cassone explains, “We don’t know the economic thresholds for Manitoba yet, so we are using a U.S. threshold of 1 wireworm per trap. About a third of the surveyed fields are at or significantly above that level.”

For each surveyed field, the team provides the farmer with the field’s wireworm sampling results and offers recommendations on whether or not to apply a seed treatment to control the pest.

In 2020, the team plans to sample about 25 to 30 fields. They are also going to experiment with different bait trap designs to see if that influences the sampling results.

Once they have completed the surveys, they will be analyzing all the field data to look for correlations between wireworm numbers and species, the level of wireworm damage, and field characteristics like soil type and cropping history. 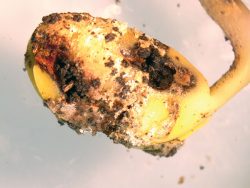 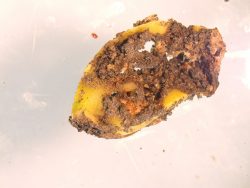 DNA-based study
The second component of the project is a DNA-based study to examine the genetic diversity in the Manitoba wireworm samples, to understand the dispersal patterns of the Manitoba species, and to compare the Manitoba results with the findings from the recent Saskatchewan and Alberta surveys.

“We have sequenced about 330 individuals from 13 different wireworm populations. We are focusing on Hypnoidus bicolor because that is what most of our specimens are,” Cassone says.

“From our very preliminary results, it looks like there is a great deal of genetic diversity [within Hypnoidus bicolor], and there seem to be discrete regional populations. For instance, the genetics in southwestern Manitoba are quite different from those in other parts of the province and the other Prairie provinces. This suggests that these wireworms don’t disperse very much.”

The team expects to complete the DNA analysis in a few more months.

Soybean damage assays
The project’s third study involves lab-based feeding assays to evaluate wireworm damage on soybean seeds and seedlings under various conditions. Using field-collected Hypnoidus bicolor wireworms, the team is comparing the effects of such factors as wireworm density, temperature, soil type and seed treatment on the amount of damage in soybean.

They have already finished the wireworm density assays. “We’ve taken wireworm at different larval stages and evaluated the effects of various densities of the larvae on different numbers of soybean seeds and seedlings,” Cassone explains.

“As you would expect, you get more damage in soybean as the wireworm density increases. But it is not a linear increase in damage; it is almost exponential.”

They are also finding that the bigger, later larval stages of Hypnoidus bicolor can be really destructive. “For instance, when we put three or four of those larger larvae in with 30 soybeans, nothing is growing by the end of the two-week trial. The plants don’t even make it out of the seed stage,” he says.

“About four of the bigger larvae have the same impact as about 20 of the smaller, younger larvae. If you have a lot of those bigger larvae in your field, it could be exceptionally devastating for your crop.”

Over the coming months, the project team will be conducting the assays on temperature, seed treatments and soil type.

Practical implications
“Once the three studies are completed, we will compile all the analyses and do our best to come up with a fairly accurate economic threshold for applying a seed treatment,” Cassone says.

To use the threshold, you would conduct bait trapping to assess the wireworm problem in your field. Patches of wilted, stunted or missing plants are a good indication of a wireworm infestation. You can check the roots of affected plants to look for wireworms, other insect pests and diseases that might be causing the problem. Then, if you know or suspect that you have a wireworm problem, you would use several bait traps to sample for wireworms in the spring before planting soybean. And then you would use your wireworm counts with the economic threshold formula to see if a seed treatment would make sense for your soybean crop.

The project’s results should help Manitoba farmers and crop advisors in making more informed decisions on the management of wireworms in soybean crops.


Related
Tackling wireworm in Alberta
The control of wireworms in Canada
Evaluating the effect of hail damage on soybean maturity, yield and quality
Assessing the swede midge threat