Reducing potential yield losses at harvest, particularly from pre-harvest shattering and pod drop losses, is a priority when harvesting canola. Whether straight combining or swathing, timing of harvest is proving to be one of the most important factors in reducing the risk and magnitude of yield losses.

Researchers at the Indian Head Agricultural Research Foundation (IHARF) in Saskatchewan have wrapped up a four-year study initiated in 2011 to evaluate the relative resistance to pod shatter and pod drop of high-yielding Brassica napus hybrids. The project was conducted at four sites including Indian Head, Melfort, Scott and Swift Current. Researchers evaluated the potential for pod shattering and pod drop of several modern B. napus hybrids across all herbicide systems, including some of the new shatter tolerant varieties.

“With the increasing interest in straight combining, we wanted to evaluate a range of cultivars, including some of the newer shatter tolerant varieties, and identify some that may be particularly well suited for straight-combining,” explains Chris Holzapfel, IHARF research manager. “We compared two harvest dates – one at optimal harvest timing and the final harvest completed three to four weeks later – to see what would happen when harvest was delayed due to weather or other factors. We also wanted to quantify the environmental seed loss contributions from pod drop versus pod shattering under a wide range of environmental conditions.” All canola in the study was straight-combined; however catch trays were used to measure and account for any seed losses that occurred prior to the first harvest date.

“The major finding was that overall timing of harvest was more important than variety,” says Holzapfel. “Regardless of the variety, environmental and crop conditions was the major determinant of yield losses. As well, pod drop versus pod shatter was an important contributor to yield loss.”

The biggest losses on average were from the later harvest date, with pod drop responsible for 43 per cent of the total environmental seed losses with delayed harvest across all hybrids and sites. Losses at delayed harvest ranged from less than five per cent at some sites to more than 50 per cent in one extreme case. At early harvest timing, yield losses from pod drop were typically negligible, averaging 2.5 per cent across all hybrids and sites.

Although the evaluation of various cultivars did show some differences, they were not always consistent from site to site. In an effort to summarize the large data set, all of the hybrids evaluated at any given site were ranked for significant differences compared to the top ranking hybrids for each site (i.e. those with the lowest losses). “The best varieties were ranked a 1, with those showing significantly higher losses ranked a 2 and those with the highest losses receiving a ranking of 3,” Holzapfel explains. “Generally the performance of most of the hybrids was similar under favourable conditions; however substantial losses in all cultivars occurred when severe conditions were encountered. For example, in years where conditions were challenging, such as the severe wind events in 2012 and higher than usual sclerotinia incidence, all of the cultivars were impacted and there were severe losses in all treatments, in some cases more than 50 per cent losses. Hybrids specifically bred for improved shatter tolerance (i.e. L140P and 45H32) were introduced to the study in 2013 and, while overall losses were lower in the latter two years of the study, these hybrids did perform consistently well and can be expected to reduce the risk of yield loss with delayed harvest or severe weather.”

Timing of harvest is important to minimize losses, so in situations where there is quite a bit of variability in the field, growers may want to consider a pre-harvest treatment, although it’s not always necessary. “One of the lessons learned over the years is to be patient, don’t go in too early,” Holzapfel says. “That said, once the canola is ready, harvesting it as soon as possible needs to be a priority to prevent losses. And there is no way around getting into the field and assessing the colour change throughout, not just from the edge of the field. There can also be differences in colour change and varieties from year to year – sometimes the pods will turn but the seeds can still be green; in others there will be seed colour change, but relatively green pods.”

The timing for glyphosate application in Liberty Link canola for straight cutting or swathing is at 50 to 60 per cent colour change. In all systems, the timing of application for desiccant products is at 80 to 90 per cent colour change. Holzapfel adds when there is quite a variation in canola staging, like we are seeing in 2015, assessing harvest timing gets more difficult and can be tricky. “Thin stands may be well suited to straight cutting, and although there may be some losses, there will also be losses from swathing, so there is no easy solution.”

Both systems, whether swathing or straight-combining, have risks, with timing of harvest the most important management factor. Recent research at the University of Saskatchewan on commercial farms showed that total seed losses (environmental + header + threshing) for swathed and straight-combined canola were equal and ~10 per cent on average. “Swathing too early results in significant yield loss due to smaller seeds and can lead to higher green seed counts,” Holzapfel explains. “Swathing too late results in yield loss due to pod shatter. Similar to straight-combining, the risk of environmental and header losses increase over time as canola swaths remain in the field, but for straight-cutting, harvest timing is usually more critical than with swathing. Therefore, growers should limit straight-cut acres to what is easily manageable to gain experience and confidence in the practice.”

Overall, the project results indicate all hybrids evaluated could be straight-combined successfully provided that harvest was completed in a reasonably timely manner. Other factors such as overall yield potential, days to maturity, standability and herbicide system are still the most important factors to consider when choosing a canola hybrid with the intention of straight-combining. Hybrids with improved pod shatter tolerance lengthen the window for straight-combining and reduce the overall risk of yield loss.

There are new shatter tolerant varieties coming on the market for 2016, and Holzapfel expects that more varieties will continue to be released in the future.

“We know that most existing equipment will work adequately, including draper, rigid and flex headers,” Holzapfel says. “Header extensions significantly reduce header losses and are a good option for straight-combining large acres of canola, and headers with variable knife position should provide similar benefits. We are collaborating on another three-year project led by Nathan Gregg of PAMI that started in 2014 to evaluate the performance of commercial straight-cut headers for canola using full-scale machinery and large plots at Swift Current, Indian Head and Watrous. Harvest treatments will be evaluated on two varieties, a standard canola variety InVigor L130 and a shatter resistant variety InVigor L140P.” The final report and results will be available in 2016. 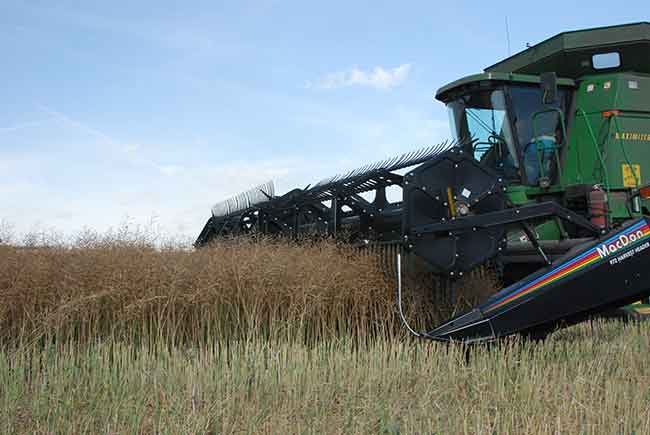