Let’s say there’s an unusual symptom on some plants in your crop. The symptom looks like an early stage of a devastating fungal disease that needs an immediate fungicide application to stop its spread. But the symptom also looks like a very different problem, perhaps a nutrient deficiency or a herbicide injury, where a fungicide application would be a waste of money. If you could determine right then and there whether those plants actually have that disease, then you could make a timely, effective management decision.

That type of accurate, immediate, on-site diagnosis is the goal of a project that’s developing in-field DNA diagnostics.

“Before I came to Agriculture and Agri-Food Canada, I was at the National Microbiology Lab [of the Public Health Agency of Canada], and I knew about their mobile diagnostics laboratory. They have deployed it in several places, including the recent Ebola outbreak,” says Tim Dumonceaux, an expert in microbial communities and molecular methods at the Saskatoon Research Centre of Agriculture and Agri-Food Canada (AAFC). “When I came here, I thought the advantages of a mobile lab could be brought to agriculture.”

Dumonceaux explains that laboratory DNA testing for crop diseases usually involves going out to the field, collecting samples, putting them on ice, driving them back to the lab, extracting the DNA and then doing the diagnostics. “It might take days or weeks before you get the results and find out what was in the field days or weeks ago,” he says.

“[In contrast] mobile DNA diagnostics have the advantage of speed both for containment of a disease outbreak and for surveillance, so we know when and where diseases might be cropping up in agricultural fields.”

Dumonceaux is leading the two-year project, which started in 2014. The objectives are to develop practical field methods for extracting DNA from samples and for analyzing the extracted DNA for pathogens, and to test these methods in the field at AAFC research farms.

The project is funded by Saskatchewan’s Agriculture Development Fund and the Saskatchewan Canola Development Commission. In addition, AAFC has provided funds to purchase two Genie instruments used for the in-field DNA analysis.

“One reason we chose those three is that they are all agriculturally important pathogens,” Dumonceaux says.

“The second reason is that there is a significant amount of expertise in these three diseases right here at the Saskatoon Research Centre.” The other researchers in the project are all at AAFC-Saskatoon. They include: Matthew Links, who has expertise in genomics, including the genomes of blackleg and clubroot; Hossein Borhan, an expert in molecular plant pathology whose lab generated genome sequences for the blackleg and clubroot pathogens; and Chrystel Olivier, an entomologist specializing in aster yellows diseases.

Another reason for choosing those three diseases is they allow the research team to work with various sample types. For blackleg, stem tissue is sampled. For clubroot, a soil-borne pathogen, the soil is usually sampled. And for aster yellows, leaf and insect tissues are sampled because infected insects spread this disease by feeding on leaf tissue.

Developing in-field DNA diagnostic methods has its challenges. “Getting the DNA out [of a sample] into a form that will be usable in a molecular diagnostic assay in a mobile environment is one of the most important challenges. In the lab, we might use phenol and chloroform and centrifugation steps and so on, but those are not feasible in the back of a truck. So we are investigating ways around that,” Dumonceaux notes.

“A second challenge is associated with the limit of detection of an assay. You don’t want an assay that is so sensitive that it picks up a few molecules of DNA of the target organism because that can lead to what is effectively a false positive – it makes you think you’ve got a problem, when really it is at such low levels that it is not a problem. On the other hand, if your detection limit is too high, then that might lead to a false negative, where you should have detected a pathogen but your test was not sufficiently sensitive. That can be a problem especially for a disease like clubroot where you are worried about spreading contaminated soils. So we want to get what you’d call in the human health world a ‘clinically relevant’ level of detection.”

A further hurdle is to relate the detection of a pathogen’s DNA to the pathogen’s ability to cause disease. Dumonceaux explains, “Just because you detect DNA doesn’t necessarily mean it comes from a viable or infectious organism. DNA is a reasonably stable molecule, so you sometimes can find DNA that is not necessarily reflective of infectivity.”

To carry out the in-field assays, the research team is using LAMP, which stands for loop-mediated isothermal DNA amplification. Amplification is the process of making many copies of a selected portion of an organism’s DNA. “In a sample, you might have only a few molecules of the organism’s DNA within a matrix of millions of copies of things that you are not interested in. So the idea is to very specifically amplify a target DNA sequence of the organism, and you can detect that amplification,” Dumonceaux says.

The researchers call this assay procedure “lighting the LAMP” because the samples have a fluorescent glow when a positive detection of a pathogen’s DNA occurs.

To use LAMP, the researchers first have to design what are called “primers” that detect the target DNA sequence for the pathogen. “The choice of which particular DNA sequence to target is really important,” Dumonceaux explains. “We’ve done lots of work in the past with a taxonomic marker called chaperonin 60. Chaperonin 60 is present in bacteria and fungi [as well as in other organisms such as plants and animals including humans]. For the most part, the sequence of that particular target gene is diagnostic for the particular organism, so we call it a ‘DNA barcode.’”

So, when developing such primers, they usually start by trying chaperonin 60; however, there are other types of taxonomic markers, and some work better than others for certain organisms. “In the case of the three pathogens that we have chosen, we also have the entire genome sequence for each of them. So, if for whatever reason chaperonin 60 isn’t ideal, then we have a raft of other potential target DNA sequences that we could choose that are highly specific to that organism.”

Once the procedures are developed, the research team tests the process to make sure it gives valid results – that it is able to detect the target pathogen species, that it provides a relevant level of detection, that it doesn’t detect other similar species, and so on.

Progress and next steps
The researchers’ main focus in 2014 was to develop the diagnostics for the three pathogens, and they also did some initial field testing of the methods.

“[As of July 2015] we’ve already sewn up the development of the assays, and much of the validation is nearly complete. The key work for 2015 is to get the assays working in the field,” Dumonceaux says.

Once this project is complete, the next step would be to scale up the work by developing in-field assays for other crop pathogens and by bringing the diagnostics to commercial agricultural fields.

Dumonceaux thinks the initial users of these in-field diagnostics would likely be crop technicians, crop advisors and so on, but he would really like to make the methods sufficiently streamlined so they would be practical for crop growers to use.

“One of the things we’re working on is providing all the reagents required for the detection assay in a dried format so you just add water,” he notes.

They also hope to speed up the diagnostic process. “The way we had it set up last year, DNA extraction took about 15 minutes to half an hour for a sample, although you can do multiple samples at once. Then for the actual assay, the speed depends on the amount of target DNA in the sample. If there are large amounts of the target DNA, the assay takes as little as about 20 minutes to get a positive detection; if there are very low amounts, then it could take up to about 90 minutes,” he says.

“But we think we can streamline the DNA extraction method by using commercially available Plant Saver Cards. You press the material to be tested into the card and that helps you do the DNA extraction very quickly. We’re going to assess that this year.” 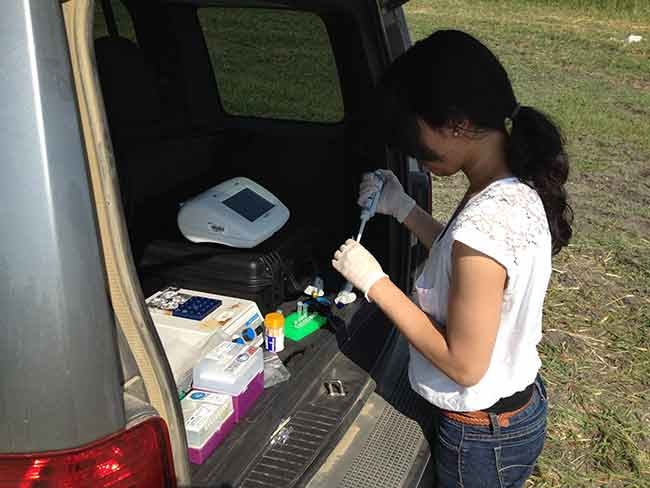 Sandeep Hunjan Let’s say there’s an unusual symptom on some plants in your crop. The symptom looks like an early stage of a devastating fungal disease that needs an immediate