Successful canola establishment continues to be one of the greatest challenges for growers in Alberta and Western Canada. Rising seed costs of new cultivars also have made it more important than ever to efficiently achieve target plant populations.

In addition, changes in canola production may have caused some fundamental shifts in susceptibility to seedling blight and root rot.

“Producers have noted much more severe infestations of seedling blight and root rot in canola fields,” says Dr. Sheau-Fang Hwang, research scientist with Alberta Agriculture and Rural Development (AARD) in Edmonton, Alta. “In the Peace River and central regions, most fields are affected, with up to 80 to 100 per cent infected plants. There have also been some observations of inconsistent protection of seedlings by seed protectant fungicides.”

Hwang and her team conducted a four-year project from 2007 to 2011 to identify the organisms associated with the increased incidence of root rot in hybrid canola crops. The project also identified strategies to improve seedling establishment, seedling vigour and seed yield of canola by optimizing chemical and cultural methods to reduce the impact of seedling blight and root rot on canola stand establishment and plant yield.

Canola seedlings are vulnerable to seedling blight caused by several soil-borne pathogens during the period between water uptake prior to germination and the two- to four-leaf stage. Direct seeding and early seeding often mean canola seedlings must germinate in colder, wetter soils. This may contribute to the increased seedling blight experienced by producers. The tendency to shorter canola rotations over the past few years may also be contributing to higher soil-borne disease incidences.

“In the greenhouse and small field plot studies, we compared a non-inoculated control plot to plots inoculated with Pythium, Rhizoctonia or Fusarium pathogens collected from the disease survey sites,” explains Hwang. “We were trying to determine the impact of the pathogens on seedling emergence and yield. We also were trying to determine the effect of seed size, seeding date and depth, and fungicidal seed treatments on canola establishment and yield.”

The results showed that soil-borne diseases, particularly Rhizoctonia, can severely reduce seed germination. “Our results showed that the losses in the plots inoculated with the pathogen Rhizoctonia solani were greater than for either Fusarium or Pythium,” says Hwang. “Therefore, Rhizoctonia solani may be responsible for many of the losses, both seedling emergence and yield in canola, experienced by canola producers.”

Researchers also identified some cultural and chemical control practices that can help growers manage soil-borne seedling diseases. “Our research confirmed that shallow seeding is a good strategy for canola establishment,” explains Hwang. “Canola seed planted at greater depth showed reduced establishment in both greenhouse and field studies. Despite potential seedling disease problems, seeding early was important in order to maximize yields. We also compared seedling establishment of canola seeds of different sizes. Although we thought there might be differences, overall the results from the field trials were inconsistent, indicating that seed size did not make a significant difference to seedling establishment.”

Generally speaking, newer seed treatments tend to offer a broad spectrum to control various soil-borne diseases. “Unfortunately, identification of soil-borne pathogens is very difficult and growers will usually have to wait until after germination to look at diseased seedlings,” adds Hwang. “Therefore, using a broad spectrum fungicidal seed treatment is a good practice to improve seedling establishment and reduce the risk of soil-borne seedling disease, particularly in early-seeded crops.”

Like most plant diseases, there needs to be three main factors in place for disease to occur. Both the pathogen and the host crop must be present, as well as suitable weather conditions. “Unfortunately, each pathogen has its own preferences: Pythium prefers cool, moist conditions while Fusarium prefers warm and dry conditions,” explains Hwang. “Each pathogen has its own niche, and different weather conditions will increase the chance for different populations of fungus to take off. A pathogen like Rhizoctonia can infect oilseeds, pulses and other crops, and is not as host-specific as others.”

As with other canola diseases, growers are encouraged to use longer rotations of three or four years to break the disease cycle. “Using longer rotations combined with shallow seeding and seed treatments can help improve germination and achieve targeted plant stands,” says Hwang. “Everything growers can do to make sure every seed successfully germinates and achieve target plant populations will improve the profitability and success of the final canola crop.” 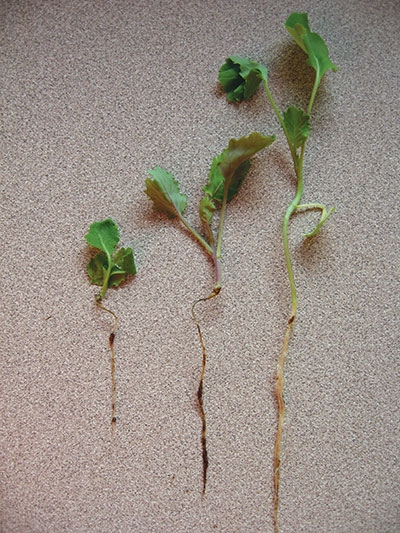 Comparison of four week seedlings: left Successful canola establishment continues to be one of the greatest challenges for growers in Alberta and Western Canada.