AC Saltlander green wheatgrass has been enthusiastically received because of its salinity tolerance, which is equal to tall wheatgrass. With the potential to compete with foxtail barley at all salinity levels, AC Saltlander can reduce herbicide costs and provide good forage yields on saline soils measuring into the severe range.

“The high cost of seed can be a barrier for farmers wanting to establish AC Saltlander on their saline soils. Salinity isn’t going away, and with all the rainfall in recent years it may even be getting worse,” says Ken Wall, a technician at the Semiarid Prairie Agriculture Research Centre (SPARC) at Swift Current, Sask.

In the first test on severely saline soil, AC Saltlander was sown in a mixture with Revenue slender wheatgrass. The site received a pre-seed application of glyphosate, and was cultivated and harrow-packed. A disc-drill forage plot-seeder with six discs spaced 12 inches apart was used to seed each plot. The plots were seeded on May 12, 2009, and received an application of Pardner herbicide at 0.4 L per acre on June 30, 2009.

There were three seed mixture treatments:

“Slender wheatgrass is a bunch grass that is relatively short lived, especially under saline conditions. AC Saltlander has a creeping root system. We thought that if we planted them in a mixture, the slender wheat grass could provide good forage yield and weed competition for a couple years, while the AC Saltlander would eventually grow to fill in the stand,” explains Wall.

Ideal growing conditions in 2009 resulted in excellent stand establishment. The plots were not harvested in the year of establishment, and three subsequent harvests were conducted in 2011, 2012 and 2013. In 2013, subplots were hand-harvested in each plot. Foxtail barley and the green wheatgrass biomasses were separated, oven dried and weighed.

No significant differences in forage yield were recorded among the treatments in each growing year. With the very good stand establishment, the grasses competed very well with foxtail barley, and virtually no foxtail barley was present in the plots.

“In this test, we were able to reduce the establishment costs by cutting AC Saltlander seeding rates in half and replacing it with the lower cost slender wheatgrass,” says Wall. “By the end of 2012, due to the high level of salinity and competition from the green wheatgrass, all the slender wheatgrass had died out.”

A look at cutting seeding rates
In the second test on severely saline soil, a seeding rate trial was conducted using seeding rates of 2.5, 5, 10 and 15 lbs/ac of AC Saltlander seed. The plots had a pre-seed glyphosate burndown, and were cultivated and harrow-packed. The plots were seeded with a plot-seeder with six discs on 12-inch row spacing. The plot was seeded on June 16, 2011. The plots received an application of 2,4-D at 0.38 L per acre on June 1, 2012, to control kochia.

During the establishment year, Wall says the growing conditions favoured kochia and foxtail barley growth, and resulted in significant competition with the emerging AC Saltlander. Plots were harvested in 2012 and 2013.

In 2012, no significant differences in forage yield were observed between the seeding rates. Kochia had been eliminated from the plots, but significant levels of foxtail barley were observed.

“Our big worry was that reduced seeding rates would come at a cost of increased foxtail barley. Except for the 2.5 pound rate, that didn’t happen,” says Wall. (See Fig 1.)

These results will be supplemented with an additional harvest in 2014, but the preliminary results indicate that it may be possible to reduce the seeding rate of AC Saltlander green wheatgrass to about five lbs/ac without affecting yields and allowing increased competition from foxtail barley on this severely saline site.

Researchers at Swift Current hope to conduct other research on AC Saltlander establishment practices to help make the wheatgrass even more accessible to farmers. They would like to see if zero-till with air seeders on nine-, 10- or 12-inch row spacing could be successfully done and at what seeding rate. Another approach would be to use a Valmar granular applicator with seed incorporation done with a rotary harrow. Since most saline sites are very wet in the spring, they would also like to research the success of fall dormant seeding.

“AC Saltlander has lots of potential, and if we can figure out ways to reduce stand establishment costs, and find ways to establish it without special seeding equipment, AC Saltlander definitely has potential to be a crop farmers can use to combat salinity,” says Wall. 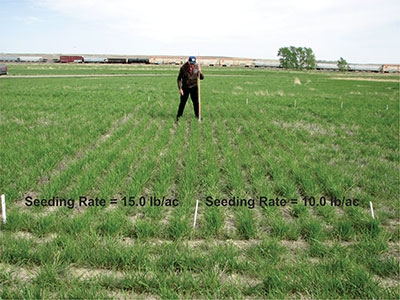