According to Angela Brackenreed, an agronomy specialist for the Canola Council of Canada, seed losses during canola harvest are often higher than producers might think – about two bushels per acre on average, but can reach double digits in in extreme cases. 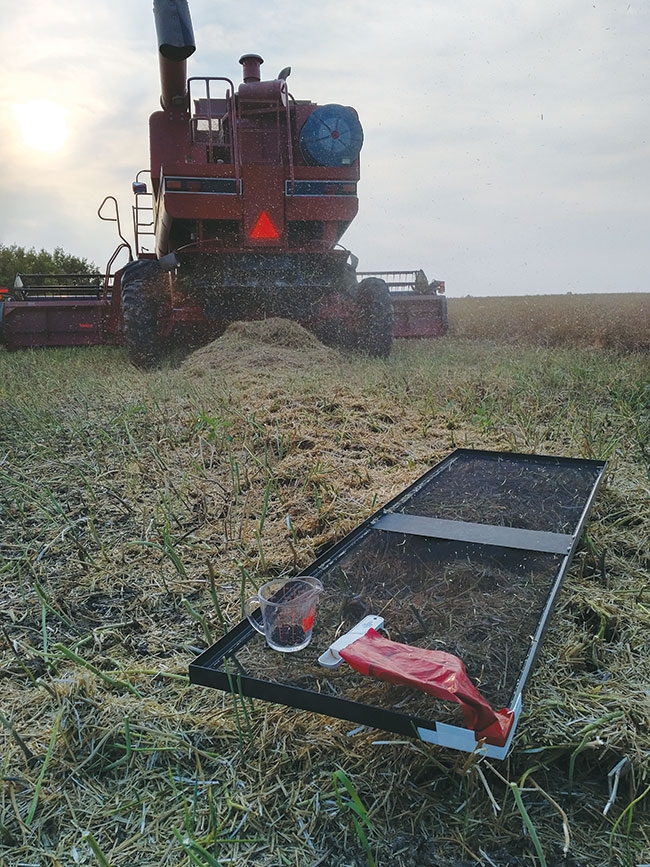 Most size and styles of pans can work for the loss measurement process. Here According to Angela Brackenreed

A few years ago, University of Manitoba plant scientist Rob Gulden conducted an absolute loss survey across the Prairies after harvest, measuring losses due to environmental causes, as well as header, shatter and threshing losses. “There was a big range, and it really highlighted how complex canola losses are,” Brackenreed says. “What the study did show was that in a lot of cases losses are higher than people would expect or want to see – over 10 per cent in some cases.”

Threshing losses should be in the range of one to two per cent if producers can manage to balance acceptable losses and efficiency, she says. Brackenreed’s focus is on educating producers on how to measure losses and calibrate their equipment to reduce them. The good news is that it’s possible to reduce losses to that two per cent or less range with a little extra legwork.

Get ready for the season
Producers can take steps to minimize harvest seed losses well before harvest actually begins, by collecting a few key materials and getting prepared for the season, Brackenreed says.

The most important of these materials is a drop pan or other measuring device that can be used to capture residue heading out the back of the combine once the chopping and spreading mechanism is disengaged. Magnetic drop pans connect magnetically to the belly of the combine and can be released remotely, which makes the process easier and safer.

Producers will also need a volumetric cylinder or scale, and ideally a screening system, says Brackenreed, for separating the seed and taking a measurement by weight or volume. This number can be punched into an app to generate a loss measurement. The Canola Council of Canada (CCC) and the Prairie Agricultural Machinery Institute (PAMI) have also produced a pocket reference guide for losses.

Brackenreed recommends producers do a thorough evaluation of seed losses and setting adjustment at the beginning of the harvest season, and as often as they can manage it – from morning to afternoon, and field to field, or anytime there is a significant change in conditions – during harvest.

“Every combine has a loss monitor but these are typically not accurate enough to give us a good picture,” she says. “They’re good tools but if they’re not calibrated properly, by actually measuring what’s coming out the back of the machine, they can be next to useless.”

Settings and speed
Brackenreed says modern combines have a lot of power but when they’re operating at high speeds, the cleaning system can’t always keep up. Accordingly, she says speed is the first setting she looks at for its impact on losses.

“With too high of a feed rate, we tend to overload the cleaning system and, for example, can have seed slough right out the back of the machine, exponentially increasing our losses,” she says.

But adjusting settings isn’t only a matter of adjusting speed. Producers should also check fan speed, rotor speed, concave clearance and, as they get to the back of the combine, top and bottom sieve openings.

Because changing one setting can have an impact on other settings, what the CCC recommends is changing one setting at a time during a loss evaluation so it’s easier to zero in on the source of the problem. “Most producers know that these main settings should be adjusted, but the ease of doing so can lead to overzealously changing settings,” Brackenreed says.

“If you change your rotor speed, that can have an impact on the back end. A change in fan velocity can impact material flow and require a change of sieve opening or vice versa. It’s quite complex but you can eliminate some of the uncertainty by changing one setting and checking again.”

But it’s important to consider the fact that not every variable is under the producer’s control. Sometimes straw conditions can be the limiting factor ­– not combine settings, she says. “There are conditions where you can’t get those losses into the acceptable range – sometimes the producer has to get the crop off and accept those losses, but sometimes the best thing is to give it more time.”

Tools for measuring loss
Nathan Gregg, a program manager of applied agricultural services at PAMI, says the organization has spent a lot of time optimizing combines and testing them. “We feel that there’s a message there for producers that trying to go through the exercise of determining combine loss is the first step in managing it,” he says.

He says there are several tools available to producers to assist them with harvest loss measurements, including the seed loss guide from PAMI, which has recently been updated.

PAMI is also working with the CCC on an app that will work as an interactive problem-solving tool for producers evaluating harvest losses.

“It’s meant to guide producers through the steps of adjusting a combine in the right pattern to get a better sample and reduce losses without having to understand all the intricacies of how the machinery works,” Gregg says.

Joel McDonald, a program manager at PAMI, says the app works like a flow chart for diagnosing problems with harvest losses; once diagnosed, the app helps producers decide how to achieve acceptable losses. “So, you either make adjustment to improve your loss at the current ground speed or vice versa. That’s the purpose of this app.”

PAMI just completed work on a project in Saskatchewan looking at the effectiveness of grain loss monitors.

“Often there’s a chart or a bar graph monitoring system in the cab but unless you calibrate it you don’t know what the graph means – it’s a unitless indication of how much loss you have,” Gregg explains.

The study’s results will be released this spring, but McDonald says the team was surprised to find that in the conditions they tested for losses in wheat and peas, combine monitors were more accurate, but in canola the monitors didn’t correlate as well with actual losses.

“The more information we can provide farmers, the better chance they have of doing a good job. We can’t blame them for being ignorant of loss if we don’t provide them with the tools to make those decisions,” he says.

Online harvest loss apps can be found at agrimetrixapps.com/harvest-loss/#/ and farmpro.ca/ref/CombineLoss/index.html. The seed loss guide can be found at pami.ca/resources/other-information/calculators/.