Like most crop diseases in 2017, infestation levels and severity of stripe rust were low, because of the warm, dry weather that occurred in many parts of Alberta and Saskatchewan. Going into 2018, the risk of stripe rust developing in Alberta will depend on the spores blowing up from the United States. 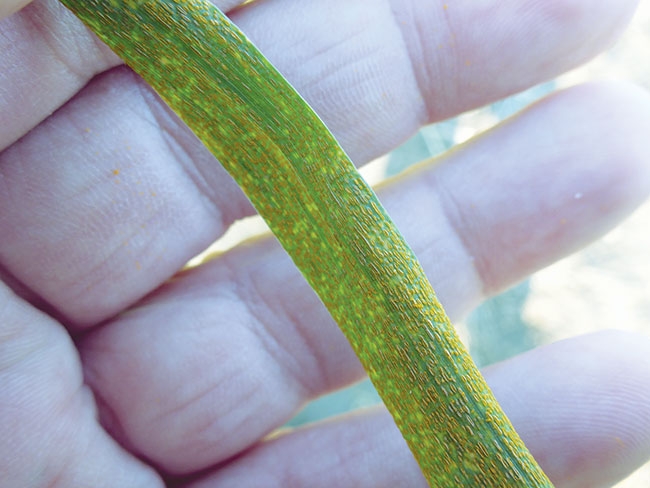 Stripe rust infestations in 2018 will largely depend on winds blowing the pathogen up from the United States. Like most crop diseases in 2017

“We have to keep an eye on what the rust situation in the U.S. will be this upcoming growing season. Rust spores usually travel with the wind from the U.S. into Canada, and if the inoculum arrives early enough, and if weather condition are favourable for rust infection and development, we may get bad disease regardless if the pathogen overwinters locally or not,” says Reem Aboukhaddour, a research scientist with Agriculture and Agri-Food Canada (AAFC) in Lethbridge, Alta.

Stripe rust is caused by the fungus Puccinia striiformis and has the potential to severely infect winter and spring wheat, causing defoliation, shrunken kernels and yield loss. It is primarily a disease of cool climates, and is most commonly found in southern and central Alberta, although it also occurs in Saskatchewan and Manitoba. Recent outbreaks of cereal stripe rust in Alberta occurred in 2005, 2006 and 2012 and were attributed to mild winters and cool, wet summers. In Saskatchewan, 2011 was an epidemic year.

In Alberta and Saskatchewan, stripe rust infection occurs mainly from spores blown up from the Pacific Northwest of the United States. Spores may also blow up from Texas to infect Manitoba and Saskatchewan wheat fields. When spores arrive, they need several hours of moisture on plant leaves to germinate and infect the host plant. Older races of stripe rust germinate at between eight and 12 C but new races can now germinate at temperatures up to 18 C.

Symptoms appear about one week after infection. Fungal mycelia from the spores grow, resulting in a yellow stripe appearance following the production of spores that extends the entire length of the leaf. Production of spores takes place eight to 14 days after infection and are dispersed causing additional infections. Several infection cycles can occur and infect the middle and upper parts of the plant canopy, causing yield reductions.

Research in 2007-08 and in 2015-16 by Kequan Xi and Krishan Kumar with Alberta Agriculture and Forestry found that stripe rust can also overwinter on winter wheat in central Alberta (Lacombe and Olds). At AAFC Lethbridge, Aboukhaddour has been monitoring stripe rust infections and overwintering potential. In November 2016, stripe rust was observed on winter wheat. Subsequently, a few winter wheat plants were recovered from under the snow blanket on Dec. 23, 2016. These plants showed no visible sign of rust infection, but when the plants were placed inside a growth chamber, stripe rust developed within three weeks.

“This was clear evidence that stripe rust was overwintering as a dormant mycelia inside the green leaves. In early March 2017, stripe rust was also observed on winter wheat plants in the field,” Aboukhaddour says.

In surveys conducted by Aboukhaddour during the spring/summer season of 2017, only one field out of 64 had a severe infection (less than two per cent), and that infection was found only at the edge of that field. Most of the infected fields were at trace or light levels of infection, and 75 per cent of the surveyed fields were reported clean.

“You could say 2017 was not a bad year because in 2016 about 11 per cent of surveyed fields suffered severe infection by the stripe rust in southern Alberta,” Aboukhaddour says. “The exceptional dry and hot weather and the lack of precipitation in 2017 spring and summer created unfavourable conditions for infection and disease spreading, compared to 2016.”

What’s in store for 2018
Aboukhaddour conducted surveys in the fall of 2017 in southern Alberta and could not find any rust infections. She says given the low incidence of stripe rust in the spring and summer of 2017 and absence in fall 2017, the likelihood of it overwintering into 2018 in southern Alberta is low. That leaves the potential for stripe rust infections dependent on spores arriving from the United States.  However, Xi and Kumar observed light to intermediate levels of stripe rust at the seedling stage in four of 14 winter wheat fields in October of 2017. So winter wheat growers in central Alberta should scout their fields in early spring 2018, especially where stripe rust symptoms were observed during the previous fall.

Stripe rust infestations in 2018 will largely depend on winds blowing the pathogen up from the United States.

Kutcher and Tatiana Vera Ardila, masters of science grad student, are also wrapping up a research project on stripe rust impact on spring wheat. Kutcher says results to date indicate when seeding date was “normal” (roughly mid-May) in central Saskatchewan, most often the optimum time for fungicide application was at heading. If seeding was delayed into early June, then in some years (cool, moist springs) they were getting reasonable responses to fungicides at earlier application timing around the jointing stage of the crop.

One of the cornerstones of stripe rust management is selecting a variety with some level of resistance. Most spring, durum and winter wheat classes have varieties with resistant or moderately resistant ratings. The challenge for wheat breeders is the wide range of races of P. striiformis. Depending on the climate and the use of resistant varieties, the population of pathogen races may be constantly changing. Additionally, some of the resistant genes are temperature or light sensitive and may not activate to provide resistance.

“There is a wide range of reaction to infection from very susceptible to very resistant,” Aboukhaddour says.

Kutcher says if growing a susceptible spring wheat variety like AC Barrie, foliar fungicide application provided a high yield improvement in an epidemic year, such as in Saskatchewan in 2011. For moderate resistance (MR) varieties, fungicide response can depend on the type of resistant genes in the variety. CDC Imagine carries one resistance gene, Lr34/Yr18, and may not benefit from fungicide application if the severity of disease is moderate, but in a severe stripe rust year, MR cultivars could benefit economically from a foliar fungicide.

“Cultivars with multiple stripe rust resistance genes, such as Lillian, did not benefit from foliar fungicide applications in our study,” Kutcher says.

Kelly Turkington, plant pathologist with Agriculture and Agri-Food Canada in Lacombe, Alta., has seen similar interactions between variety resistance and foliar fungicide response. “My general feeling is that varieties rated R [resistant] or MR [moderately resistant] will not show any response or very limited and likely not economic to fungicide application. As the level of resistance declines, varieties with a VS or S [very susceptible or susceptible] rating will show substantial responses – 20 to 50 per cent increase in yield when stripe rust is severe,” he says. “Regional differences can be a factor. At Lacombe, varieties like Radiant still show limited to no response to fungicide because the pathotypes in central Alberta are not as virulent on this variety as they are in southern Alberta, where Radiant may show more of a response.”

Given the unpredictable nature of stripe rust incidence, Turkington says agronomists and growers should make disease scouting a key part of their spring activities. Plant pathologists monitor for the arrival of the pathogen in the spring and provide alerts to agronomists if the pathogen arrives.

“Good technology transfer and extension are key, and alerts to growers and industry would indicate potential issues and the need to do careful field inspections. Based on these inspections for symptoms of stripe rust, growers could spray early if needed and then again later if necessary,” Turkington says.  “Growing susceptible varieties and a favourable environment [cool and moist] would also exacerbate the risk.”