The first step in a forecasting system for a serious disease threat. 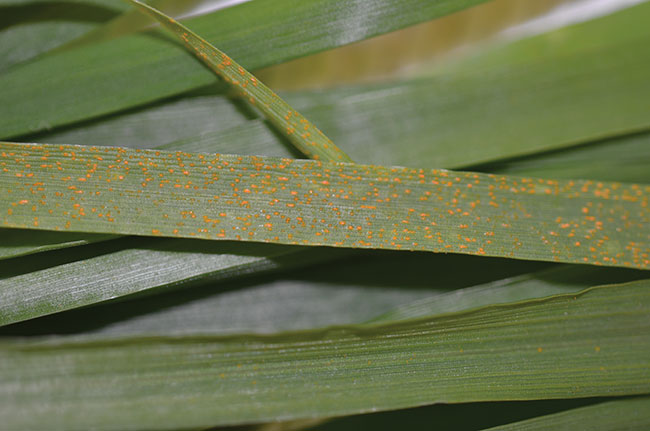 Stripe rust pustules are scattered over the leaf surface in young plants. Photo by André Laroche.

Canadian researchers are working towards a real-time forecasting system for major airborne wheat pathogens in Western Canada. The goal is to provide timely, accurate information to help growers in making disease management decisions. One of the diseases the researchers are working on is stripe rust. And their first step in that work was a project to develop a better method for counting stripe rust spores, for an improved forecasting process.

This project and other stripe rust research activities are helping to provide tools that growers need to fight this fungal disease, which can cause devastating yield losses in susceptible wheat varieties.

Stripe rust has emerged as a major concern in the western Prairies over the past two decades due to changes in the pathogen.

“Stripe rust has always been present in the irrigated area of southern Alberta. Until recently, this pathogen liked cool nights and high humidity, so the microclimate of southern Alberta under irrigation was perfect for the disease,” explains André Laroche, a research scientist with Agriculture and Agri-Food Canada (AAFC). His research relates to stress biology in plants, including stress from different fungal diseases. And since he is based in Lethbridge, he has always been involved in some stripe rust research, such as contributing to the development of resistant wheat varieties.

“Soft white wheat is a class of wheat bred specifically for this area; it has fantastic yields under irrigation. So in the soft white wheat breeding program, stripe rust resistance has always been a number one priority.

“But for the wheat classes grown on dryland in Alberta, stripe rust wasn’t a problem because the conditions weren’t suitable for the pathogen to develop and spread.”

“In southern Alberta before 2000, the end of June would come with nice, warm days, and stripe rust would stop proliferating because the conditions were too dry and too hot. But starting in 2000, people began seeing stripe rust in late June and all July, indicating the presence of new isolates that were more aggressive and better able to survive in warmer weather. And some of these isolates were defeating some known stripe rust resistance genes,” Laroche says.

“Then in 2003, southern Alberta had a stripe rust epidemic. It was a real shock – suddenly stripe rust could develop outside the irrigated lands. The wheat fields were yellowish orange; you could see the disease from the car as you were driving by.

Like the two other wheat rusts – stem rust and leaf rust – stripe rust requires a living host to survive. So conditions on the Prairies are not usually suitable for the pathogen to overwinter. For the most part, the spores are carried by the wind into the Prairies from warmer regions.

Laroche explains, “There are two pathways for the spread of rust in North America. The most important pathway for the western Prairies is the Pacific Pathway where the spores are blown from Mexico to California and then along the coast to Oregon and Washington State. From there, the spores move inland into southern British Columbia and the Lethbridge area, and then into eastern and northern Saskatchewan, and into central Alberta and infrequently in the Peace River area.” As the disease works its way northward on this pathway, the spores cause infection in wheat fields along the way, producing more spores that can be carried further north.

These days on the Prairies, stripe rust levels still tend to be highest in southern Alberta, but severe outbreaks have sometimes occurred in parts of Saskatchewan.

“The small airborne spores can travel at least 1,000 kilometres. Often, they come down with showers or thunderstorms. This is great for the spores because they need high humidity to germinate. If they land on a susceptible wheat plant, the spores will germinate and infect that plant,” he notes.

“The life cycle takes about two weeks. Initially, a few small areas in fields here and there are infected, depending on where the spores landed. But after two or three life cycles, the disease affects large areas.”

Like the other wheat rusts, stripe rust can reproduce sexually and asexually. Sexual reproduction in all three pathogens takes place on alternate host species, not on wheat. For stem and leaf rust, sexual reproduction is responsible for most of genetic variation in the pathogens’ populations. That variation is key to enabling these two pathogens to adapt to changing conditions, such as defeating resistance genes in wheat. Their asexual reproduction processes produce much less variation – each generation is almost the same as the previous generation except for occasional random mutations.

Stripe rust is different. Its alternate host is barberry (which is also stem rust’s alternate host), but that was only determined about a decade ago. Laroche suspects that scientists took over 100 years to identify its alternate host because sexual reproduction may not be as important for this pathogen. Instead, it appears to have an unusually high degree of mutation in its asexual reproduction process, enabling it to overcome control measures such as genetic resistance in wheat. 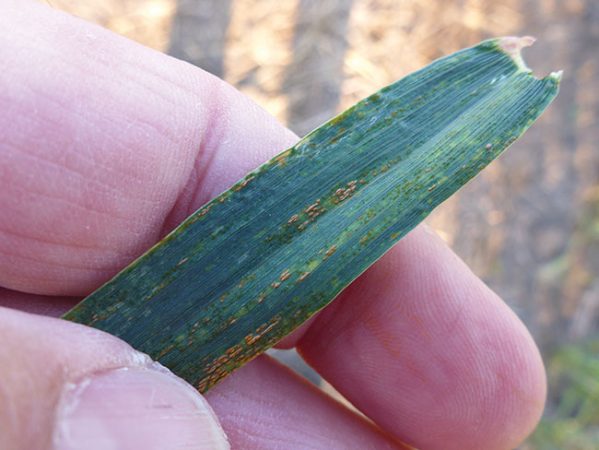 Most western Canadian wheat varieties do not have strong stripe rust resistance and the pathogen is good at defeating resistance genes, so fungicide applications are very important to manage the disease. Photo courtesy of T.K. Turkington.

To track the spread of airborne pathogens for disease forecasting systems, air samples are collected in the field and then analyzed to identify and quantify the pathogens present. These days, this analysis is usually done using PCR, a DNA-based approach. But PCR is difficult to use with stripe rust.

In addition, there is the worry that the stripe rust spores might not be properly broken open, which would reduce the reliability of the forecast. He notes, “From our work over the years, we know that the spores of some stripe rust isolates are more difficult to open than others; we don’t have any theory at this point as to why this is the case. But when you’re collecting samples in the field, you don’t know whether the spores will be a little easier or more difficult to break open. So our protocol is always for the most difficult spores.”

Laroche’s project involved an innovative method to detect and quantify stripe rust spores. This method uses an antibody that reacts to the specific proteins on the surface of the stripe rust spores, so the spores don’t have to be broken open. The Western Grains Research Foundation and Saskatchewan Wheat Commission funded this three-year project, which started in 2015.

Laroche had obtained the antibodies about five years earlier. He collaborated on that work with his AAFC-Lethbridge colleague Claudia Sheedy, who has expertise in antibodies. The antibodies were produced using the techniques involved in making antibodies for medical uses.

To develop the new detection method, Laroche and his research team tested the antibodies on different stripe rust isolates. They used samples from infected plants that they were growing in the greenhouse and from air samples collected in the field. They figured out how to accurately quantify the number of spores based on the colour intensity of the antibody reaction. And they assessed the effectiveness of this antibody approach.

The field samples offered a special challenge. Air sampling equipment for spore collection can capture lots of other airborne things – pollen, insects, dust, dirt and so on, as well as many different species of spores. In particular, Laroche and his team wanted to be sure that their method was robust enough to handle the sometimes large amounts of dirt in these samples.

He says, “We made some minor modifications to our protocol, and we determined that, yes, we can still detect the spores with our antibodies, even when the amount of dirt is in vast excess of the number of spores.”

Why a forecasting system

Laroche’s detection research is an essential first step for forecasting stripe rust. Currently, growers make decisions about fungicide applications by scouting their wheat fields for symptoms, which start to appear about one to two weeks after the spores arrive. A real-time, reliable forecasting system could provide earlier information to growers about whether or not spraying would be warranted.

Since most western Canadian wheat varieties do not have strong resistance to stripe rust and the pathogen is good at overcoming resistance genes, fungicide applications are very important for managing this disease.

“With stripe rust’s ability to mutate in every life cycle, the pathogen is able to adapt and eventually defeat the resistance genes. When a single new resistance gene is released in commercial cultivars, the pathogen will overcome that gene within two or three commercial years. So if you have a plant that is resistant today, it might not be resistant next week or next year.” He adds, “That’s why it is important to bring at least three stripe rust resistance genes together in a wheat variety to help to preserve the effectiveness of these genes.”

The pathogen’s relatively high mutation rate also means it can more easily develop resistance to fungicide chemistries. “This has been experienced in Europe a number of times. Nowadays, only two fungicide groups [Group 3 and Group 11] are effective against stripe rust [in North America],” notes Laroche.

“If you apply a fungicide when it is not really needed, you favour the development of biotypes of the pathogen that have resistance to that fungicide. So the potential danger is: what do you do on the day when you have stripe rust that has become resistant to the remaining two chemistries? You will have lost your last tool to fight the pathogen.”

A reliable forecasting system would enable growers to apply fungicides only when needed. That would help maintain the effectiveness of the current fungicide chemistries as well as reducing stripe rust yield losses, lowering fungicide input costs, and minimizing any environmental impacts from the fungicides.

Western Canadian researchers are currently working on the other components of the stripe rust forecasting system. And they are developing forecasting systems for stem rust, leaf rust, powdery mildew, tan spot and Fusarium head blight.

Laroche is also involved in other stripe rust research. Some of this work is focused on learning more about the pathogen. For instance, he and his research team are examining the genetic differences between different stripe rust isolates. This work confirms that stripe rust populations have a remarkable amount a genetic variation. He says, “This pathogen is very plastic and can change about 2 to 10 per cent of its genes quite rapidly.”

Another area of his research aims to increase understanding of stripe rust resistance and susceptibility mechanisms by examining gene expression. “When we infect a susceptible wheat plant, we see a huge response of the stripe rust genes as they invade the plant and make their reproduction very successful,” he explains.

However, crossing wheat with its wild relatives to bring in resistance genes is a time-consuming, complicated process. So Laroche’s group develops DNA markers that are used to screen for the resistance genes in each generation of the breeder’s plants, making the screening process much faster and more efficient.

Stripe rust presents a formidable threat, with its more aggressive races that are better adapted to warmer temperatures and its ability to defeat control measures. Laroche’s research is contributing to the development of new tools so western Canadian growers can more effectively manage this yield-robbing disease.