With soybean acres on the rise, researchers investigate cover crops, fungicides and more. 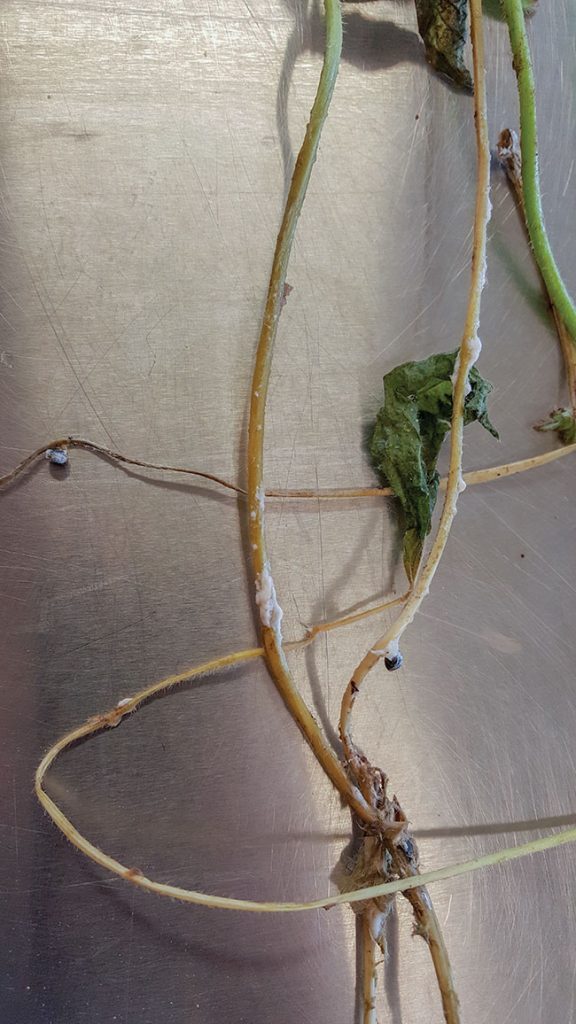 Starting in 2019, Foster will be screening soybean lines from an AAFC breeding program for white mould resistance. Photos courtesy of Adam Foster.

With the increase in soybean acres over the past 15 years in the Maritimes, disease management research is important for advancing soybean production in the region. “With more acreage, I would expect more soybean disease problems to start to be reported because the broader the area where a crop is grown, the more chance there is that some diseases will get a foothold somewhere,” says Adam Foster, a research scientist with Agriculture and Agri-Food Canada (AAFC) in Charlottetown.

Foster, who first came to the Maritimes in the fall of 2015, is a plant pathologist focusing on grain and oilseed crops, including soybeans. He notes, “I’m one of those people who gets incredibly excited about working on organisms that most people probably don’t find exciting and many people find to be a problem. I’m hoping that my enthusiasm and drive will help me find some unique solutions to the disease problems that crop growers have in the region.”

Foster’s soybean research includes an interesting three-year project that could help in developing some of those unique solutions to disease concerns in the crop.

His project grew out of a project led by Aaron Mills, another research scientist at AAFC-Charlottetown. “Aaron partnered with the Atlantic Grains Council to look at the agronomic effects of different cover crops on soybean and barley crops in the following years. I was a member of that project doing some pathology work,” Foster explains. Then an AAFC internal proposal call came along, and Foster took that opportunity to develop a study that builds on Mills’ project.

Foster’s study, which is funded by AAFC and the Atlantic Grains Council, started in 2018. It is assessing cover crop effects on the soil microbial community and on disease occurrence in the following soybean and barley crops.

“For soybean growers, the findings from this research could help in choosing which cover crops to put in their rotation before soybean. Of course, growers choose cover crops for various reasons, including improving soil health and stopping erosion, as well as other factors; for instance, buckwheat and mustard are being heavily promoted in the Maritimes to control wireworms. So the project’s findings could give growers more knowledge about cover crop effects from a microbial perspective and potentially could provide a warning if a particular cover crop species could increase the risk of certain pathogens in their field. That way, the growers could watch out for those pathogens and take steps to control them before they cause serious problems.”

Out of the 25 different cover crop treatments in Mills’ project, Foster selected 12 treatments for his microbial project, mainly because of the high cost of microbial analysis.

The selected treatments are representative of a range of crop types. “Our cover crop treatments include alfalfa, annual ryegrass, brown mustard, buckwheat, clover, oilseed radish, and Sudan grass, and a few combinations of cover crop species such as buckwheat plus clover, and clover, buckwheat and brown mustard mixed together. Also, for comparison, we have a treatment that we call our red soil control. It has no cover crop, and we manually remove any weeds, so we can know what the microbial community would be like if a field was left bare,” Foster says.

He adds, “For a long time, a lot of the cover crop species have been reported to have effects on the soil microbial community. In our project, we are using new tools to understand what is happening more deeply than could be done in the past. We are using a next-generation DNA sequencing approach to try to identify how all of the individuals within the microbiome are being affected by the cover crops.”

In the cover crop year of the rotation, Foster and his project team are collecting soil and crop residue samples and conducting DNA analysis of the microbes in those samples. Then in the field crop year, they are measuring things like the levels of different root diseases, airborne spores and foliar diseases, as well as crop yields and quality factors.

Foster is intrigued by this opportunity to take a closer look at the pathogens within the soil microbiomes of the different cover crops. “Many of these crops could be alternate hosts for some of the pathogens that affect our crops in the next year. So it will be really interesting to see, for example, if perhaps a cover crop that is a potential host for a pathogen actually isn’t benefitting that pathogen and has a way to control it. And that might not be direct control by the plant itself; the plant might be promoting something else [in the soil that suppresses or kills the pathogen]. But until we get some results, it is just an exciting guessing game.”

Last year, Foster completed a four-year soybean project to examine the effects of foliar fungicides and seed treatments to control disease across a range of different cultivars. AAFC and the Atlantic Grains Council funded this project, which was started in 2014 by Richard Martin, Foster’s predecessor at AAFC-Charlottetown.

The foliar fungicide trials evaluated seven commercially available products for their effects on soybean disease and yields, compared to an untreated control. “In all the years of this project, the foliar disease pressure at the field site was lower than average, primarily because there was a lot less rainfall than usual,” Foster notes. “So none of the foliar fungicides had a significant effect because there was very little foliar disease to control.”

The seed treatment trials tested eight commercially available products as well as a mix of two of the products, Cruiser Maxx Beans plus Dynasty. The pressure from soil-borne diseases was low in all four years of these trials.

“Even though there was very little disease, some of the seed treatments did actually produce a small but consistent boost in soybean yield [compared to the untreated control], across the different cultivars and over the years of the study,” he says.

“We also had a control plot with the insecticide by itself. The insecticide on its own didn’t have any particular effect on yield,” he notes. “So the yield benefit from combining Cruiser Maxx Beans and Dynasty suggests that the ability to control lots of different organisms simultaneously might give a better overall benefit for the soybean crop.” 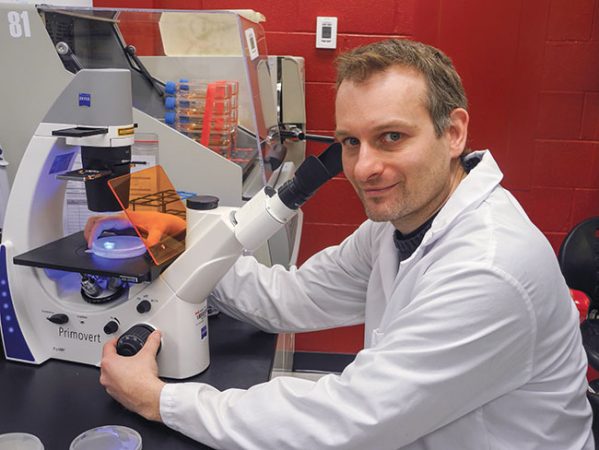 Adam Foster’s research at AAFC-Charlottetown involves work on diseases in grain and oilseed crops, including soybean.

The cultivar-specific trials compared four soybean cultivars to see whether they would have different responses to the seed treatments. Foster says, “The treatments performed pretty much identically on all the different cultivars. That is good news because you wouldn’t want to have a cultivar that didn’t respond to a particular seed treatment.”

Overall, Foster emphasizes that the foliar and seed treatment fungicide products might have produced stronger yield effects if the disease pressure had been higher during the project.

In 2018, Foster started a new soybean project, running until 2023, with the Atlantic Grains Council. This project is examining if seed treatments affect optimal planting density, and it is repeating some of the foliar fungicide work from the 2014-2018 project but with enhanced disease pressure.

And in 2019, Foster will be starting collaborative work with Elroy Cober, AAFC’s soybean breeder based in Ottawa. Foster says, “I’ll be screening for white mould resistance in some of his elite lines that he is planning to release in the near future.” The screening results will provide Cober with more data on the performance of these lines, helping him with things like deciding which of the lines will go into variety registration trials.

Foster’s main advice to growers for disease management in soybean is to be vigilant about scouting for disease problems.

“If you identify disease problems early enough and you work with your provincial extension staff or your local extension services groups, you could solve the problems before they have major impacts. That is not true for every disease, of course, and sometimes you won’t notice the disease until it is too late to control. But monitoring and scouting fields is the best way to keep an eye on what is going on in your crop.”

He suggests that growers watch for existing disease issues and also for symptoms that might indicate new disease risks.

“[For instance,] I think soybean growers should be on the lookout for the soybean cyst nematode. To my knowledge, this pest hasn’t been reported in Atlantic Canada, but it is a major problem in Ontario.” This nematode has been spreading through Ontario’s soybean growing area since it was first found in southwestern Ontario in 1988. It has already spread as far eastward as western Quebec, where it was reported in 2014. To watch for this nematode, growers can check yellowed, stunted and dead soybean plants to see if the roots have any tiny cysts on them. If they suspect the disease, they can send the root samples to a lab for diagnosis.

Although soybean diseases may become more troublesome in the coming years in the Maritimes, ongoing efforts by growers, extension agents and researchers like Foster will help reduce disease impacts.