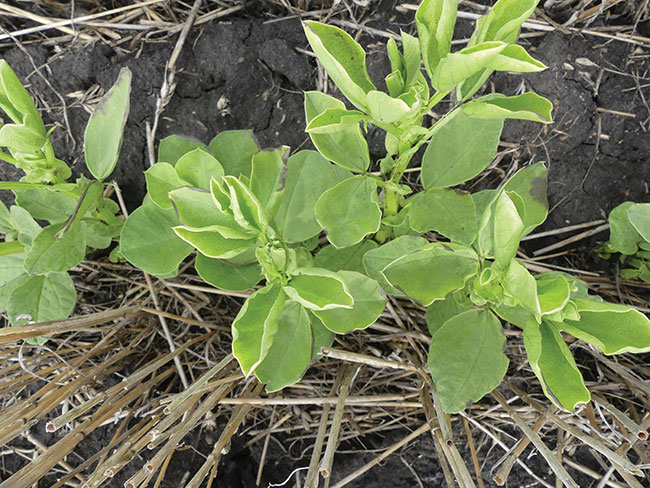 When Alberta’s fababean acreage leapt from about 8,000 acres in 2012 to 110,000 acres in 2015, Alberta Agriculture and Forestry (AF) researchers started to get a lot more questions about fababean agronomy. With so many new growers trying different products and practices in different growing conditions, many of the questions were about situations that AF had not encountered before.

“We hadn’t done research on fababeans since the 1980s and early 1990s, so when growers called, we had to say, ‘We don’t have any research to back this up, but this is what we think,’” notes Robyne Bowness, AF pulse research scientist.

The Alberta Pulse Growers funded all four of the project’s studies, and the Alberta Crop Industry Development Fund (ACIDF) provided funding for the herbicide residue study. As well, the project had in-kind donations from the herbicide, fungicide, fertilizer and seed companies.

The wheat herbicide trials arose from producer calls about suspected herbicide damage. Bowness says, “When we looked at farmers’ fababean fields and asked about the preceding crop and the herbicides used in it, we identified three products used in wheat that we thought might be causing some problems in fababeans: Prestige (clopyralid), Infinity (pyrasulfotole plus bromoxynil) and Everest (flucarbazone).”

So in 2016, Bowness and her research team planted wheat plots and applied the different herbicide treatments. Each product was sprayed at its recommended label rate and at a double rate to represent situations where problems like overlap occurred. Then in 2017, they grew fababeans and evaluated the herbicide impacts.

Bowness and her team compared four burndown products: CleanStart (carfentrazone plus glyphosate), Heat (saflufenacil), Express SG (tribenuron-methyl) mixed with Roundup (glyphosate), and Express SG with 2,4-D. For each of these, the following treatments were used: the normal label rate and the proper timing; twice the label rate but the proper timing; the normal rate but applied five days late; and twice the label rate and applied five days late. Then they evaluated the effects on the fababean crop.

The results depended in part on the trial location. “At Falher and St. Albert, we didn’t see any negative effects of any of the wheat herbicides applied the year before or any of the pre-seed burndown products applied in the year of fababean,” she notes. “That finding indicates to us that, with their higher organic matter and good moisture, these soils were able to tolerate the higher herbicide levels, and the fababeans were able to grow through any negative effect that they may have encountered early on.”

“At Lacombe and Lethbridge, if the Express SG burndown treatments were applied at the label rate and the proper pre-seeding timing, we didn’t see much of an issue, except maybe a little yellow flash, wilting or crinkling of leaves,” she says. “But if we were applying double rates or spraying it later than recommended, we definitely saw some yellowing, curling and stunting at both sites.”

Her recommendations from the herbicide residue study are: “Be careful with your wheat herbicides because they could cause problems in fababeans particularly in a drier year. And apply your pre-seed burndown products properly, especially Express SG because of its residual effect in the soil.” 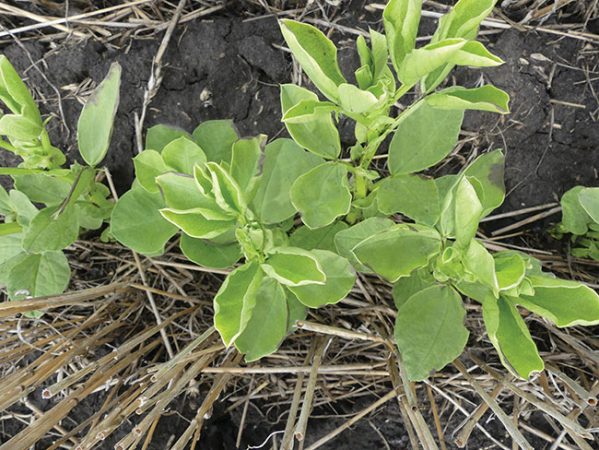 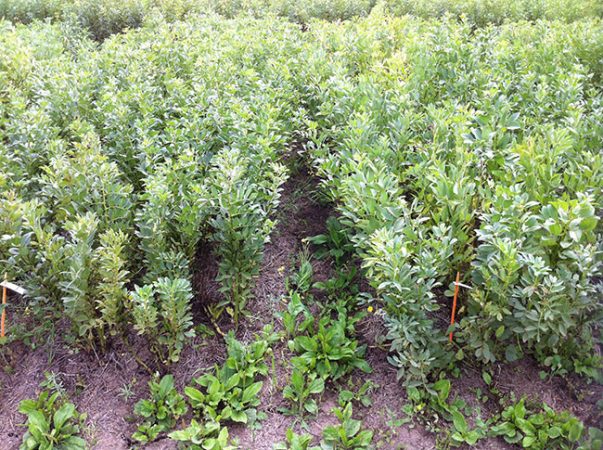 At the time, few fungicides for fababean had chocolate spot on their labels. “These six products were registered on other pulses like chickpeas, peas, and lentils, but not necessarily on fababeans. We chose these six because they are popular fungicides and because some of them have proven activity on Sclerotinia in other crops. Sclerotinia and Botrytis are very similar pathogens,” Bowness says.

She adds, “Headline doesn’t have any activity on Sclerotinia but it is effective on another fababean pathogen, Ascochyta. We were anticipating Ascochyta to show up in fababeans because we have a problem with this disease in other pulse crops including chickpeas, lentils and field peas. So we included Headline to see if we could get a handle on Ascochyta if it showed up.”

Overall, the study showed some benefit to applying fungicides, but results varied across locations and no particular fungicide necessarily worked better than another.

However, Bowness doesn’t have a lot of confidence in the strength of these results because the plots had very little disease in 2016 and 2017 due to the dry conditions, even though they inoculated the plots with the pathogen. The trials had a little more disease this past year, but she hasn’t finished analyzing the 2018 data.

Bowness’s recommendation on fungicides for fababeans is: “Like any other crop, if it is a wet year and you’re seeing a lot of disease, then fungicides might be a good tool. But I can’t say for sure that fungicides are a must. It would depend on the farm and the situation.” 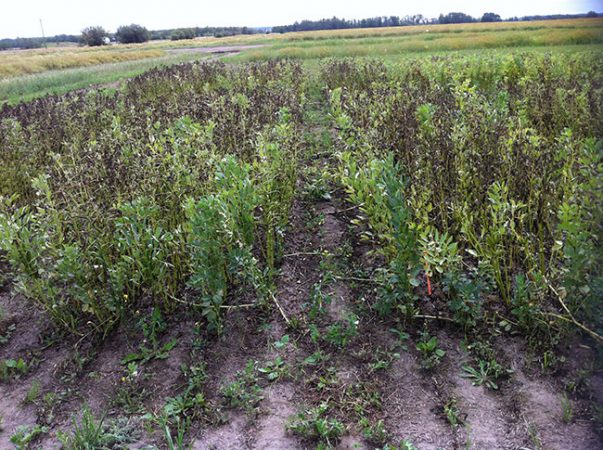 Trials comparing fababean without fungicides show these products could be good tools in a wet year with a lot of disease. 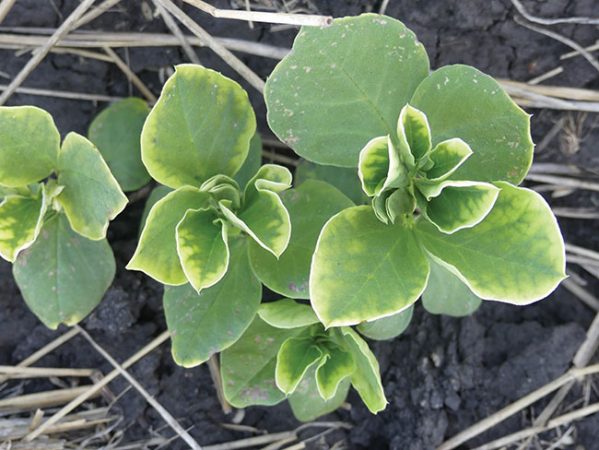 These effects of Infinity at a double rate show the need to be careful with wheat herbicides because they may cause problems in the following fababean crop, particularly in a drier year.

What are the best practices for desiccation?
Typically in Alberta’s fababean growing area, frost tends to move in around the second week of September. If fababeans are hit with a killing frost, the yield losses can potentially be significant. Bowness says, “Before we did the desiccant study, our message had been: when you see about 80 to 90 per cent of your pods starting to turn black, the leaves have fallen off, it is the second week of September and frost is imminent, then apply Reglone (diquat) at a high rate because you need to shut those plants down.”

The project’s desiccant study was sparked by Alberta’s late spring and really early fall frost in 2016 – a very challenging combination for fababeans, which need a fairly long growing season. “So we had a lot of questions from growers such as: What’s the best desiccant to use on fababeans and when should we put it on? Is 80 to 90 per cent black pods really the best time to apply it? How much yield do you lose if you apply a bit earlier than that?” she says.

“Of course, farmers really want to use Roundup as a desiccant so they can kill their perennial weeds and desiccate the crop at the same time. But with pulse crops, we have always said you should not use glyphosate as a desiccant.”

The study looked at both Reglone and Roundup and showed that Reglone was definitely the best choice. Reglone can dry down fababean within five days. The study’s results also showed that Reglone could be applied at about 75 per cent pod change, a little earlier than previously recommended, and still get good results with fairly minimal yield losses.

In most years, glyphosate is not a good choice for a fababean desiccant. “Usually we are trying to get fababeans to turn in the middle of September, and glyphosate simply takes too long,” Bowness explains. “Glyphosate takes three weeks to dry a fababean crop down under good conditions. If a frost comes before those three weeks are up, you could have yield loss.”

She adds, “In 2018, our fababeans sat in the snow for six weeks before we were able to get them off. We sprayed Reglone before the snow came on Sept. 10. They stood very well through the snow. And when the snow went away, we took the fababeans off and they were great quality. Had we sprayed glyphosate, we wouldn’t have had a crop.”

In a very dry year, glyphosate could be an option. “For example in 2015, it was extremely dry and the fababeans were naturally drying down on their own by the end of August. In that case, you could apply glyphosate because you have a window to wait for the crop to dry down,” Bowness says.

Her updated desiccant recommendation is: “Apply Reglone at about 75 to 80 per cent pod change. If frost is coming, spray Reglone three to five days before a killing frost. For fababeans, a killing frost is -4 C for more than four hours.”

Do micronutrients make a difference?
AF conducted micronutrient research on fababeans in the 1980s and didn’t find significant benefits from these fertilizers. Bowness decided to take another look because growers were asking questions based on what they had been hearing in recent years about micronutrients in other crops.

Bowness and her team decided to look at both macronutrients and micronutrients. The macronutrients in the study were phosphorus, potassium and sulphur. Nitrogen wasn’t included because it isn’t applied on pulse crops. They also chose to look at boron, molybdenum and manganese because AF’s previous research indicated fababeans might respond to these micronutrients. She says, “We thought boron might help with flowering, and molybdenum and manganese might help with root development, growth and overall development of the fababean crop.”

The results were in line with the findings from AF’s previous research.

“We confirmed that phosphorus is extremely important. If you don’t have enough phosphorus, no pulse crop is going to do well,” Bowness says.

“We also didn’t see any response to any of boron, molybdenum or manganese.”

Her nutrient recommendations are: “Definitely make sure that your phosphorus levels are high enough, and that you’re not limited in potassium or sulphur. Although our research didn’t show a benefit to the micronutrients, if you are concerned and you have a soil test that has suggested these micronutrients would be beneficial, then trust the test results and the soil lab’s recommendations.”

Better information, hard numbers
The results from this project provide new information that researchers, extension agents and growers didn’t have before. Now, when producers call with questions, Bowness and others have some real numbers about the different practices. And that will allow growers to make more informed decisions about managing their fababean crops.

“Now, if a producer says, ‘I hear a frost is coming in a few days on Sept. 15. My fababeans are still really green. What should I do?’ I can say, ‘I have some research that suggests if you go in with Reglone today or tomorrow before the frost hits, you can expect about a five to 10 per cent yield reduction. This is because your crops are still so green and you’re shutting them down. But if you wait, your yield loss will be higher, perhaps 30 per cent,” Bowness notes.

“And I can say, ‘There is a significant difference in a wetter year if you put fungicides on your fababeans during flowering, but in a drier year they are likely not necessary, and here are the numbers to prove it.’ So instead of just doing the best we can to make recommendations to producers based on what we’ve seen in other crops, we now have some actual research across the whole province.”

Bowness also offers one overall recommendation: no matter what practice you’re thinking of trying on your crop, be sure to leave a check strip.

“These are research trials; they are highly managed. Because we take all of the other factors out, we can show if a practice results in differences or not. But farmers are dealing with a number of factors, and none of these agronomic recommendations are going to be exactly the same for every single farmer across the entire province. So leave a test strip and then you’ll know.”