Fababeans adapt well to cooler, wetter regions in Saskatchewan, and are proving to be a good option for growers who have been dealing with excess moisture and are looking for an alternative pulse option. 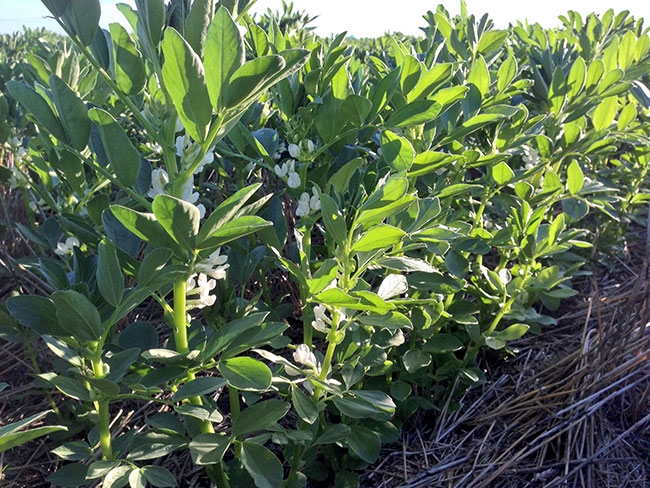 Fababean in flower in field plots at the end of June 2016. Fababeans adapt well to cooler

Fababeans have the ability to withstand prolonged wet periods much better than field peas and lentils, and also have a high yield potential and resistance to root diseases. However, fababeans are also large users of phosphorus (P), something that needs to be considered in long-term nutrient management plans.

“Although fababeans are known to be relatively large users of P fertilizer, current recommendations for seed-placed P are still relatively conservative,” says Chris Holzapfel, research manager at the Indian Head Agricultural Research Foundation (IHARF) in Indian Head, Sask. “Fababean is generally considered to be sensitive to seed-placed fertilizer and therefore it is not recommended that more than 22 pounds per acre [lbs/ac], or 25 kilograms per hectare (kg/ha), of phosphorous pentoxide, P2O5, be applied when using narrow openers as most modern no-till drills do. Therefore, we set up two similar demonstration trials in 2015 and 2016 to compare the application of various rates of P fertilizer on fababean establishment and seed yield for both side-banded and seedrow placement. In addition to measuring the yield response to P fertilization, we also wanted to assess the sensitivity of fababean to seed-placed P fertilizer when seeded into clay soils using a hoe drill with low seedbed utilization.”

In the demonstration trials, Snowbird fababeans were directly seeded into spring wheat stubble using a SeedMaster hoe drill on a 12-inch spacing. The replicated trials included two placement methods, seed-placed and side-banded, at various rates of monoammonium phosphate (11-52-0) and an unfertilized control. In 2016 the trials compared P rates of zero, 18, 36, 53 and 71 lb/ac of  P2O5, with similar protocols in 2015. The effects on emergence and seed yield under the different placement methods and rates were compared.

“The project demonstrated that fababeans are responsive to high rates of P fertilizer in low P soils, and even respond to rates that are higher than those typically used by most producers,” Holzapfel says. “A relatively strong yield response to high rates of P fertilizer was observed in both years. In 2016, the highest yields occurred at the highest P application rate of 71 lb/ac of P2O5 (80 kg/ha), where the observed yields were 15 per cent higher than the control plots. There was little impact on yield at lower P rates. In 2015, fababean yields were increased by 20 per cent at 45 lb/ac of P2O5 (50 kg/ha) but there was little impact on yield at the lower rate of 22 lb/ac P2O5 (25 kg/ha). Phosphorus effects on seed size were measured but were small and inconsistent over the two years of the project.”

Overall, the project did not demonstrate any impact on emergence or seedling injury regardless of fertilizer placement method or rate. There was also no evidence of seedling damage in any of the trials, even at the high rates of seed-placed fertilizer under the field conditions at Indian Head.

“Although we did not see any seedling toxicity at higher seed-placed P rates in fababean or other sensitive crops like canola and soybean in similar trials over the past few years, extreme caution is recommended if considering seed-placing fertilizer at rates exceeding the traditionally recommended limits,” Holzapfel says. “Potential seedling injury is a complex issue that can potentially be affected by many different factors including opener type (i.e. hoe versus disc), seedbed utilization, soil texture, pH, seeding depth, crop rotation/tillage system, and of course, weather.”

“Therefore, growers achieving high yields with fababeans need to be aware that they are also removing large amounts of P from their fields,” Holzapfel says. “However, at these high removal rates, it may not be practical to match removal or build soil P with synthetic fertilizers in the fababean crop year.”

Growers need to develop a long-term strategy for managing P requirements and removal rates to ensure optimal yields and maintaining soil health. There are many different factors and individual logistics that will play a role in fertilizer management decisions.

Holzapfel adds, “There are also practical considerations of moving from high fertilizer application rates in our demonstration plot trials and the implications of implementing these strategies using large field-scale seeding equipment and air delivery systems. And most importantly, growers must use extreme caution if considering seed-placing fertilizer at rates exceeding the traditionally recommended limits.

“While the results we have seen to date are certainly compelling, there are simply too many variables to consider before making any broad recommendations regarding seed safety. With heavy clay soils, moderately high organic matter and generally good spring moisture conditions, the risk of seedling injury has likely been lower at our location at Indian Head than it would be on fields with coarser soils or less favourable seeding conditions.”