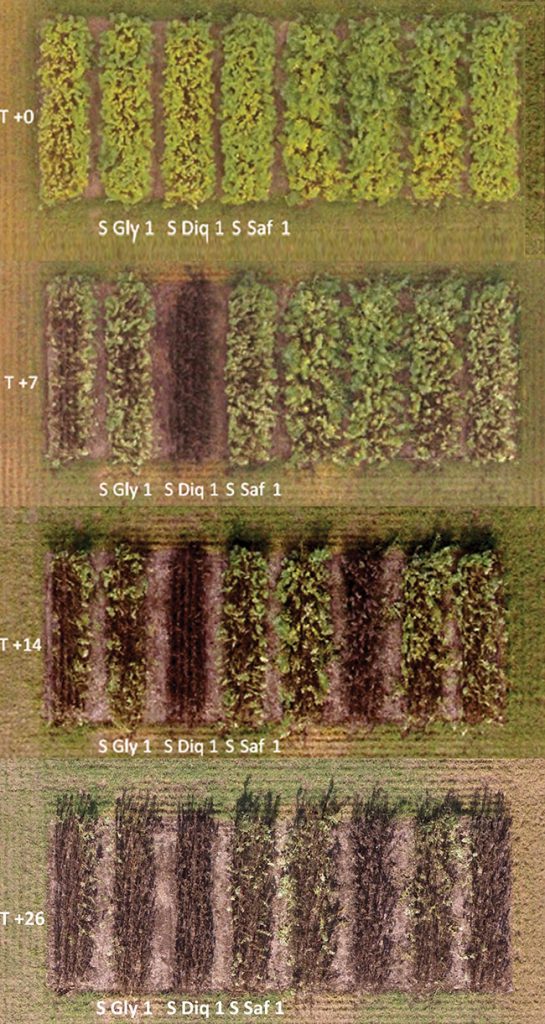 Glyphosate, saflufenacil and diquat plots at time of spray (T+0), and seven, 14 and 26 days after spraying. Photo courtesy of Mason Jackson.

A desiccant is useful for speeding harvest timing of a long-season crop like fababean. But accurate application timing is critical to ensure uniform seed quality and maturity. Go too early and risk poor seed fill. Go too late and crop drydown isn’t achieved without the possibility of reduced yield and quality from frost and pod shattering.

“With contact desiccants, you have to be careful to hit correct timing,” says Mason Jackson, pulse crop technologist with Alberta Agriculture and Forestry in Edmonton. “Our research saw a yield loss when applying diquat too early.”

“With contact desiccants, you have to be careful to hit correct timing. Our research saw a yield loss when applying diquat too early.”

An important consideration is the mode of action. Diquat is a contact herbicide that quickly desiccates the crop and weeds. Application timing for diquat is when most plants are ripe and dry. Pods are fully filled, and bottom pods are tan or black in colour.

Glyphosate moves throughout the crop and weeds, resulting in slower drydown than a contact desiccant. It has a minor use registration on fababean for pre-harvest weed control and should be applied when grain moisture is less than 30 per cent. At this stage, stems are green to brown in colour, pods are mature (yellow to brown in colour), and 80 to 90 per cent leaf drop (original leaves) has occurred.

Despite being registered on other crops, saflufenacil is not registered on fababean as a harvest aid. Its mode of action is a combination of contact with some translocation and it works faster than glyphosate but slower than diquat.

Photos taken on the day of application, seven and 14 days later show that seven days after diquat application the fababeans were dried down completely. Even after 14 days, glyphosate and saflufenacil still had green plant material. When the herbicides were applied very early, yield was significantly lower than the other treatments, ranging from 10 to 22 bushels per acre less on yields of up to 146 bushels per acre. Thousand seed weight (TSW) were also lower with early applications.

Differences in mode of action showed in results. Diquat had significantly lower yield and TSW than glyphosate and saflufenacil. However, the lower diquat yields are indicative of early application timings when diquat prevented complete seed fill. With the other slower acting herbicides, seed fill was complete so yield loss didn’t occur.

Choice comes down to intended purpose.

Choice comes down to intended purpose. Applied at the correct timing, Diquat will quickly drydown the crop to speed harvest timing, and can help get the crop into the bin sooner with better yield and quality. Glyphosate is used for pre-harvest weed control, with a secondary benefit as a harvest aid that more slowly dries down weeds and crop. Accurate timing will also minimize market access issues.