Research found no connection between seeding rate and fungicide response. 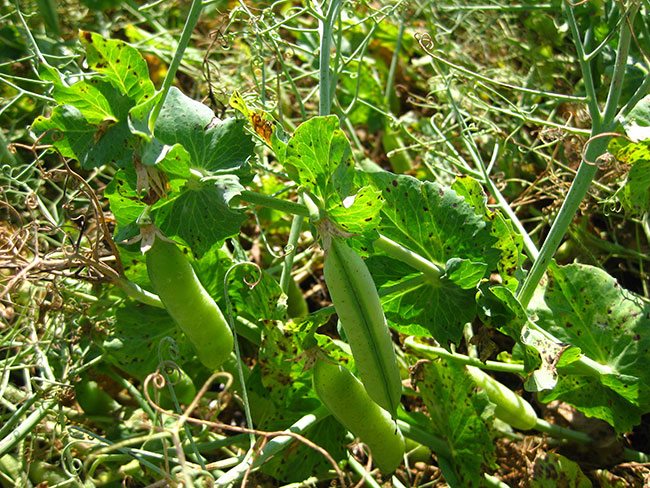 To help develop control recommendations for the Ascochyta complex in Manitoba, where field pea production has lagged behind Saskatchewan and Alberta, a combination of small-plot and On-Farm Network trials were conducted by the Manitoba Pulse and Soybean Growers (MPSG).

“What we found was that environmental conditions were definitely the driver for a yield response with foliar fungicide applications,” says Greg Bartley, On-Farm Specialist with MPSG in Carman, Man. “We had a wide range of growing conditions from 2015 through 2018, and years with high rainfall often meant high disease pressure.”

The research looked at seeding rate and foliar fungicide application impacts on yield. The current Manitoba Agriculture seeding rate recommendation is to target 70 to 80 live plants per square metre (seven to eight per square foot). Some growers may increase seeding rate to improve weed competition or overcome root rot pressure on fields at high risk. Increasing seeding rate, however, may increase the risk of disease because of the denser plant stand.

At the three site years of small plot research, the optimum plant population that reached 95 per cent of maximum yield was between 74 and 96 plants per square metre. This was similar to the current Manitoba recommendation.

“One thing to keep in mind is the yield potential and disease pressure between the two years. 2015 was an excellent year for peas with high yield potential and minimal disease. One fungicide application under these conditions was sufficient. In 2016, a very challenging year for field peas due to high rainfall and high disease pressure, two applications of fungicide was always beneficial,” Bartley says.

For 2018, Bartley says there was a yield response to fungicide at one out of five sites. He says yield potential was okay in certain areas but the lack of moisture reduced disease pressure for the most part.

What the small plot and On-Farm Network trials highlight is that environmental conditions impact disease development and the likelihood of a yield response to foliar fungicide application. To help guide the fungicide application process, Saskatchewan Pulse Growers has posted a fungicide decision support checklist on their website to help determine the risk associated with Ascochyta and Mycosphaerella blight in field pea. The crop is assessed at no later than the 10-node stage or 10 per cent flowering.

The checklist takes into consideration the crop canopy, leaf wetness/humidity, weather forecast and current visual disease symptoms. Farmers can use this checklist to help make spray decisions, or at least reference the checklist to think about the factors that influence disease development and the risk potential.

“Because Mycosphaerella blight is so weather-dependent, a yield response to foliar fungicide application really depends on environmental conditions and your risk tolerance. We will continue to explore this topic to refine recommendations in the future,” Bartley says.