Researchers are evaluating conditions and risk factors to help growers with disease management. 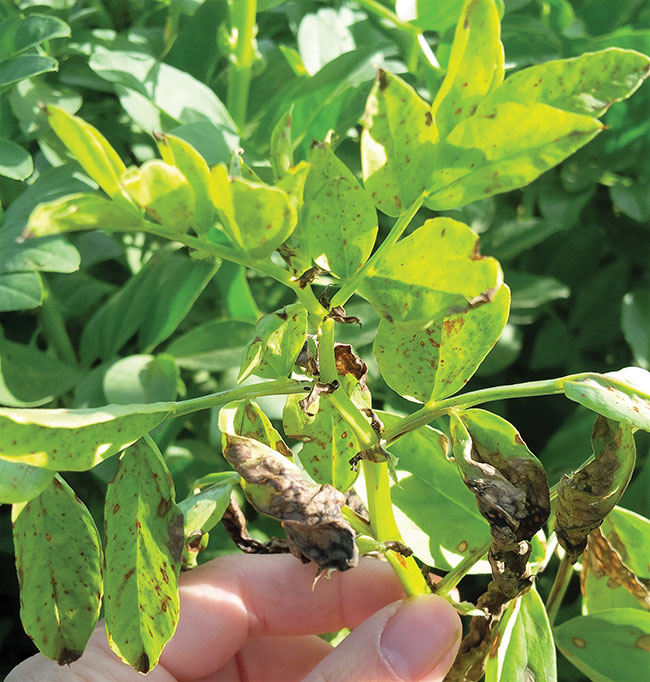 Chocolate spot is one of the most important diseases of fababean, affecting its productivity in Alberta and Saskatchewan. Researchers are evaluating conditions for chocolate spot disease development under prairie conditions to help growers with disease management.

“We have a four-year multi-focused project on chocolate spot disease underway targeting three main areas,” explains Syama Chatterton, plant pathologist with Agriculture and Agri-Food Canada in Lethbridge, Alta. “One of the first priorities is to define how much chocolate spot disease there is in Alberta and Saskatchewan, and to determine if it is really a disease to be worried about. We are addressing this through field surveys, and pathogen identification and diagnostics of diseased samples from the surveys. We are also trying to identify the risk factors and environmental conditions in the field that are leading to chocolate spot development. Finally, we are taking what we learn from the field environment as the main drivers of disease, and then validating those under greenhouse and various environmental conditions to develop a forecasting model for chocolate spot disease risk.”

Chocolate spot disease on fababean is caused by two different pathogens, the more aggressive and specific to fababean Botrytis fabae, and Botrytis cinerea, a less aggressive pathogen that can also affect lentils and other pulses. Along with Botrytis, other pathogens can often be found at the same time in the field, including Alternaria sp, Fusarisum sp and Stemphylium sp. With Botrytis, the symptoms of B. cinerea are usually pinpoint lesions that never spread, whereas large spreading lesions caused by B. fabae are more of a concern. Spreading lesions caused by Botrytis are usually also colonized by the pathogen Alternaria sp.

In 2015, researchers initiated field surveys and began isolating pathogens, which has continued over the past three years. Field surveys are expected to continue in the future. Although field conditions were fairly hot and dry over the past couple of years, the disease has still been present every year, with higher levels measured in 2016 than 2015. “Even under these conditions, we measured some sort of foliar disease and leaf spots in 100 percent of the fields,” Chatterton says. “However, the severity has been pretty low, typically between five and 10 per cent coverage on the whole plant. Although overall the severity was quite low, there were a few wetter pockets in southern Alberta and near Saskatoon where the severity was higher and up to 100 per cent in a few fields. Defoliation begins once the fungus covers the entire plant and severity reaches higher levels.”

During the field surveys, 1,310 fungi were isolated from the fababean seeds collected in 2015 and 883 in 2016. Along with Botrytis sp., the different isolates were grouped into three main groups of fungal genera, Alternaria sp., Fusarium sp., Stemphylium sp., and other saprophytes. Testing showed that the Alternaria sp., Fusarium sp. and Stemphylium sp. isolates rated weak to moderately pathogenic on fababeans, while Botrytis sp. rated moderate to highly pathogenic. Insect pests were also collected and identified in the field surveys. 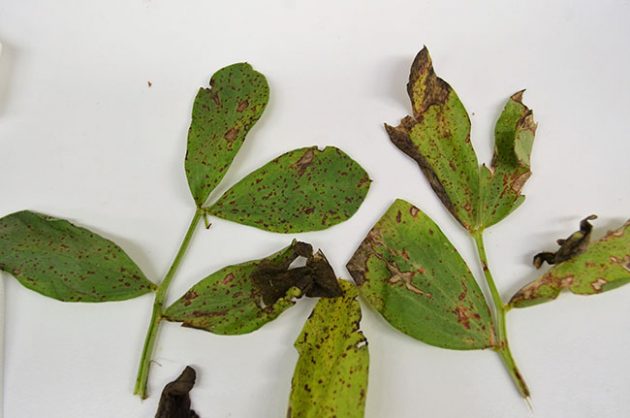 “Another pest that is a problem in fababean is lygus bug, which we were concerned may be helping the Botrytis pathogen,” Chatterton explains. “However, in another project, we found that chocolate spot was typically seen on pods in the lower crop canopy, while lygus bug feeding was typically on the higher pods. In that project, the main seed damage occurred primarily in the top portion of the crop from lygus bug feeding and not chocolate spot. When we tested the damaged seed, we did find the Botrytis. However, we think that the lygus bug creates an entry wound and allows the pathogen to enter the pod. The damage, though, seems to be related to the lygus bug feeding.” 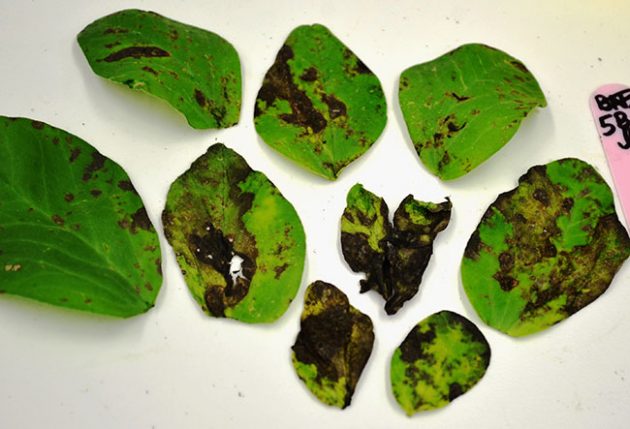 In the second part of the project, the objective was to determine the duration of inoculum discharge and infectious periods of B. fabae under field conditions. Researchers developed a more unique strategy of using trap plants to try to determine what the exposure period of the disease is and when crops are most likely to be infected by the disease. A total of 16 trap periods from mid-June to mid-August were assessed in 2017 at three locations in Alberta (two in Lethbridge and one in Lacombe) and three locations in Saskatchewan (Saskatoon, Melfort and Scott).

“We grew fababean plants in the greenhouse, moved them into the field for three or four days and then returned them back to the greenhouse under conditions conducive to disease development to understand the chocolate spot disease risk periods in fababean,” Chatterton adds. “The plants were incubated in the greenhouse and chocolate spot severity was rated after 14 days. We developed this strategy because of the dry conditions and to help us better correlate when spores are being released and the exposure period to disease development with environmental conditions. Our trials worked surprisingly well, as we had good disease expression in the greenhouse, which confirms that there are still spores being released under dry conditions, and once moisture becomes available, the pathogen can infect.”

Early observations show that average temperature, dew point temperature, and time periods when temperature ranged between 15 and 25 C significantly affected chocolate spot disease severity. Chatterton notes that the real driver of the disease seems to be the leaf wetness time. During the growing season, when there are heavy dew conditions and more than four hours of continuous wetness, the disease is more prevalent. “We are trying to pull all of this information from the field data to help identify parameters we need to test under controlled environmental conditions to build a forecasting model. Leaf wetness and different time exposures to humidity under controlled conditions will help us determine the parameters for infection.”

She adds, “There are a lot of things going on in this project, but we expect to have a better understanding of the disease, risk factors and ultimately a forecasting model for disease risk to assist growers with economic management decisions by the end of the project. In the meantime, there are a few practices that growers can use to minimize chocolate spot disease risk in their fields. Because B. fabae is the more aggressive pathogen specific to fababean, then a crop rotation of three or four years is something that can help manage the disease and keep B. fabae levels low. Growers should also test seed for seedborne pathogens and ensure only high-quality, disease-free seed is planted. When required, fungicides can be applied a bit later in the season during flowering or just past flowering, similar to an application for diseases like sclerotinia.” 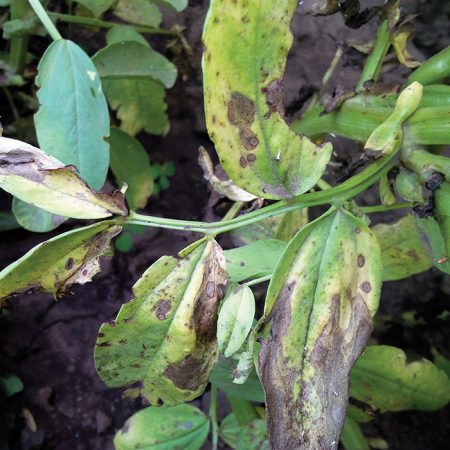 This project continues through 2019, which will include data analysis from all of the field surveys, field plot trials and lab experiments. Further field trapping experiments will be conducted in Alberta and Saskatchewan to estimate the disease risk periods. Researchers expect that the results will provide an understanding of the dynamics of chocolate spot disease epidemics in time and space and its management. The various parameters will also assist with the development of a forecasting model for disease incidence and assist growers with making spray application and economic disease management decisions. Final project information is expected to be available in spring 2020. Funding for the project includes matching funding from the Saskatchewan Ministry of Agriculture, Saskatchewan Pulse Growers, Alberta Pulse Growers and Western Grains Research Foundation.