“There were some gaps in knowledge that we wanted to fill in. The research gave us some interesting results and, in some cases, surprises,” Bowness Davidson says.

The research project began in 2016 and ran for three years. Trials were established looking at herbicide residues, fungicide use and nutrient management. Additional funding was secured to carry on the herbicide and fungicide trials in 2019 and 2020. Trial locations included Falher, Edmonton (St. Albert), Lacombe and an irrigated Lethbridge site.

Herbicide trials looked at carry-over risk
The herbicide study included two components. The first was application of three cereal herbicides, Infinity, Prestige and Everest, on wheat in the year prior to fababean. The herbicides were applied at label rate, plus twice the label rate and, for some products, three times the rate. None of the herbicides have fababean as a re-crop the year following applications, so the research team wanted to see if crop emergence, plant height, flowering, maturity and yield would be affected.

Bowness Davidson says the significantly lower yields with Infinity and double rates of Everest and Prestige were unexpected, since the fababean plants did not show any signs of reduction in plant stand, height, flowering or leaf discoloration.

In general, Bowness Davidson says that growing fababean after Infinity, Everest, and Prestige has the risk of leaf damage and lower yield, especially under dry conditions. The research showed that fababean can sometimes grow through initial herbicide residue injury, but can also have reduced yield even if crop injury was not observed.

“The challenge with fababean is that, because it has traditionally been a smaller acreage crop, there hasn’t always been a lot of recropping research done. As far as recropping goes, fababeans are pretty wimpy at the seedling stage. If you can’t grow pea or lentil after a residual herbicide, I would be careful about growing fababeans,” Bowness Davidson says.

The second component looked at four preseed burndown herbicides applied prior to seeding, or five days after seeding at label rate and twice the label rate. The herbicides were Cleanstart (registered), Heat (not registered), Express SG (registered with caution on sandy and low organic matter soils) plus glyphosate, and Express SG plus 2,4-D.

At Falher, Lacombe and St. Albert, plant stand was not significantly affected. However, at Lethbridge, Express SG plus 2,4-D had a negative impact on stand establishment when applied according to label directions. But when Express SG plus 2,4-D was applied five days after seeding, damage was much less severe. That was a surprise.

“After the first year I jokingly said the plots must have been mislabeled. But when it happened again, we knew something was going on,” Bowness Davidson says. “I talked to a few weed scientists and nobody could really come up with a reason.”

Visually, Bowness Davidson says that Express SG plus 2,4-D, in general, showed more injury at the seedling stage. The seedling injury increased at twice the label rate, which can occur with sprayer overlaps. At Lethbridge, consistent with the plant stand reduction, plant height was significantly reduced when Express SG plus 2,4-D was applied according to label directions.

Yield was not impacted by the pre-seed herbicides at the Falher or St. Albert locations. At Lacombe, preseed herbicide application done according to label rates did not significantly lower yield, but higher rates or application after seeding reduced yield. At Lethbridge, Express SG, especially when tank-mixed with 2,4-D, had significantly lower yields of between 32 and 56 per cent when applied at label rate and at recommended preseed timing.

Bowness Davidson says the results suggest that Express SG should not be used in the Lethbridge soil zone because of the damage observed when it was applied according to label directions. At Lacombe, some visual damage was observed, and she cautions to use Express SG carefully. At St. Albert and Falher, where moisture conditions were favourable, Express SG was safe on the crop, but under dry conditions or low soil organic matter, caution is recommended. 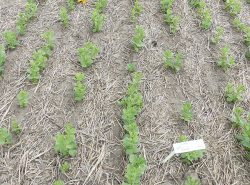 Express SG applied at Lethbridge at label rate after seeding. 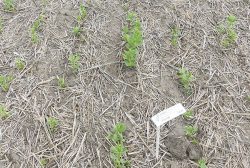 Fungicide application reduced disease pressure
Six fungicides were applied at early signs of chocolate spot disease or at mid-flower at recommended label rates. The fungicides applied were Lance, Acapela, Vertisan, Priaxor, Headline and Delaro. Overall, disease levels were low during the three years of 2016, 2017 and 2018 because of the hot, dry weather. Chocolate spot averaged 1.5 to 3 out of 7 on the disease rating scale of 1 (no disease) to 7 (death of the plant).

Generally, all the fungicides lowered the disease ratings compared to the control plots. There was a trend of higher yield with fungicide application, but it was not significant.

The fungicide trial was carried forward into 2019 and will be completed in 2020. In 2019, Bowness Davidson says chocolate spot pressure was high because of the late summer and fall moisture conditions. Again, the fungicides worked well, and did increase yield, but she hasn’t had a chance to run the statistics.

“I can definitely say the fungicides worked in 2019, and worked well, but I haven’t determined if they would have provided an economic return,” Bowness Davidson says.

Nutrient management
The nutrient trials had three components. The first looked at starter fertilizer applied with the seed with phosphorus (P) at 30 kilograms per hectare (kg/ha), potassium (K) at 30 kg/ha and sulphur (S) at 15 kg/ha. Crop and yield responses varied by location, depending on soil test levels.

Micronutrient application was investigated in the other two components. Boron was applied at 11.2 kg/ha, molybdenum was applied at 49.4 g/ha and manganese was applied at 2.8 kg/ha with the seed at planting. Foliar trials included boron applied just before flowering, molybdenum applied twice (pre-emergence and at the 4-6 node stage) and manganese applied once at the 4-6 node stage. Combination products Precede (5-19-4-4.0Zn-1.0B), Releaf
(4Ca-1Mg + Transit-S + TE) and 42Phi (4Ca-1Mg + Transit-S + TE) were also compared.

Bowness Davidson says that none of the micronutrient trials provided a significant response, except for Lethbridge in 2016 where Precede, Releaf and 42Phi produced higher yield. However, given the cost of the micronutrients, the application of these combination products was not economical.

The nutrient trials were not carried forward into 2019. Based on the three years of nutrient trials, Bowness Davidson says there were some consistent results.

“Phosphorus and potassium are important nutrients for fababean production. It’s important to maintain soil fertility at an adequate level for high yields,” Bowness Davidson says. “For the micronutrients, this study suggests that they are not necessary for improved production and yield in fababean.”