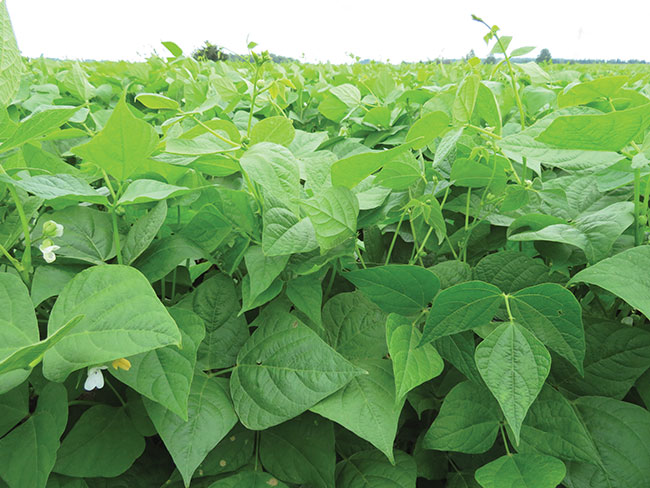 Chris Gillard is working on a project at the Huron Research Station to prove dry beans won’t always respond to N application and seed treatments. Photo courtesy of meghan moran.

For years, Ontario dry bean producers have been encouraged to apply between 10 and 100 kilograms of nitrogen (N) per hectare in dry bean.

“Where edible bean yields have traditionally been low due to bronzing or root rots, apply up to 100 kg/ha (90 pounds per acre, or lb./ac) of nitrogen before planting,” the guide suggests.

“Historically, it’s been argued that application of N will help plants combat root rot and that will help promote bigger root growth, bigger plant and higher yield,” says Chris Gillard, associate professor in the department of plant agriculture at the University of Guelph.

“Manitoba put a number to it and said the plant needs three to 3.5 kg N per 100 kg of seed yield,” he says. “Manitoba has done better work than we have, quite honestly, but we can’t use their data, because they’re a lot drier, soil types are different, and that all affects N utilization.”

Gillard has just published a study looking at N and seed treatment applications in dry bean at the Huron Research Station. The study, entitled “Seed treatment and N rate do not impact dry bean (Phaseolus vulgaris L.) plant growth or grain yield in Ontario,” is based on data collected between 2008 and 2010. It’s the first of a series of studies that will be published on this work, he says, and the most comprehensive study on inputs in dry bean that had been done in a long time in Ontario.

“Our more recent data falls in line very closely with [these results], but I wanted to get this one out first because it’s the first chapter,” he says.

The paper argues that N applications and seed treatments are two strategies that Ontario growers have long used to maximize yields and minimize root rot, but dry beans won’t respond every year.

This is not to say producers shouldn’t be applying N or using seed treatments, Gillard says.

In the case of the latter, in one of the study’s three years, a couple of cold days and nights in the first week after planting slowed down emergence and increased disease pressure. That year, plots that had received a seed treatment (CruiserMaxx plus Dynasty) saw a nine to 27 per cent yield increase over the untreated plots. Averaged over three years, that shows a 33 per cent success rate.

“I expected seed treatment to have some effect [in the] early season, and there’s lots in the literature to show that,” Gillard says, adding that, even so, the effect was lower than he’d expected to see.

The benefits of seed treatments drop dramatically after 10 to 14 days of planting, so they’ll be most effective in protecting seedlings from root rot damage under cold, wet early season conditions. Essentially, they’re insurance against low temperatures immediately after planting.

But there was less of an effect from the use of N over three years.

Nitrogen in dry bean
Gillard says the majority of Ontario growers are using some N in dry bean, from a “relatively small” amount – ranging to 10 or 20 kg/ha in rich soils – to an average average of somewhere around 50 kg/ha in most soils. This amount represents approximately half of what the dry bean plant needs throughout its life.

“Dry beans are a legume crop, so they fix N, and there’s probably not an acre in southern Ontario that hasn’t seen dry beans at some point or another, because this crop was grown by indigenous people 1,000 years ago, so we have those rhizobia bacteria in the soil naturally,” he says.

“Many people consider dry beans to be a lazy nodulator, but the plant will only nodulate if it can’t get nitrogen free from the soil. If it needs less in total, then it won’t nodulate more than it needs to. But the soil is producing N all the time.”

Gillard is not suggesting that Ontario producers are over-applying N. Nitrogen fertilizer promotes growth, and if the root system is struggling, it will help promote root growth, support a larger plant aboveground and potentially increase yields.

One southern Ontario grower Gillard knows saw his operation inundated by rain this summer. In July, he laid down a single strip of side-dressed N on his dry bean field, using a Y tube applicator that he used to side-dress corn. On that strip, he increased pod count by 50 per cent. Afterward he wished he’d applied on the rest of the field. “We rarely see that response, but extreme conditions can warrant additional N,” Gillard says.

“What I am saying is that in some situations, I don’t think you’ll get as big of a response as others. If you look at the soil N levels that we measured at planting and harvest in our study, we measured relatively high soil nitrate levels, so we expected a relatively low response to applying N,” he says. Most growers have the same conditions in their fields because they plant dry beans in early June, when soils are warmer and soil N levels are higher.

Gillard’s more recent unpublished work supports these initial findings. In that study, dry bean showed a significant response to N less than a third of the time on 27 sites. Most of these sites were in farm fields, across a range of crop rotations, tillage practices and cultivars. All of these sites had smaller replicated plots in one spot in the field, and larger replicated strips across the length of the field. Results in the small and large plots within the same field were similar.

Producers should take field history, soil type and soil N levels into consideration before applying, and “be cautious of the amount of N they’re applying,” Gillard says.

“If they have the ability to do variable rate, I encourage them to leave some lower N check strips in their fields, compare them and make their own decisions. I believe there’s an opportunity there for some cost savings for growers. They’re probably putting on a bit more N than they need to.”

Beyond immediate cost savings, there are other benefits: less N loaded into the environment and less risk of runoff to surface and groundwater. European Union customers have a strong interest in sustainable practices and see fertilizer use as a negative, so a reduction in N inputs also means greater marketability down the road.