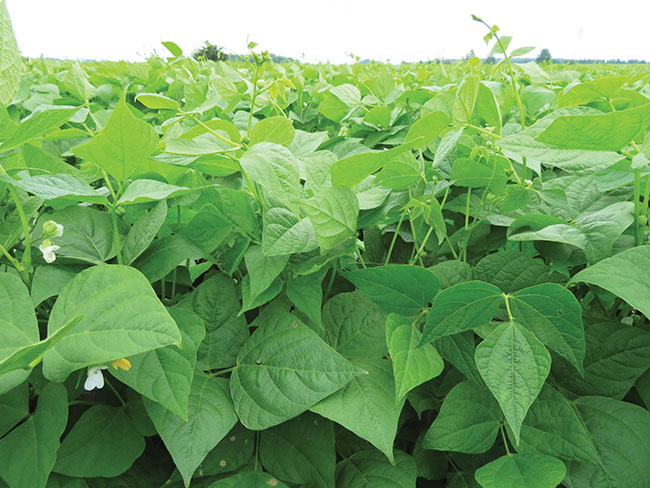 A field-scale project is looking at the effects of variable seeding rates on yields and economic returns for dry beans. Photos courtesy of Meghan Moran.

Could reducing the seeding rate in the most productive zones of a dry bean field result in better economic returns for this high-cost crop? A field-scale project is underway in Ontario to answer this question.

“Dry bean seed is expensive, so if we can reduce the seeding rate and not negatively impact yield or harvestability, then producers can make more money,” says Meghan Moran, the canola and edible bean specialist with the Ontario Ministry of Agriculture, Food and Rural Affairs (OMAFRA).

“And we are hoping there might be other benefits. We know a thicker crop stand increases the chances of white mould, so maybe a thinner stand in the most productive parts of a field, where we typically have high yields and lots of growth, would have reduced issues with white mould.”

So lower seeding rates in the high-yielding zones could potentially save money on seed costs and fungicide inputs while maintaining or improving dry bean yield and quality.

“Some dry bean growers, dealers and agronomists have stated that there could be better returns on investment for variable rate dry beans compared to soybeans or corn, based on some initial results from fields where they were using variable seeding rates,” she notes.

“While dry bean seeding rates in general are fairly well established for Ontario, there is not a lot of data on how low you can go with the seeding rate and still be profitable. So we don’t have good information on what rates growers should be looking at for precision farming.”

The project’s field trials are taking place in three cranberry bean fields and three white bean fields each year for three years, starting in 2018. The trials are comparing different seeding rates in the different production zones of the fields, and evaluating the effects of the rates on crop yields, disease levels and economic returns.

“This is a farmer-led project,” says Moran. “A lot of the ideas came from the Ontario Bean Growers (OBG) Board. And of course the farmer co-operators are crucial. They are carrying out all the field operations using their own equipment, and they have parts of their bean fields planted at very low rates. And I also have to thank Greg Kitching with Premier Equipment in Elmira, who is providing significant technical support.”

One of the project’s objectives is to develop yield response curves for the different zones of the fields. So the seeding rates range from very low to slightly higher than the standard rate.

The high-, medium- and low-yielding zones of the each field are determined based on the historical dry bean yield patterns in the field.

The co-operators apply all other crop inputs at a blanket rate; nothing else is applied at a variable rate.

Moran is collecting the data on crop growth and health. “For crop emergence, the planter data tells us how many seeds they put down, and then I do stand counts so I have the actual plant population. And from there I can determine the per cent emergence,” she says. “I also walk the fields to do ratings on white mould, although some fields didn’t have any white mould last year or this year, and I look at lodging.” 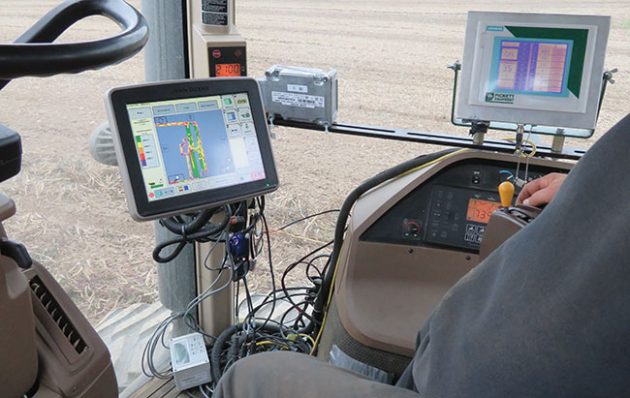 One of the seeding rate prescriptions for the project’s replicated field plots.

A SoilOptix sensor maps soil organic matter, pH, texture and many other soil parameters across each field.

The co-operators harvest the fields, and Moran gets the yield data for each plot from the yield monitors on the combines.

“The project’s other important objective is to demonstrate and validate the use of a yield monitor for large-seeded bean combines,” she explains. “Because the large beans are delicate, they are harvested using specialized equipment. The growers in this project are using Pickett combines, which haven’t historically had yield monitors. So we are creating yield maps of large-seeded beans for the first time in Ontario.”

Greentronics, an Elmira, Ont.-based company, developed this yield monitor. “Two of our co-operators have purchased these yield monitors. This is what is allowing us to do the project because they are now able to get the yields off those field-scale trials.”

She adds, “Having a yield monitor is a significant advance. It helps producers to better understand what kind of yield variability they have across their fields, and it gives them an opportunity to confidently refine their best management practices.” 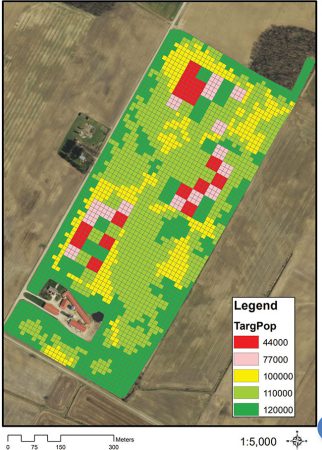 The yield data for each plot is obtained from the yield monitors on the co-operators’ combines.

Moran has conducted some analysis of the data collected in 2018, a year with challenges for the quality of dry beans, but strong yields.

“For the white bean trials, crop emergence was one of the more interesting things. Generally, we saw rates of emergence at 80 per cent and above in the best parts of the fields. But emergence rates were frequently below 80 per cent in the historically average- or low-yielding zones,” she notes.

“In the historically low-yielding zones, the soil is probably tougher. When we used a really low seeding rate in those zones, emergence dropped drastically, down to 60 per cent or less in some cases. Beans sort of push together to come out of the soil, so with fewer seeds it seems to be even harder for them to get out of tough ground, which makes sense.”

“Beans sort of push together to come out of the soil, so with fewer seeds it seems to be even harder for them to get out of tough ground, which makes sense.”

The white bean trials include three different varieties, and these emergence results were true for all three.

“The white bean yields were most stable at the standard seeding rate, which for 30-inch white beans is 110,000 seeds per acre. If we went lower than that rate and sometimes if we went higher there was a lot more yield variability,” Moran says.

“So there is a good reason why 110,000 seeds is the standard, recommended rate. And it is possible that, after three years, we could conclude that there is less risk in using the standard blanket rate than using a variable rate. But we’ll have to wait and see.”

Increasing the white bean seeding rates above 110,000 seeds in the low-yielding zones of the field did not provide an economic benefit. “I ran some rough economics, using seed costs and bean prices, and I found that adding an extra 10,000 seeds per acre in the poorest parts of the fields didn’t really pay.”

The rate of 77,000 seeds per acre was often sufficient in the high-yielding zones of the white bean fields. She notes, “That rate yielded similar to the standard rate in the best parts of the fields. From what I’ve heard, around 75,000 to 77,000 seeds is about the lowest rate used by growers who are already doing variable rate seeding.”

Moran points out the 2018 white bean results are a good reminder that a planter’s seeding rate will not necessarily match the actual plant population, and that decisions on variable seeding rates will need to consider the expected rate of emergence in the different parts of the field.

Interestingly, the cranberry bean trials in 2018 had good emergence across the fields, and the yields generally declined as the plant populations decreased.

“From my rough look at the economics, factoring in the seed costs and bean prices, it seemed that the savings from the lower seeding rates were more valuable in cranberry beans than in white beans,” Moran says.

“From my rough look at the economics, factoring in the seed costs and bean prices, it seemed that the savings from the lower seeding rates were more valuable in cranberry beans than in white beans,” Moran says.

“Cranberry bean seed can be up to three times the cost of white bean seed. So I think the economic assessment will be particularly important with the cranberry bean data. Those seed cost savings with cranberry beans may be worth it, but we’ll have to retrain ourselves to focus on gross revenue rather than just straight yield.”

As Moran continues her analysis of the project’s data, she will also be looking at the effects of the different soil characteristics on emergence and yields in white beans and cranberry beans.

This project will provide much-needed information to help Ontario dry bean growers with seeding rate decisions in precision farming operations. Moran notes that the project’s findings could be useful in other ways too. “[For example,] in 2019, Ontario had tough spring weather so a lot of dry bean growers had poor emergence, down around 40,000 plants per acre, and they didn’t know whether to replant or not. I think the data from our trials will be helpful for those types of replant decisions.”

This research is funded by OBG with matching funds through the Canadian Agricultural Partnership, a federal-provincial-territorial initiative. The Agricultural Adaptation Council assists in the delivery of the Partnership in Ontario.