Long-term, big-impact goal of developing beans able to fix 50 per cent of their N requirements. 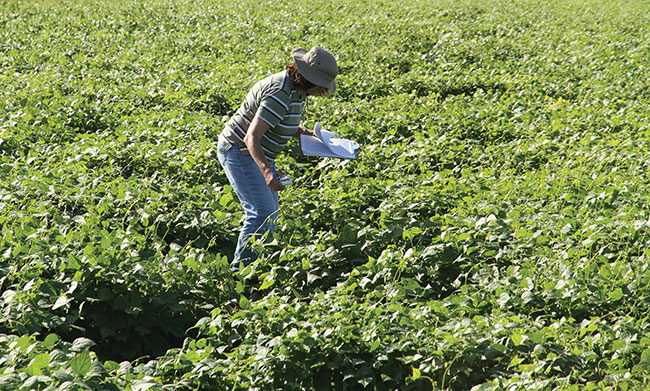 In his lab at the University of Guelph, Karl Peter Pauls, a professor in the department of plant agriculture, is constantly identifying molecular markers for disease resistance and improved yield in a variety of crops, including corn, tomatoes and common bean (Phaseolus vulgaris).

The latter includes many commonly grown dry and fresh bean species, including kidney, navy, runner and broad beans, although Pauls’ lab does not work with fresh beans. Most of Pauls’ efforts are geared at developing new and better dry bean varieties through breeding.

The work is supported by the Ontario Ministry for Agriculture, Food and Rural Affairs (OMAFRA) and the Food from Thought program at the University of Guelph, funded by the Canada First Research Excellence Fund.

Pauls says a major goal for the common bean program is to address the biggest “embarrassment” associated with the crop: it’s a poor nitrogen fixer.

Common beans fix nitrogen by forming a relationship with nitrogen-fixing rhizobia, or bacteria, in the soil around their roots. These rhizobia then form nodules on the roots, in a process called “symbiotic nitrogen fixation (SNF).” The problem? They don’t do it very well.

Pauls says the development of common beans with the ability to fix up to 50 per cent of their own nitrogen requirements during the growing season would make a big difference.

“It’s a long-term goal but a big-impact one, particularly in the area we’re growing beans in, which is surrounded by lakes. Nitrogen runoff is a significant issue in our area. If producers could add less N, it would really make a difference,” he says.

Pauls believes Canada will likely follow Europe’s lead and make it commonplace to evaluate crops on a sustainability index.

According to the Ontario Field Crops Agronomy Guide, dry edible beans obtain less than half of their nitrogen requirements from nitrogen fixation. Depending on the field history – for example, whether nitrogen-fixing legumes were planted on a field in the previous year – producers are advised to apply up to 100 lbs. of N – similar levels to what they’d use in corn, Pauls says.

What’s going on in the plants that prevents them from fixing their own nitrogen? Pauls says it’s an immediate physiological response to a nitrogen application. “If plants standing in a field are suddenly given a lot of available nitrogen, they’ll suppress the development of nodules on their roots, because it’s actually metabolically expensive for the plant to create those nodules,” he explains. “If they have N available, they don’t do it.”

But as common beans are poor N fixers, it doesn’t make sense for farmers not to apply N: they won’t get the yields they need.

The goal of Pauls’ program is to look among the broad collection of bean genotypes, including heirloom varieties, for that nitrogen-fixing capability; if it becomes possible to breed common bean cultivars that are better able to fix their own nitrogen, farmers can scale back N applications without yield losses. 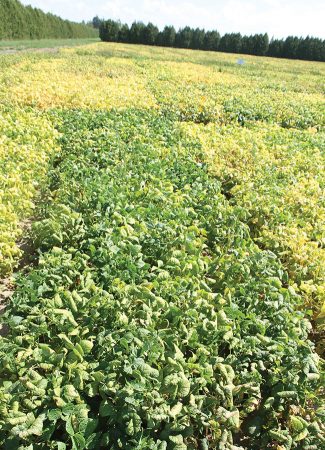 A nitrogen treatment in a common bean field.

Heirloom genetics
Some of Pauls’ program has analyzed the performance of heirloom bean cultivars under low- or no-N conditions. In a recent study led by Pauls’ then-graduate student Jennifer Wilker, the SNF ability of 42 heirloom and conventional types was compared under low-nitrogen field conditions.

What Wilker and Pauls found was that, on average, heirloom varieties did not fix more nitrogen than their conventional counterparts. A few, however, did: five heirloom genotypes fixed more than 60 per cent of their N from the atmosphere.

“Heirloom genotypes represent a useful source of genetics to improve SNF in modern bean breeding,” Wilker concluded in a publication on the study.

In another study, Yarmilla Reinprecht, a postdoctoral researcher in Pauls’ lab, looked at the three-way interaction between common bean genetics, nitrogen and rhizobia to try to understand that relationship.

In the study, 22 genotypes were screened for their ability to fix atmospheric nitrogen on N-poor soils. Nitrogen application reduced SNF to different degrees in different genotypes, while applying rhizobia resulted in inconsistent results.

The study identified a few genotypes that could be grown in high- or low-N environments, or showed good potential for reducing inputs – and thus farmers’ dependence on N inputs.

Pauls says the ability to fix nitrogen has not been lost in modern lines – it’s still there. “We should be shopping in the whole mix of germplasm that we have for that capability.”

Turning to heirloom genetics can mean compromising the productivity of beans in other ways: researchers have worked hard to breed modern common beans that stand “upright and are combinable,” as Pauls puts it.

“Some of these heirloom varieties are terrible that way, and they’re very viney. So you do a lot of stepping back,” he says. “But if they have a trait that’s of value, in a long-term breeding program, we’ll incorporate them in.”

The most compelling reason to bring heirloom varieties into breeding programs, however, is not their nitrogen fixing abilities, but rather their connection with particular family recipes, and their visual appeal. Common beans, particularly dry beans, can be very beautiful and have dramatic variation in colour.

In his latest round of experiments, Pauls is running tests on genotype responses to added N in highly controlled environments in growth cabinets in the lab. In the field, background levels of N can make actual levels in the field less precise even under careful application regimens.

“We’re ranking their responses to that inhibition,” he says. “That helps us determine the threshold of inhibitory levels of N, and it helps us identify lines that have the attributes that we want. We’ll take them back out into the field later on. Ultimately, they have to prove themselves in the field.”

In another collaborative field experiment with Guelph researcher John Sulik, Pauls is measuring photosynthetic levels in small plots to see if differences in photosynthetic capacity – related to coloration – are helpful in predicting yield.

“We’re looking at whether we can pick up the differences among those plots established with different genotypes and treatments, looking at varying N levels and the rhizobia strains. Right now, we’re doing a lot of measurements in small plots with handheld instruments and simultaneously flying drones over them. Ultimately we are trying to use drone imaging technology to help us make some measurements related to photosynthesis and yield,” he says.

Each experiment represents a small – sometimes very small – advance toward the larger goal.

“Every year we try to advance it a little bit,” Pauls says. “On average, the goal is to increase yields by one per cent every year. I’ve been involved in this for 30 years – that means the yield expectation of the farmer is double what it was 30 years ago.