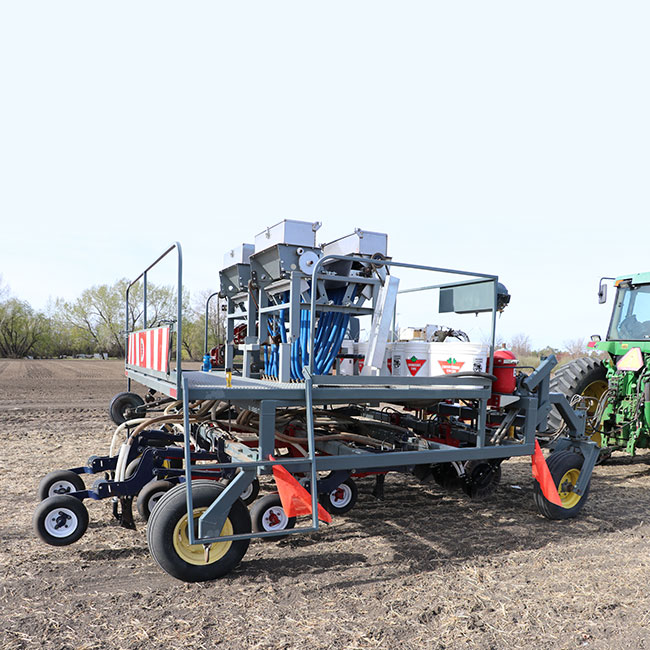 A custom-made plot drill with adjustable row spacing and openers was used to conduct the seed-placed phosphate trials. Photos courtesy of Patrick Mooleki.

“For nitrogen, there are good guidelines for different combinations of row spacing and opener width,” says Patrick Mooleki, a research scientist at Agriculture and Agri-Food Canada’s Saskatoon Research Centre. “But for phosphate fertilizer, rates are based on a knife opener with a one-inch spread and nine-inch row spacing with good to excellent soil moisture. Producers are asking how much phosphate fertilizer can they apply with the seed if they are using wider than one-inch openers or if they are using a wider row spacing.”

Using a one-inch opener and nine-inch row spacing, the safe rates of seed-placed P in pounds P2O5 per acre for canola are 15 for Alberta, 20 for Manitoba, and 25 for Saskatchewan. However, these rates are not adequate to meet P requirements of canola.

Mooleki headed up research in 2018 and 2019 to see if those rate guidelines could be updated with different seedbed utilizations. He hoped to find the maximum safe rate of P fertilizer at different opener widths and row spacings in order to provide guidance to farmers and agronomists. The research was funded by Alberta Canola and SaskCanola under the Canola Agronomy Research Program.

Research was conducted at Saskatoon, Melfort, and Scott, Sask., and Brooks and Lethbridge, Alta. Treatments included nine-inch and 12-inch row spacing, opener width of one, two and four inches, and seed-placed P rate of 20, 35, 50 and 65 pounds P2O5 per acre. In the second year, a control treatment of zero pounds of P fertilizer was included.

Nitrogen and sulphur were banded prior to treatment applications on the same day. To ensure a uniform seedbed, rotary or tine harrowing was conducted prior to seeding. Weeds and insects were controlled as needed. 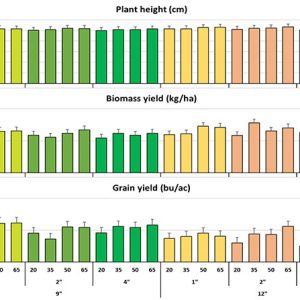 The research found that high rates of phosphate could impact emergence, but not necessarily yield. 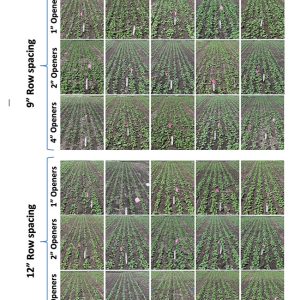 Seedling toxicity observed
Plant establishment was affected by several of the treatments. Generally, decreasing row width or increasing opener width resulted in greater stand establishment. Increasing seed bed utilization by either narrowing row spacing from 12 inches to nine inches and/or increasing opener width from one inch to four inches resulted in reduced P toxicity of seed-placed P fertilizer, leading to increased plant populations. Increasing the rate of seed-placed phosphorus increased the toxic effect on seed and seedlings, leading to reduced plant population. Mooleki explains that this toxicity was reduced by increasing seedbed utilization, which reduced the concentration of P fertilizer near the seed.

One issue that was observed in 2019 on heavier soils was that the wider four-inch opener threw soil on rows of front openers, burying the seed deeply and affecting germination and emergence. This occurred more with the nine-inch row spacing than the 12-inch row spacing.

“The 2019 drill operator was probably going faster than in 2018, so we saw some plant count reductions with the four-inch opener,” Mooleki says.

Averaged over the two years and five locations, plant counts at 14 and 21 days after seeding and at harvest showed a general trend of declining plant counts as fertilizer rates increased. However, at all rates, row spacing and opener configurations, plant counts remained above the minimum five to eight plants per square foot as recommended by the Canola Council of Canada.

“We observed less toxic effects of seed-placed P fertilizer at different seedbed utilization ratios than expected, indicating that canola can tolerate higher levels of seed-placed P when N and S (sulphur) are not placed with the seed. By banding the N and S fertilizer away from the seed, we removed a significant source of toxicity, which otherwise would enhance toxicity of seed-placed P in canola,” Mooleki says.

Even though plant counts declined with increasing P fertilizer rates, small but significant yield increases were observed. Mooleki says this could be attributed to individual plants branching out more to compensate for the reduced plant population. It also could have been attributed to the increased amount of available P to the growing crop.

Several limitations prevented the development of new seed-place P fertilizer guidelines. The first was the exclusion of seed-placed N and S, which resulted in higher rates of seed-placed P looking safe.

The second limitation was the inability to separate the beneficial effect of increased P rate with the compensatory ability of a canola crop to increased seedling toxicity. The third limitation was the lack of adequate site-years to draw strong conclusions. There was a significant interaction effect by year with other factors, such as precipitation.

Still, the research did shed some light on the interaction of row spacing, opener width, and fertilizer rate.

“The research did show that phosphorus toxicity is real and can reduce canola plant populations, but doesn’t necessarily impact yield,” Mooleki says.  “If farmers are applying nitrogen and sulphur separately, the research showed that canola can tolerate higher seed-placed phosphorus fertilizer without impacting seed yield and quality.”