Disease and insect pests are challenging in this high-maintenance crop. 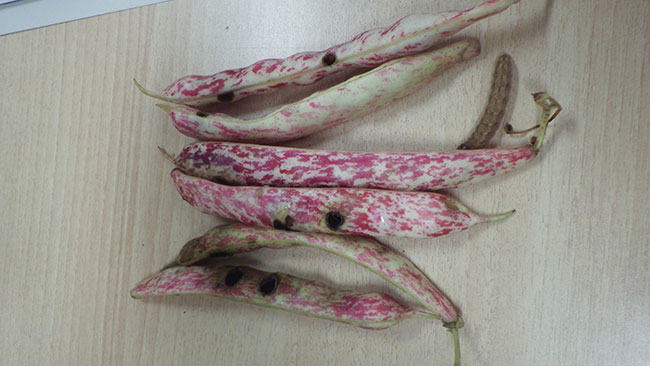 Western bean cutworm is a late-season pest that feeds on pods and can cause significant yield loss. Photo courtesy of Jocelyn Smith, University of Guelph Ridgetown Campus.

Dry beans are a high-maintenance crop relative to most field crops, according to Chris Gillard, associate professor in the department of plant agriculture at the University of Guelph.

That’s why disease and insect pests represent a tougher challenge in dry bean than many other crops. “I routinely get questions from growers asking, “Do we ever get to leave the sprayer out of the field with this crop?” Gillard says.

From fungal diseases to soybean cyst nematode, keeping on top of the latest research and management strategies will help producers minimize the risks in 2020.

Gillard is the lead on a five-year pest management project under the federal government’s Canadian Agricultural Partnership funded through Saskatchewan Pulse Growers. The project, which began in 2017 and will continue until 2022, includes a range of studies investigating pests of dry bean and control options.

Belowground diseases are harder to scout and diagnose, Gillard says, so they often don’t get the attention they deserve.

Root rot, caused by Rhizoctonia, Fusarium and Pythium pathogens, is the biggest issue facing dry beans – “it’s a problem in most fields in most years,” Gillard says. Symptoms aboveground can include damping off, stunted growth, leaf-yellowing and leaf drop; belowground, producers should look for root death or brownish lesions on roots. The disease can be managed with a combination of seed treatments and the use of nitrogen fertilizer to help the crop grow out of it.

White mould, caused by Sclerotinia fungal pathogens, is exacerbated by wet, cool weather and humid conditions under the canopy. For that reason, it can affect producers’ better fields. Gillard’s team is involved in evaluating fungicides for their effectiveness against white mould.

In research published in 2015, Gillard demonstrated fungicide was most economical in early-planting environments, and the Group 29 fungicide fluazinam (trade name Allegro) offered most consistent control.

Anthracnose, caused by the fungus Colletotrichum lindemuthianum can also be an issue in dry bean, Gillard says. “Anthracnose can get into the crop at any time, and it continues to work at the crop until the crop dies or matures,” he says.

Gillard’s team is involved in evaluating seed treatments for anthracnose in dry bean, but if it’s found in a crop, foliar fungicides are required for control. The good news is that most fungicides that are effective against white mould are also effective against anthracnose, says Gillard, which means producers get “two for the price of one.”

Producers are spraying hundreds of thousands of acres of corn and dry beans for western bean cutworm (WBC), Gillard says.

In dry bean, WBC represents a threat partly because the pest is very difficult to scout. The larvae feed at night and hide in soil cracks during the day, so producers are unlikely to find it in the crop. Most cutworms are early season pests, but WBC is a late-season pest that feeds on the pods, which can mean significant losses in yield and quality.

A little over a decade ago, the pest hadn’t yet been detected in Ontario; now, researchers have proof WBC overwinters in the province, but still don’t have enough data to support specific control recommendations.

For the last five years Gillard’s team has employed pheromone traps to try to predict peak moth emergence; this typically happens from the end of July to the beginning of August. In one study, spray timing was most effective in the four to 20-day window following emergence.

The pest has spread across western and southwestern Ontario, but although dry bean is an alternate host of SCN, very little research has focused on control measures.

“We don’t have one five hundredth the research effort in dry beans as in soybeans,” Gillard says. Again, it’s a belowground pest, so its presence can fly under the radar until there are visible aboveground symptoms. “You can have 30 per cent yield loss before it’s visible in the crop,” he says.

This summer, his team plans to do some survey work to establish its prevalence in the province. But because resistance is the best management tool for SCN, another new project will focus on finding resistance genes.

Some market classes of dry bean already have good resistance to SCN, Gillard says, including black beans and navy beans, but others – like kidney beans – are more susceptible.

“We have resistance available within dry beans but it seems to be only in some market classes, and we don’t know if it’s a single gene or multiple genes, or where they are in the genome, or really anything about them,” Gillard says.

This summer, Gillard will partner with Ag Canada researcher Jamie Larsen to begin identifying resistant genes and molecular markers so they can improve dry bean genetics in the longer-term.

Until then, Gillard continues to evaluate chemical and biological seed treatments currently on the market for soybean for their efficacy in dry beans. None of these products is yet registered in dry beans; Gillard says they may not provide enough of a measure of control that registration is warranted.

For now, producers’ best approach to pest management in dry bean is to stay alert. For many pests, chemical controls can be effective if producers have a handle on field history, weather forecasts and risk factors. For others, staying up-to-date on the latest research is a good first step.

“We can manage a lot of these problems,” Gillard says.