With Group 2-resistant wild mustard a continuous problem in Saskatchewan lentil fields, growers are looking at new ways to control the weeds. Now new research is examining whether inter-row spraying is a viable option for weed control in lentil crops. 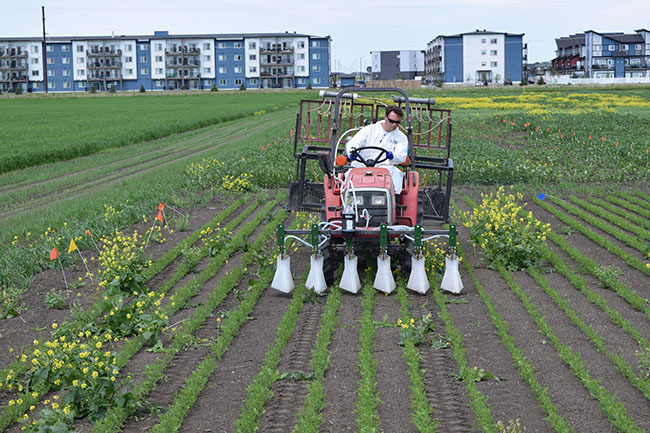 Saskatchewan lentil growers continue to struggle with Group 2-resistant wild mustard to the extent that in central Saskatchewan, lentil fields bloom yellow during the summer. Clearfield lentil varieties were to be the answer to weed control in lentils, but with Group 2 resistance, limited options are available to control these resistant weeds.

New research by Chris Willenborg, an associate professor with the College of Agriculture’s department of plant sciences at the University of Saskatchewan, is hoping to provide a new option: spraying non-selective and other herbicides between the seed rows to control weeds while avoiding contact with the lentil plants.

“The idea came from a grower three or four years ago and we thought that there might be potential,” Willenborg says.

Willenborg’s group started working on the research last year, building a shrouded-boom plot sprayer and working out the kinks in calibration and sprayer operation. The parts came from Garford Farm Machinery Ltd. in the U.K. Garford manufactures band and hooded sprayers and camera-guided inter-row tillage weeders.

“If the concept works, we could get to the point where a grower could even spray weeds later into the growing season. Critics would argue that there is a loss of yield when spraying later, but these late-emerging weeds and weeds that are not controlled by the post-emergence application can have a large impact on the spread of resistant weeds,” Willenborg says. 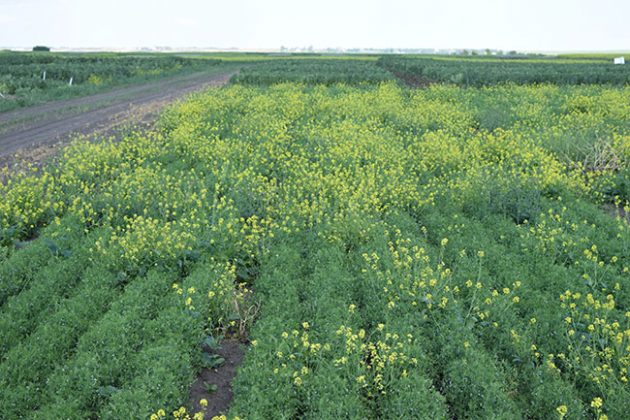 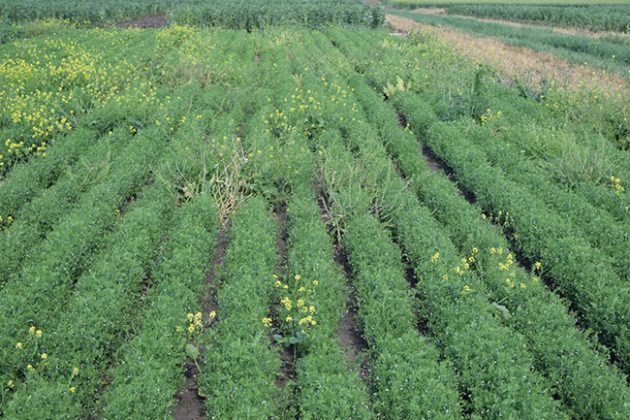 Herbicide-resistant rigid ryegrass is a serious problem in Australia. Multiple resistance to seven sites of action has been identified. Growers have had to resort to many different weed control practices, and one is inter-row, shrouded spraying with non-selective herbicides.

Southern Precision in Naracoorte, South Australia, manufactures a shielded sprayer called the Crop Stalker. It can spray between rows as narrow as 10 inches. Crop Stalker uses a video-based sensor to shift the spray boom side to side by as much as two inches to keep the shielded boom between the seed rows. A nozzle kit can also be added to spray a separate herbicide over the seed row.

In Western Canada, researcher Eric Johnson conducted inter-row spraying trials as part of a Mustard 21 research project when he was with Agriculture and Agri-Food Canada in Scott, Sask. This trial didn’t use shielded spray nozzles, but rather, the sprayer used drop nozzles that ran between the crop rows with large droplet size to minimize drift. Spray application was done under very calm conditions. Various selective and non-selective herbicides were applied.

“We had variable results. For the most part, we were able to spray between the rows without shrouds, but I think using shrouds are a much better system,” Johnson says.

Johnson says what they learned from his involvement in both the Mustard 21 project and the University of Saskatchewan lentil project was that there are benefits and risks to using systemic herbicides such as glyphosate, and contact herbicides such as glufosinate. A systemic herbicide provides benefits of being able to control weeds that are partially hit with glyphosate, such as when the weed is growing out from the seed row. The downside is that a partial hit on a crop plant could mean severe crop damage from systemic movement of glyphosate.

In addition to investigating herbicide effectiveness, Willenborg’s research will also help to identify spray timing, yield benefits and how much yield loss occurs due to the weeds growing within the seed row.

“My hope is that if the concept works in lentils, that we have another tool for growers to use. There are many ways it could be implemented with RTK guidance, sensors that only spray when a weed is detected, and incorporating on-row spraying with registered herbicides,” Willenborg says.


Related
More competitive soybeans = less spraying
Spraying technique, nozzles not a complex issue
Burning down herbicide costs by up to 75 per cent
Gowan Canada introduces a new herbicide for canola and lentil growers