One of the project’s studies compared the competitiveness of three soybean varieties. In this example, showing plants at the R2 stage, the plots were kept weed-free until the VC stage. Photo courtesy of Jonathan Rosset.

If you want to reduce your risk of developing herbicide-resistant weeds in your soybean crop, focus on faster canopy closure. That’s one finding from a recently completed Manitoba project.

“We have learned from the soybean growing areas to the south and the east of Manitoba that some soybean production systems are highly likely to develop weeds with herbicide resistance, particularly resistance to glyphosate,” explains Rob Gulden, an associate professor at the University of Manitoba who led the project.

“Soybean is not a terribly competitive crop, and in those longer-season growing areas, multiple in-crop applications are often needed to keep the soybean crops weed-free to the point where yield losses are zero or tolerable. Those multiple in-crop applications – particularly if they use the same herbicide mode of action over and over again – put the producer in the highest risk category for selection for herbicide-resistant weed biotypes.”

So this project looked at ways to reduce the need for additional in-crop herbicide applications by increasing the crop’s competitiveness with weeds. This is an especially important issue in Western Canada where soybean is a relatively new crop because researchers are still working to understand how soybean interacts with Prairie weed communities.

He explains that the dominant weeds in any region are a function of the area’s cropping history. For example, wild oat has been a major weed in Western Canada for many decades because it is so well suited to the Prairies’ spring-seeded, early emerging, annual cereal and oilseed production systems. “But in some of the regions where soybeans have been grown for a long time, they have a whole suite of different weeds that are adapted to the warmer conditions in those regions and to later-emerging or slower-growing crops, like corn and soybean.”

In this project, Gulden and his team used the concept of the “critical period of weed control” (CPWC). He defines the CPWC as “that period in a crop’s life cycle where the crop has to be essentially weed-free to avoid unacceptable yield losses at the end of the season. Any weeds that come up after the end of that period really have no effect on the crop’s yield. They might influence harvestability, but they don’t affect yield directly.”

Using the CPWC, they evaluated the effects of three cultural factors: the spacing between soybean rows; the spacing between soybean plants in a row; and the soybean variety. These three factors can each influence how quickly a crop’s canopy closes. Faster canopy closure makes the crop more competitive. A more competitive crop has a shorter CPWC. And a shorter CPWC means fewer in-crop herbicide applications are needed to avoid a yield penalty.

The replicated field trials took place in 2016 and 2017 at sites in Manitoba near Carman, St-Adolphe and Whitemouth. The natural weed community was used at each location so the weed species and densities differed from site to site. For each site, the trials took place at different fields each year, but the project team chose similar fields from year to year. So the dominant weed species for any given site were very similar from year to year, but the weed densities may have varied. Sites with stronger competition from weeds had a longer CPWC.

Jonathan Rosset, one of Gulden’s graduate students, worked on the project under Gulden’s supervision. The project’s funding was from the Manitoba Pulse and Soybean Growers and Western Grains Research Foundation, with in-kind support from Richardson International and Monsanto. 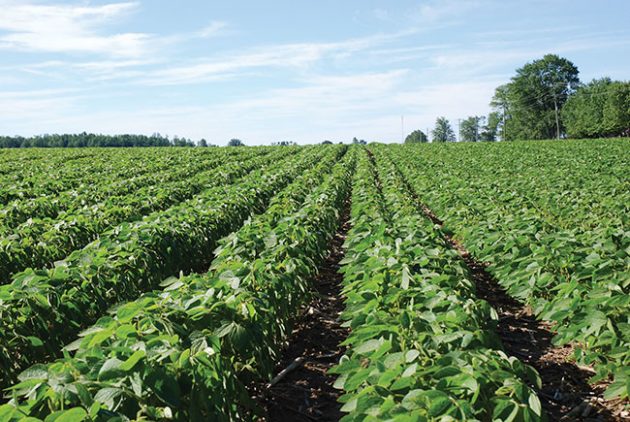 “For row spacing, we compared two extremes: a narrow 7.5-inch, and a wide 30-inch. All our other trials were planted at 15 inches, which is a recommendation from North Dakota as a good row spacing for all-round soybean performance,” Gulden says. “North Dakota has its fair share of glyphosate-resistant weeds so 15 inches might not be the best row spacing from a weed control perspective,” he adds. In the row spacing trials, the soybean variety Dekalb 23-60 was seeded at 180,000 plants per acre.

The results showed that, of the three cultural factors evaluated in the project, row spacing had the biggest and most consistent effect on the CPWC.

“The narrow-row treatment equated, on average, to the need for at least one less in-crop herbicide application. So narrow rows resulted in a pretty dramatic reduction in the selection pressure for herbicide resistance and in the cost to the producer for that extra herbicide application.” In a situation where yield losses up to 10 per cent would be considered acceptable, none of the narrow-row treatments would have required more than one in-crop application, and most would not have needed any in-crop herbicide.

The narrow-row soybeans also tended to yield better under weed-free conditions than the wide-row soybeans. “We would expect that under Manitoba growing conditions. We have a very short season, and soybeans are very slow to develop. A narrow-row soybean crop is much more able to capture more of the available sunlight because there is less soil to be seen throughout the season,” he explains. In Manitoba’s short growing season, soybean plants in wide rows can’t compensate as much or may never achieve full row closure. “Yield is built by how much sunlight the crop intercepts, and if a large part of the field has no crop cover for most of the season then there is a lot of sunlight that is not being converted into yield.”

So avoiding wide rows is better for both soybean yields and weed management. Gulden suggests row widths somewhere from 7.5 to 15 inches. “I’m not sure exactly where the magic spot is between those two spacings and there may be a variety effect as well.”

The 180,000 treatment is based on Manitoba Agriculture’s recommendation of a plant density of 180,000 to 210,000 plants per acre for soybean. Gulden notes, “The 0.75X treatment is based on some research from Yvonne Lawley’s lab at the University of Manitoba. That research showed that under weed-free conditions – so situations with frequent herbicide applications – soybean population densities around 130,000 to 140,000 were optimal for yield.”

As expected, the 0.75X treatment was much less competitive with weeds than the 1X and 1.5X treatments. The low plant density significantly lengthened the CPWC in most instances.

He suspects the 1.5X results might reflect the particular weed species and densities in the project’s plots. “For example, we have done research on soybean plant density responses with Chris Willenborg [of the University of Saskatchewan] using volunteer canola as the weed. We had to go well beyond the recommended plant density for soybean to even come close to maximizing the yield potential under competition with a highly competitive weed like volunteer canola.”

The yield results in the plant density trials also held some surprises. At each location, the 0.75X treatment had the lowest yield as expected, but the yields for the 1X and 1.5X treatments were usually about equal to each other.

“I know that research shows lower plant densities work under ideal weed-free conditions with lots of herbicides, but as a weed scientist, I’d say that 180,000 plants per acre seems to be a decent density from what we’ve seen in these experiments,” he says.

“There certainly was an advantage with 180,000 compared to 0.75X for reducing selection pressure for herbicide resistance. But going from 1X to 1.5X didn’t seem to pay off; it didn’t shorten the critical period of weed control and it didn’t increase soybean yields.

“Now, these results are just for two years at those three locations, and 2017 was pretty dry, which may have affected our results a little. Perhaps if we were to do this trial over 20 years and many more locations, we might find an advantage to the 1.5X treatment.”

Another important factor in canopy closure can be the crop variety. Gulden notes, “We know from other crops that some varieties close the canopy more quickly than others. And we know that some soybean varieties are more bushy and branched while others are more erect, but we are not sure how that affects their ability to compete.”

The project compared Dekalb 23-60, Dekalb 22-60 and Dekalb 24-10. “They were different maturity types, and my thought was that faster-maturing varieties might close their canopies faster,” he says. The three varieties were planted in a 15-inch row spacing at 180,000 plants per acre.

There was no clear variety winner in terms of shortening the CPWC. The results depended on the location and the year.

“It was a surprise that there wasn’t one variety that did better everywhere. Based on what we’ve seen in these experiments, I can’t draw any definite conclusions on the variety side of things other than we found that there is relatively consistent behaviour of certain varieties at certain locations,” he says. “It’s hard to say whether that has more to do with the soil type and/or the specific weather at that location or with the location’s weed community because all of those things varied somewhat from year to year.”

The project’s results show that using narrower rows and adequate plant densities can help reduce the number of herbicide applications needed in soybean, helping to lower the risk for developing herbicide-resistant weeds.

To follow up on some of the project’s findings, Gulden has developed a soybean research proposal with Charles Geddes, a research scientist with Agriculture and Agri-Food Canada. “One objective of our proposed study is to examine some of the variety effects more closely,” Gulden says. “We also want to better understand the plant density effect with respect to weed-free versus weedy conditions because the yield response curves under weedy conditions and weed-free conditions are very different.”

He adds, “Given the risk of glyphosate-resistant weeds, I’m not sure how valid it is to aim for a pristine, weed-free field. We need a much better understanding of how some crops perform [under varying levels of weed competition] and what we can do when we have weeds that we either can’t control or have a very difficult time controlling with herbicides. So some of our practices may have to be tweaked to maximize production.”