Don’t hold your breath waiting for a silver bullet. 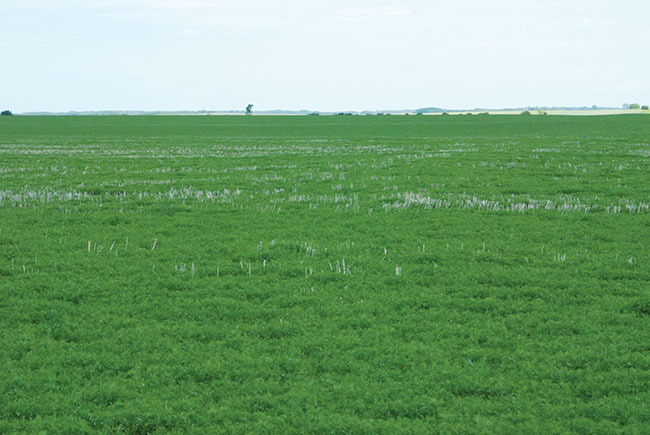 Some old, some new and some maybe coming – sometime. That’s the state of pulse herbicides in Western Canada. Very few new herbicides have been registered in the last decade.

“There’s still an attitude that a silver bullet is coming. There may be new herbicide actives coming, but not very soon,” says Eric Johnson, weed scientist at the University of Saskatchewan. “Nobody develops herbicides for pulses. Most new registrations come after the active has been registered in corn, cotton, rice or soybeans.”

As pulse crops such as pea, lentil, and chickpea became more common across the Prairies, so did registrations for weed control in those crops. Prior to the Group 2 imi-chemistries being registered in 1990, a group of herbicides formed the foundation of weed control. Some were pre-emergent and others post-emergent.

Use of these herbicides faded as the Group 2 imi-herbicides Pursuit, Odyssey, Solo and Ares were registered in the early 1990s, followed up with the introduction of Clearfield lentil in 2007.

In 2002, the Pesticide Minor Use Program was introduced, and research at Agriculture and Agri-Food Canada and the University of Saskatchewan provided data for new herbicide registrations in pulse crops. These included the Group 14s carfentrazone (Aim), sulfentrazone (Authority), flumioxazin (Valtera); and Group 15 pyroxasulfone (Focus, Zidua).

“A lot of these chemistries were old modes of action, but new to Western Canada,” Johnson says.

Johnson says quite a few of the most recent pulse herbicides are soil active and require moisture to be effective. They tend to be less consistent because of environmental interactions, and are generally not as broad spectrum as some of the older chemistries. Crop tolerance, especially lentil, is also a concern with the soil active chemistries.

“Clearfield lentil changed grower expectations of weed control and crop safety – both were very good. Those expectations can’t be as high with these new soil active chemistries as they were when Odyssey first came out,” Johnson says.

A new registration on chickpea and lentil is the registration of Goldwing (pyraflufen plus MCPA ester; Group 4 plus 14). Already registered on field pea, Goldwing is a pre-seed burndown herbicide that controls a range of broadleaf weed herbicides through contact and systemic action. It can also be tank-mixed with glyphosate for enhanced control and improved herbicide resistance management.

Nufarm is also working on registration of Fierce (flumioxazin plus pyroxasulfone; Group 14 plus 15) for application prior to seeding pulse crops. Fierce is already registered on soybeans, spring wheat (not durum) and field corn for residual control of broadleaf and grass weeds including Groups 1, 2, 4, 5 and 9 biotypes.

A potential new chickpea herbicide is a Group 6 active pyridate. It is an older chemistry that was investigated in the 1990s by Syngenta and is now with Engage Agro, which is working on a new formulation. The trade name is Tough 5EC, and it is a post-emergent product with a contact mode of action and no residual.

More recently, pyridate was re-evaluated as part of a large pulse weed control research led by Dr. Chris Willenborg at the University of Saskatchewan and funded by the Saskatchewan Pulse Growers. Chickpea tolerance was very good to pyridate and provided acceptable control of wild mustard at a rate of 900 grams of active ingredient per ha-1. It works on a number of broadleaf weeds and is strong on kochia, pigweeds, and lambs-quarters. Engage Agro is working on a submission for registration. 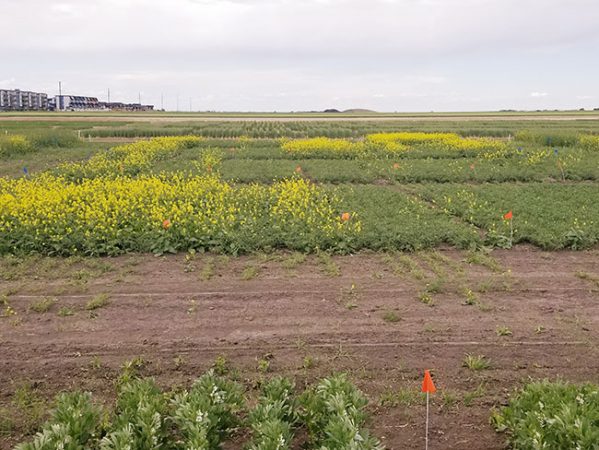 Several recent registrations have given lentil growers more options for weed control. Focus (pyroxasulfone plus carfentrazone; Group 15 plus 14) controls some grassy and broadleaf weeds. It is applied pre-plant or pre-emergent in the early spring or fall.

Johnson says some crop injury showing distorted lentil growth from Focus application has been observed. However, he says the lentils usually recover. More injury is noticed with shallow-seeded lentils but research found that it takes an application of three-times the rate before a major yield loss. “Lentils can take a more injury than you would expect.”

Johnson says growers should understand that Valtera and Focus are not Edge substitutes in lentil. Valtera is fall-applied and provides good control of winter-annual weeds (including narrow-leaved hawk’s beard), and the first major flush of kochia. However, there isn’t enough residual to provide season-long control of kochia flushes.

Focus can be very effective on cleavers if soil organic matter is less than six per cent. Focus is also very good on downy and Japanese brome. Other weed control is environment dependent.

A recent registration in November 2018 on lentil, field pea, soybean and corn was Heat Complete (saflufenacil + pyroxasulfone). In a tank-mix with glyphosate, the pre-seed burndown will control a wide range of broadleaf and grass weeds, for the control or suppression of Group 1, 2 and 9 resistant weeds.

“Heat Complete combines the advantages of a Heat LQ and glyphosate burndown along with extended residual activity on tough-to-control weeds. The real drivers are residual suppression of kochia and wild oat,” says Dan Packer, pulse crop manager with BASF in Mississauga, Ont.

“Heat Complete works well in a herbicide layering system with a pre-seed burndown and residual control or suppression of some weeds, followed up with an in-crop treatment with herbicides like Solo, Odyssey or Viper,” Packer says. “The idea is to take some of the selection pressure off of the post-emergent herbicide.”

In field pea, managing Group 2 herbicide resistance is becoming increasingly important. An example of herbicide layering to manage Group 2 resistant cleavers in field pea would be to use a pre-emergent herbicide like Edge (fall-applied and heavy harrowed) or Authority or a Heat herbicide. This application would be followed up with an in-crop post-emergent application of Viper or Basagran. Two years of research in Rosthern, Sask., on soils with organic matter greater than six per cent found Edge fall-applied plus Heat pre-emergent followed up by Viper post-emergent produced around 90 per cent control of Group 2-resistant cleavers.

Screening for potential Minor Use applications has been conducted on several herbicides. These include Heat, Authority, Viper, Valtera and Focus. Data is being generated to support potential applications, but none are registered on fababean at this time.

Johnson says for most pulse crops, herbicide options will continue to be few and far between. “Weed control will likely require other integrated practices to provide broad-spectrum control.”