Controlling weeds during the critical weed-free period is crucial to soybean crops. 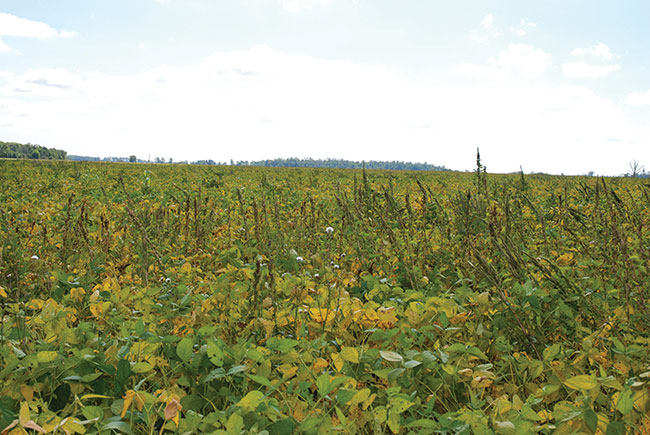 Similar to corn and other crops, controlling weeds early and through the critical weed-free period for soybeans is very important for maximizing yields and crop performance. Although soybeans are quite adaptable, research is showing they are very sensitive to early season weed competition and need all the help they can get until the plants are large enough to crowd out competition.

Clarence Swanton, weed scientist at the University of Guelph, recently completed a study on the impact of weed competition on the crop. According to Swanton, as reported in the October 2017 edition of Top Crop Manager East, plants detect neighbouring plants by constantly analyzing the spectrum of light reflected from surrounding surfaces. A plant experiences physiological stress when surrounded by other plants, and the impact of weed competition on the crop goes beyond just competition for resources such as water, nutrients and light – it also includes a plant’s ability to sense competition. If weeds emerge prior to or shortly after the crop, the soybean plant senses the weed pressure and will change its growth pattern such as shallower rooting or reducing size and yields.

“Although soybeans are very plastic and flexible, they will grow differently if they sense weeds are there,” says Allison Hayward, field development representative for FMC Agricultural Solutions.

“From basic soybean physiology, the plant needs to have no competition until it’s well established. Then it can grow to its genetically designed potential, including yields.”

Soybean growers often hear the “start clean, stay clean” message from industry, Hayward adds. “In Ontario, tillage practices, or non-residual herbicides like glyphosate, may help the crop start clean, but it won’t stay clean. Soybeans do not compete well with weeds; even the smallest ones at the time of germination will affect the growth of the soybean. That’s where a pre-plant/pre-emergent residual product, providing a longer-lasting herbicide barrier, really comes into play.”

Hayward advises applying a moisture-activated preventive product, which forms a barrier at or just below the soil surface. Products like FMC’s Authority family of herbicides provide a protective barrier, controlling weeds before they can emerge and cause that growth pattern change in the soybean plant. With unique modes of action, they can be tank-mixed with other residual and burndown products to control the weed spectrum growers have in their fields, including weeds resistant to groups 9 (glyphosate), 5 and 2.

With some pre-emergent application, once the product is rainfall activated and it’s not disturbed by other field operations, it will alleviate pressure from the first flush of weeds and help make post emergent weed control applications more effective.

For broadleaf weed control in soybeans, Hayward says applying a pre-plant or pre-emergent herbicide, like Authority 480 (Group 14), with or without glyphosate, will help facilitate timelier glyphosate applications in glyphosate-tolerant soybeans.

For grassy and broadleaf weeds in identity-preserved (IP) and herbicide-tolerant soybeans, Hayward recommends choosing a pre-plant/pre-emergent herbicide with two modes of action, like Authority Supreme (Groups 14 and 15). This allows growers to layer herbicides, rotate groups and manage weed resistance as they move from their burndown to in-crop herbicide program.

It’s important to keep soil type, soybean system and weed spectrum and/or pressure in mind when choosing the right product and appropriate rate, adds Frances Boddy, product manager for FMC. An Authority Supreme “setup treatment” for herbicide-tolerant soybeans will provide early-season control of grassy weeds and resistant or hard-to-control broadleaf weeds, allowing the in-crop glyphosate application to perform better. Conversely, a higher or “residual rate” can be used for herbicide-tolerant and IP systems, “where longer residual is needed for difficult-to-control weeds like waterhemp and lamb’s-quarters,” Boddy says.

“There is an increasing trend of growers using residual products prior to herbicide-tolerant soybeans with the increasing recognition of controlling weeds early and extending that control to protect yield. Some growers have indicated they feel less pressure to go out with multiple in-crop applications because of the extended control of an earlier residual application,” she adds.

Boddy reminds growers that resistance management is an important factor for all growers to consider. “Using diversified modes of action in your pre-emergent application with the same high level of weed control as an in-crop herbicide is a very strong approach to delay the onset of resistance and control already resistant weeds.”

And Hayward notes the importance of diversity in a long-term herbicide plan. “Growers are recognizing the benefits of using the various tools in the toolbox for tank-mixing and multiple modes of action,” Hayward adds. “The Authority products are part of a handful of residual products that provide that diversity in an herbicide plan with different modes of action. They are also an important partner in eliminating early weed competition to start clean and stay clean during the critical weed-free period – a priority for soybean growers.”