The WEED-It system only sprays when a weed is detected. 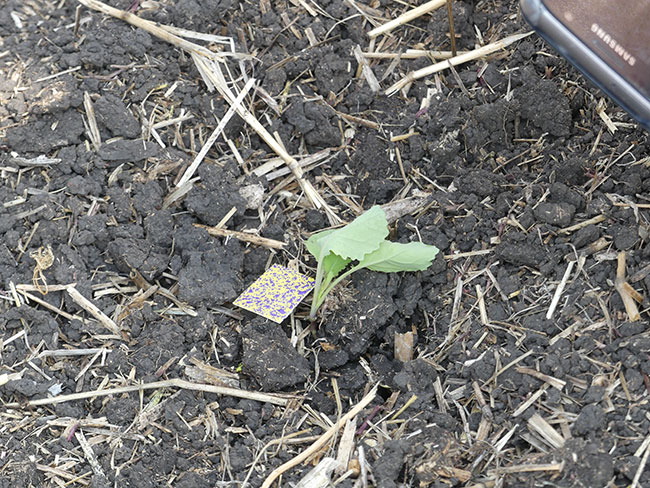 The Weed-it sprayer saves up to 75 per cent on herbicides by only spraying when a weed is detected. Photos by Bruce Barker.

The Weed-it sprayer has been around for a couple years in Canada with several sprayers now operating in Western Canada in 2019. The Weed-it sprayer uses a system of linked sensors that scan the surface of a field at a rate of 40,000 times per second. The sensors emit an infrared light that detects green plants. Five sets of nozzles cover a one-metre section of ground, and are activated when a weed is detected.

Weed-it can be fit onto most self-propelled and trailered boom sprayers. It was installed on de Coninck Smith’s John Deere R4045 sprayer with 120-foot boom and 1,200-gallon tank. It was used for the first time in 2018.

Travis Albrecht in Medicine Hat, Alta., has been doing the installations for Weed-it in Western Canada. He says those types of savings are typical on other farms as well. The cost for a 100-foot Weed-it system mounted on an existing boom is $185,000. In Alberta, rebates of about $40,000 may be available through participation in the Alberta Environmental Farm Plan.

Tom Wolf with Agrimetrix Research and Training in Saskatoon has looked at the Weed-it system and feels it is proving to work well in Western Canada. 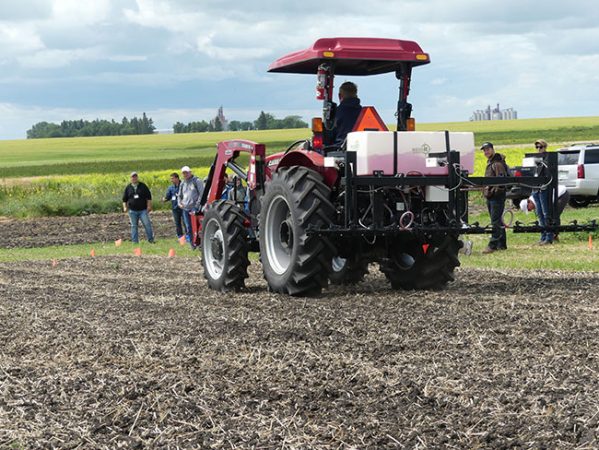 A Weed-it demonstration at the 2018 Saskatchewan Crop Diagnostic school.

“The way I talk about it is that it is a tool to facilitate better spraying practices,” he says. “A farmer can spray one-quarter of the herbicide to save on cost and reduce environmental impacts, and it provides the opportunity to use a more expensive herbicide or combination of herbicides to help delay herbicide resistance.”

One of the features on the Weed-it sprayer is the ability to use a bias spray in the background. This means that Weed-it is spraying continuously at a background rate of up to 50 per cent of full rate across the entire boom width. Currently, Weed-it detects thumbnail-sized weeds. A bias spray helps to ensure that weeds smaller than this are still sprayed, and because the weeds are so small, the reduced rate still provides a lethal dose. When a larger weed is detected under a nozzle, that nozzle applies the full rate on just that weed.

For de Coninck Smith, the bias spray is used in a couple of different scenarios, usually at a 20 per cent bias. Early in the spring, ahead of cereals and canola, he uses only the sensor technology for spraying. Ahead of lentil crops, he uses a bias spray to ensure all emerging weeds are controlled since lentils are not as competitive with weeds as cereals and canola. If fields have small, emerging wild oats, de Coninck Smith also uses a bias spray since the small vertical leaf makes the weed hard to detect. He also uses bias spray on chemfallow.

Post-harvest application is another area where de Coninck Smith says the Weed-it provides weed control benefits. He doesn’t use pre-harvest glyphosate, so uses post-harvest herbicide spray applications to control perennial and winter annual weeds. “We’re saving up to 90 per cent post-harvest. Just on Canada thistle it is unbelievable. On lots of fields, I wouldn’t do without it in the fall.”

Wolf says research on Weed-it needs to be conducted in a couple different areas. In 2018, flixweed went undetected in some cases, and canola stubble sometimes caused sensing problems. When to use the bias mode and whether that impacts the development of herbicide resistance with sub-lethal doses are also questions that need to be answered.

Albrecht says the sensors sometimes have a problem detecting weeds that are very pale green, and tansy mustard with its reddish-lime green colour sometimes goes undetected. The bias mode can help control these weeds if they are small enough.

The Weed-it system was developed in the Netherlands. Croplands Equipment is currently distributing the system in Canada.