It is well known that cover crops offer many potential benefits, including management of erosion, sequestering of soil nitrogen, improvement of soil and pest control. The importance of successful cover crops is well recognized by farmers, who have greatly increased cover crop acreage in parts of Canada and the United States over the last few years.

Among other studies, one research project during the fall of 2012 found that corn planted after cover crops had almost a 10 per cent increase in yield compared to side-by-side fields with no cover crops, and soybean yields were similarly improved by almost 12 per cent.

But to gain these benefits, the cover crop has to be successful. “One aspect that can significantly impact the establishment of cover crops that has received little attention is the effect of residual herbicides,” says Dr. Darren Robinson, a crop scientist at the Ridgetown campus of the University of Guelph. “Being able to improve our collective understanding of the effect of residual herbicides on the
establishment and growth of cover crops will be very useful to growers with best cropping practices, including cover crop selection.”

Some surprising results
Overall, the research team discovered that certain cover crop/herbicide combinations are not compatible. “In addition to improving our understanding of which cover crops can be successfully established after certain herbicides, we also learned that the reduction in cover crop growth translates to a reduction in their ability to perform certain intended functions,” Robinson notes. “For example, when buckwheat is grown after Pursuit, its ability to compete for light is significantly reduced, and since buckwheat is often used for weed suppression, this knowledge can be used to help select certain cover crops over others based on a grower’s herbicide applications.”

It was found that one year after application, both Broadstrike RC and Pursuit cause carryover injury, stand loss and biomass reduction to buckwheat and sorghum-sudangrass. “In addition, we found cover crop competitiveness was significantly decreased since both these cover crops are often used for weed suppression,” Robinson explains. “A recropping interval of 22 months is therefore recommended in this case.” It was also discovered that Pursuit negatively impacted soil aggregate stability in these cover crop treatments.

The establishment of spring wheat was unaffected by residues of Broadstrike RC, Pursuit, Integrity, Callisto+Primextra and Converge, applied 12 months prior to planting, so no recropping intervals are necessary. “Winter rye and annual ryegrass were injured, and their stand counts and nitrogen scavenging reduced, by Callisto+Primextra,” Robinson adds.

Soil water-holding capacity and nutrient uptake of non-leguminous species (such as annual ryegrass, wheat, oat, fall rye, sorghum-sudangrass, buckwheat, oilseed radish) were affected differently by residual herbicides applied the previous year. Specifically, Broadstrike RC, and Pursuit reduced ability of oilseed radish, fall oats, buckwheat and sorghum-sudangrass to improve soil water-holding capacity and scavenge nitrogen. Callisto Primextra reduced ability of annual ryegrass and buckwheat to do the same. Despite the visible injury that Integrity and Converge Flexx were noted to cause to annual ryegrass, the researchers found that it did not reduce the ability of this cover crop to improve soil water-holding capacity and scavenge nitrogen. Robinson says this is likely because the cover crop stand and root/shoot biomass were not negatively impacted by either herbicide treatment.

Crimson clover, red clover and sweet clover were not negatively affected by herbicide residues of Broadstrike RC, Integrity, Converge Flexx and Pursuit. As a result, their ability to improve soil water-holding capacity and organic matter were not affected by any herbicide residues. “This is important, as it shows the compatibility of the different clover species with many commonly-used corn and soybean herbicides,” Robinson says. “Callisto Primextra will carry over onto red clover and reduce its ability to improve soil water holding capacity and soil organic matter.”

Lastly, Broadstrike RC, Converge XT and Pursuit all reduced early season growth of hairy vetch, and though there was not a significant reduction in nitrogen production, there is some cause for concern with these herbicides and hairy vetch. “It’s not recommended that hairy vetch be planted where Broadstrike RC, Converge XT or Pursuit were applied earlier in that growing season, and that a recropping interval of 12 months be followed for this cover crop,” Robinson says.

From the economic perspective, Robinson notes that farmers pay up to $25 per acre for cover crop seed and an additional $15 per acre for establishment costs. He is confident in saying that depending on seeding rate and the costs of seed and planting, the knowledge gained through this project has the potential to save growers between $20 and $40 per acre through avoiding poor cover crop selection.
“Moving forward, the information we gleaned in this research should be expanded to include additional cover crop species and cover crop mixtures,” he says. “Another related area of research is to study whether different cover crop planting times influence the effect of herbicide residues on cover crop response.” 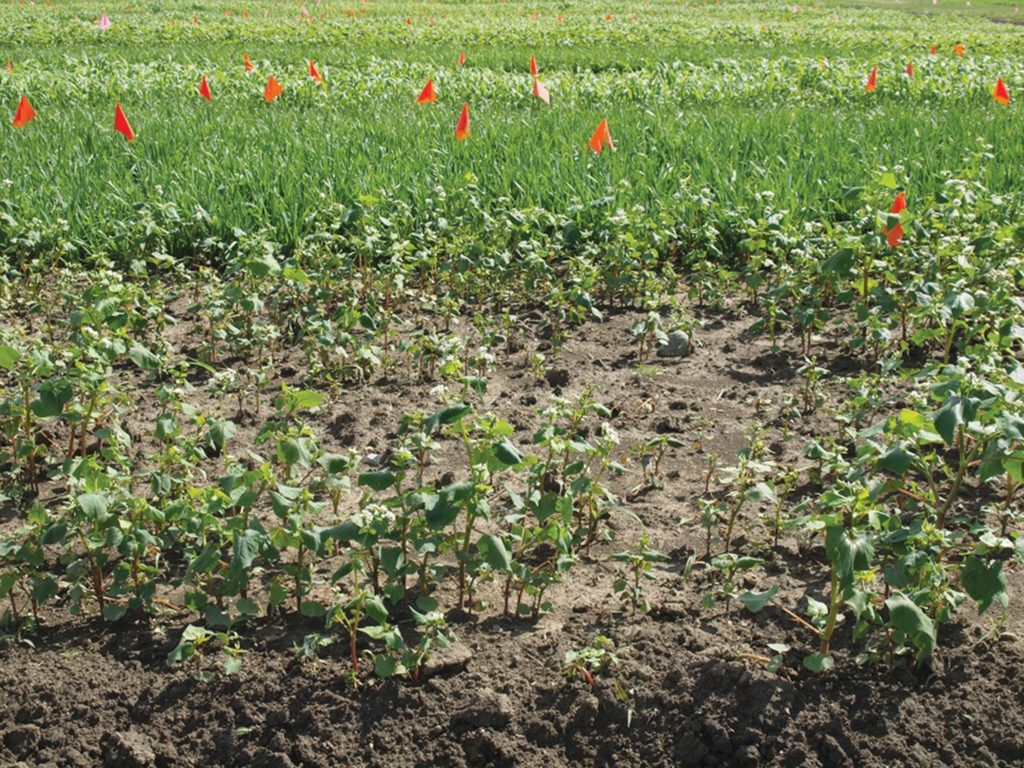 Dr. Darren Robinson and his colleagues studied the residue effect of Broadstrike RC It is well known that cover crops offer many potential benefits