If free nitrogen at 40 pounds per acre doesn’t interest you, maybe the other benefits will, says Manitoba’s advocate for alternative agriculture, Dr. Martin Entz.

Fifteen years ago, Entz says, he didn’t know that fall is a good time to grow plants – in some years. He didn’t know they added a lot of carbon to the soil in their organic matter. He didn’t know nearly as much about how to keep beneficial soil organisms alive.

The University of Manitoba research scientist, together with his technician, Keith Bamford, began doing cover-crop experiments in 1996. Since then, nearly every year they have seen benefits to spring-seeded crops after covering the field with some form of green cover crop that would never be harvested.

”You have to be opportunistic for cover crops,” he says in retrospect. “If you’re harvesting in the middle of September, that’s not a cover-crop year.

“If you’re harvesting wheat or barley on Aug. 20, and if you’ve got moisture in the field, you can make yourself 40 pounds of nitrogen if you put in a crop of 4010 forage peas or forage peas mixed with something like oats or tillage radish.”

As well, cover crops are well suited to fields that have excess water. On average, he says, a forage pea cover crop will consume one-and-a-half to two inches of soil moisture. It also will help the soil thaw and warm faster in early spring, thus improving the outlook for the crop that follows.

Decision time
July is decision time as to whether or not to get ready to plant a cover crop after harvest. That applies across the eastern Prairies and Parkland region. It can apply in the Brown soil zone, too, if weather enables early planting in spring and enough fresh rain in mid-summer to start a new crop when the old comes off.

“That’s a cover-crop year,” Entz says. “But if it’s been bone-dry, like this year was in southern Manitoba, that’s not a cover-crop year. The risk is high if there’s no water in the soil profile.”

Cover cropping is recognized as a best management practice. In Manitoba, and possibly in other western provinces, the Environmental Farm Plan program will pay farmers for the seed for cover crops, he says.

Still, there’s a judgment call to make if conditions look good for planting a cover crop. The cash invested in seed along with the time and field operation need to be balanced off.

In fact, says Entz, a thousand pounds of legume dry matter leaves 25 to 30 pounds of nitrogen for the following crop. Manitoba’s average late-season legume dry matter yield is a little more than that. He adds, “We have often grown much more – up to 4000 pounds per acre.”

Entz suggests growers start by assuming the legume will generate available nitrogen to offset 40 pounds per acre of commercial nitrogen. Balance that against the cover-crop investment, but remember the non-cash benefits.

For example, he suggests, mixtures can be very productive. After an early canola harvest take the drill out and put in some peas or oats.

“The canola will volunteer. That will put a lot of carbon in the soil. Peas will grow into November, and they will add a lot of nitrogen. We have peas at Carman that were seeded after the wheat harvest, and they’re close to two feet tall already,” he said in mid-November.

Other options
Various clovers, peas, lentils, hairy vetch and fababeans have been fall-seeded for the cover-crop research to add nitrogen for the next crop. Generally, the research team gets the crop started in August. They produce as much legume nitrogen as possible in the fall for the next non-legume crop, either cereal or oilseed.

If the next crop will be a legume, such as soybeans or dry beans, there are other options to cover the ground and justify the investment.

“We plant a cover crop, either a fall crop like fall rye or a spring crop like spring oats. We let the winter kill it, and seed the soybeans or the dry beans there the next year,” says Entz. “The general purpose is to provide cover on the land. With dry beans in Manitoba, we’re trying to reduce the water-logging threat for the following year.”

Weed suppression is a second benefit of a fall rye cover crop, due to its allopathic properties. One of Entz’s grad students discovered, in the past 15 years, that decomposing fall rye reduces the germination of small-seeded weeds like redroot pigweed and green foxtail.

Another PhD candidate, Harun Cicek, learned that spring-seeded red clover can work as a cover crop with winter wheat or fall rye. It also works with canola.

For winter wheat, it’s practical, but the results are hit-and-miss.

But, it also depends on the vigour or density of the wheat. The red clover understory can be smothered if the wheat crosses a threshold of about 60 bushels per acre in final yield.

For canola, especially Clearfield canola, the two can be seeded as one crop. When the canola is swathed, a large window opens for the red clover to start making nitrogen.

Carbon benefit
The value of organic matter to soils and crops has been known and appreciated since the 1930s, but the role of carbon has been less appreciated, says Entz.

When a cover crop dies, whether in winter or spring, it generates “green” manure for the crops to come. Captured, or sequestered, in that manure is an amount of carbon to eventually feed micro-organisms and become the building blocks of new crops.

“The second thing we’ve learned is that carbon in soil is important. It makes the soil function better, to be more productive. These late-season cover crops add a lot of carbon to the soil,” notes Entz.

Weed cover
A third lesson for the professor has been the discovery that, after the crop is off, a field needs living plants as well as dead straw cover.

According to Entz, that means that when the crop comes off, it serves your interest to have something growing in the field. It could be a cover crop, or just weeds. Volunteer canola won’t help. Canola is the one crop that does not host mycorrhizal fungi.

“Leading agronomists now advise, don’t be in a big hurry to kill some regrowth in your crop. To keep that fungus alive, it’s got to associate with living roots. If you’ve got a bunch of volunteers, leave them as long as you can. If you don’t have quackgrass or Canada thistle in there, there’s no reason to spray that thing out,” notes Entz.

He concludes, “Farmers in the wet fringes of the Prairies certainly should be aware of cover crops and be prepared to use them in the years that they make sense. In south-central Manitoba, they’re a natural fit.” 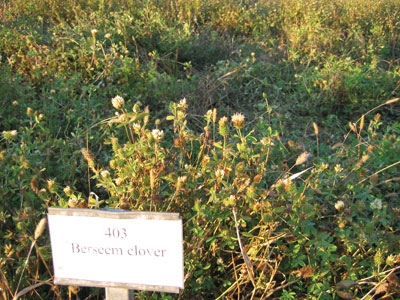 Cover crops such as berseem clover can fix nitrogen and use excess moisture in the fall. If free nitrogen at 40 pounds per acre doesn’t interest you