Foliar diseases in barley can be a challenge for growers; increasingly so as the trend to shorter rotations continues. Fungicides are just one of many disease-management tools. Protecting the upper leaves in the barley canopy are important for grain filling and yield, with flag leaf to head emergence in barley as the recommended fungicide application timing. 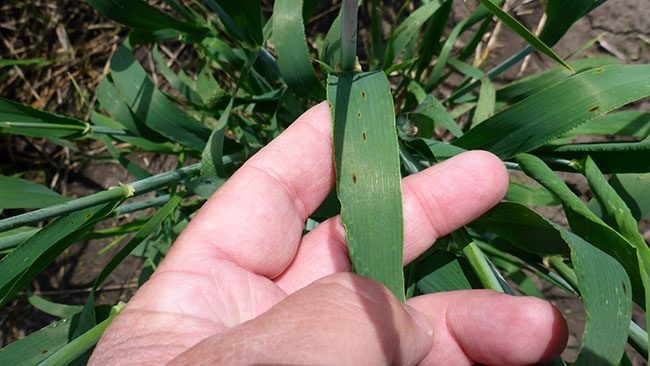 A typical example of spot form net blotch. Note that the bulk of the leaves are still green. Foliar diseases in barley can be a challenge for growers

However, there has been an increasing interest in tank-mixing fungicides with herbicides and applying the combination at an early crop growth stage. Recent research efforts have helped answer questions about this management strategy.

“We initiated a three-year project in 2010 to take a look at the impact of fungicide and herbicide timing on disease severity and barley productivity and quality,” explains Kelly Turkington, research scientist with Agriculture and Agri-Food Canada in Lacombe, Alta. “This project is part of a progression of research over the previous decade that has studied fungicide timing, comparing application at flag leaf emergence and earlier timings, and more recently head emergence. There was also an increasing interest in the impact of split fungicide applications, as well as tank-mixing fungicides with herbicides. In this study we wanted to find out more about the effect of early versus mid-season application of fungicides in relation to barley productivity and kernel quality. With research at Lacombe and elsewhere showing that early weed control can be an important strategy in terms of limiting early season weed interference, we also wanted to compare early and later herbicide application timing, as farmers may delay their herbicide applications to try to get better disease control when tank mixing with a fungicide.”

The project was conducted at six sites across Western Canada for three field seasons from 2010 to 2012, including Lacombe and Lethbridge, Alta., Scott, Melfort and Indian Head in Saskatchewan, and Brandon, Man. The barley variety AC Metcalfe, which is susceptible to scald and net-form net blotch and has intermediate resistance to spot-form net blotch, was used in the trials. Combinations of 10 different herbicide and fungicide treatments were compared at each location, including herbicide only at early and later stages and fungicide only treatments at half and full rates at early and later timings. Fungicide treatments (propiconazole) were applied to barley at the two- to three-leaf stage (herbicide and half-rate fungicide), five- to six-leaf stage (herbicide and half-rate fungicide), and/or the flag leaf stage (full or half-rate fungicide only). Leaf disease assessments were conducted at the early dough growth stage, and weed biomass, grain yield and quality were determined.

“The study showed that the biggest impact on foliar disease and barley yield and quality was a fungicide application at the flag leaf stage,” Turkington says. “Under conditions in Western Canada, our research shows that fungicides applied at a herbicide timing may not play much of a role in disease management and crop productivity. To manage the disease and maximize productivity, the fungicide application timing needs to target the upper leaves in the crop canopy. The yield results mirrored those findings, showing there was no real benefit to an early fungicide application; only when applications were made at the flag leaf emergence was there any significant increase in productivity. In addition, there was a significant reduction in yield when the herbicide was applied at the five- to six-leaf versus the two- to three-leaf stage. By delaying the tank-mix application to try and get more activity from the fungicide, growers are compromising herbicide efficacy and weed control.”

The results also showed no real benefits to split applications of fungicide at the time of herbicide application and at flag leaf emergence. Split applications did not improve disease management and crop productivity compared with a single full rate fungicide application at the flag leaf stage. The key to foliar disease management is applying the fungicide on the right target, which is protection of the upper canopy leaves, flag leaf tissue and head
tissue – the key plant parts that contribute to grain filling and yield. Although spraying early at the herbicide timing is done with the idea of protecting the healthy green leaf tissue, it will not kill the pathogen in well-established infections. Therefore, new upper leaves that emerge after that early application are unprotected and the pathogen will continue to infect new leaf tissues.

Another important factor at the early crop stage, Turkington adds, is proper identification of the leaf diseases in the field. “I’ve seen many times over the past 10 to 20 years in farmer fields and even research plots where early-season crop problems were attributed to leaf disease, but were actually due to other issues.” For example, in 2006 in Lacombe, colleagues were evaluating the impact of seeding rate, variety, nitrogen rate and other factors on barley, and were concerned they may have a potential early-season leaf disease problem that needed a fungicide spray. However, scouting confirmed the symptoms were not indicative of foliar diseases like net blotch or scald. It turns out that cool and dry spring conditions had resulted in poor nitrogen mineralization and a transient N deficiency that disappeared a couple of weeks later when temperatures warmed up and precipitation arrived. Other problems such as foliar fertilizer or herbicide injury to barley can produce similar symptoms to leaf disease. Thus, if a fungicide application is made based on the assumption symptoms are from a leaf disease, an individual would incorrectly assume that the fungicide worked when the conditions disappeared over the next couple of weeks.

A typical example of spot form net blotch. Note that the bulk of the leaves are still green.

“Although it may seem that a combined herbicide and fungicide application offers some piece of mind and reduces field operations, in our shorter growing season, growers looking at tweaking yields and controlling foliar diseases are best served by focusing on a fungicide application around flag leaf emergence or perhaps following head emergence if leaf disease development is delayed and/or Fusarium head blight is also a concern,” Turkington says. “This timing offers the best foliar leaf disease control for net blotch and scald and provides significant benefits to barley productivity and yield. The only caveat is stripe rust in cereals where, if symptoms are identified at an early stage and scattered across the field, then a fungicide application prior to flag leaf emergence is recommended. In addition, ongoing scouting is important, as a second fungicide application may be required for stripe rust management. From a herbicide perspective, an early herbicide-only application at the two- to three-leaf stage also significantly contributes to reduced weed interference and increased yield and productivity, as compared to delaying weed control to the five- to six-leaf stage.”

Looking to the future, Turkington is interested in some recent barley research he observed in Australia using seed treatments as an option for early to mid-season control of foliar leaf diseases. The particular seed treatment, based on new SDHI fungicides, is not available or registered for use on barley in Canada, but is showing good success in Australia. “We recently completed research with a triazole- and strobilurin-based seed treatment that is registered in Canada, and in some years and at some sites it did appear to have a potential benefit in terms of leaf disease management. Down the road, access to newer, more mobile seed treatments may help to limit early to mid-season leaf disease concerns, thus allowing farmers to focus an in-crop fungicide application when needed after head emergence for prolonged upper canopy leaf disease management and potential suppression of Fusarium head blight.

“The results of our study and other research confirms that fungicide application around the flag leaf to head emergence stage in barley, and other cereals like wheat, is the best leaf spot disease management strategy in Western Canada,” Turkington says. “Combining this upper canopy leaf protection using a fungicide, while targeting early-season weed removal using herbicides can help minimize the impact of leaf diseases and weeds and promote high and less-variable grain yields.”

Turkington says another important benefit of limiting disease control to one fungicide application in a season is the risk of the pathogen developing resistance reduces. “The more times a fungicide is used within and between seasons, the more selection pressure is put on the pathogen population to adapt to the fungicide, especially if the same fungicide group is being used. Unfortunately, we are beginning to see evidence of the potential for shifts in sensitivity based on recent research focused on the net blotch pathogen. Scouting fields at or just prior to flag leaf emergence can be used to assess disease risk and the need for a foliar fungicide application to target leaf diseases, whiles maximizing yield and productivity in barley and other cereals.”