Soybean mosaic virus is the most common soybean virus in Ontario. Outbreaks can cause serious economic loss, so researchers are tracking the occurrence of this virus and working toward soybean varieties with more durable resistance to the virus.

Back in 2003 when plant virologist Dr. Aiming Wang started with Agriculture and Agri-Food Canada (AAFC) in London, Ont., he happened to pass a soybean field. With 67 viruses known to attack soybeans worldwide, he stopped to look. He saw typical soybean mosaic virus symptoms, so he added soybean viruses to the list of plant viruses that he studies.

Wang and his research team regularly monitor for soybean viral diseases, checking soybean fields each year in mid-August. “Since 2006, we have collected more than 2,000 soybean leaf samples mostly from Ontario and a small portion from Quebec. We used ELISA, a classical diagnostic tool, and RT-PCR, a more sensitive tool, to identify the viruses. Among five major viruses, we identified four that are endemic in Ontario and Quebec,” says Wang.

“Soybean mosaic virus is the major one, followed by alfalfa mosaic virus, then bean pod mottle virus and tobacco ringspot virus. These four viruses are also major viral pathogens in other parts of the world, such as the United States, Brazil and Asian countries such as South Korea, Japan and China.”
Plant pathologist Albert Tenuta with the Ontario Ministry of Agriculture and Food and Ministry of Rural Affairs worked with Wang on some of this monitoring work. “Viral pathogens have been associated with soybean production for almost as long as soybeans have been grown in Ontario,” says Tenuta.
“There are many different viruses that can affect soybeans and all of them have unique characteristics and symptoms that help you distinguish between them. We have traditional viruses such as tobacco ringspot virus and soybean mosaic virus, and a new one called soybean vein necrosis virus that we’ve found in the past few years in Ontario and the United States northern soybean growing area.”
He notes, “For us, soybean mosaic virus is the most problematic of these viruses because of its impact on seed quality and yield.”

The symptoms of soybean mosaic virus infection vary depending on the soybean variety, virus strain, environmental conditions and plant age when infected.

A key symptom is a brown or black discoloration of the seed coats, which reduces quality and marketability for food-grade soybeans that require blemish-free seed coats. Infected plants also produce fewer and smaller seeds so yields are lower. Other symptoms may include wrinkled, rough and/or mottled leaves, flower deformation, fewer pods and stunted plants.

At least 30 per cent of the seeds produced by an infected plant may carry the virus. Infected seeds are the main source of inoculum. The virus is transmitted from plant to plant mainly by aphids. The risk of yield loss and reduced seed quality increases if the plant is infected by other soybean viruses at the same time.

Viral strains and cultivar resistance
Wang is conducting research to learn more about soybean mosaic virus strains to help soybean breeders develop resistant cultivars. “Over the past several years, we collected more than 100 isolates of soybean mosaic virus from Ontario and a small portion from Quebec, and we sequenced their genomes. We found that all the soybean mosaic viruses belong to a group called G2,” he says.

In North America, soybean mosaic virus isolates are classified into seven strains, G1 to G7, depending on how they affect a standardized set of susceptible and resistant soybean cultivars. Wang notes, “G2 is a major group in the United States and some variants of this group are also found in Asian countries.”
In soybean breeding programs around the world, three resistance genes – called Rsv1, Rsv3 and Rsv4 – are used to create soybean mosaic virus-resistant cultivars. G2 strains of the virus are able overcome the resistance conferred by Rsv3.

To better understand their Rsv4-resistance-breaking isolates, the researchers compared them to closely related isolates that couldn’t overcome Rsv4 and to another Rsv4-resistance-breaking isolate. “After extensive molecular studies, we found that only one nucleotide changed in these particular isolates. That single change confers the ability to overcome the resistance gene,” explains Wang.

Nucleotides are the building blocks of DNA and RNA. With only a single nucleotide change needed in the virus’ genome, it’s pretty easy for the virus to evolve to overcome this resistance gene.

Wang says, “Based on our data, we determined that the resistance genes are very fragile, and the resistance could easily be broken down by soybean mosaic virus isolates.” As a result, he suggested to AAFC soybean breeders Dr. Vaino Poysa (now retired) and Dr. Kangfu Yu that all three resistance genes should be pyramided into soybean germplasm to develop Canadian cultivars with more durable resistance to the virus.

Wang and his research team have confirmed that none of their isolates are able to infect lines that carry all three of the resistance genes.

In addition, the researchers tested 52 cultivars and accession lines from Ontario and Iowa for resistance to the virus. Eight showed good resistance, including two Canadian cultivars: AC X790P and AC Vin-Pro. Both cultivars carried Rsv1 and were developed by Poysa and his AAFC colleague Dr. Richard Buzzell (these two varieties are no longer commercially available).

Wang and his team have also looked for additional resistance genes beyond the three known ones. They screened 60 soybean cultivars and accession lines from Canada, the United States and China, but they failed to find any new resistance genes.

So Wang is working on a different way to generate resistant germplasm for breeding programs. He’s using emerging technology that involves mutating certain factors in the host plant that the virus requires for infection.

“All viruses have small genomes. That means they have very limited ability to code for proteins. So they cannot replicate themselves,” he explains. “[Soybean viruses] need soybean proteins to help them. So if we can mutate one of these soybean genes, then a susceptible soybean cultivar could become resistant.”

Along with Poysa, Yu and Tenuta, Wang has also been collaborating on this soybean mosaic virus research with Dr. Istvan Rajcan and Dr. Hugh Earl at the University of Guelph in Ontario, and with Dr. Martina Stromvik at McGill University in Quebec. Wang also appreciates the co-operation of the many soybean growers who have allowed the researchers to take samples in their fields. Grain Farmers of Ontario and AAFC are funding this research.

Outlook and control
“Our monitoring program shows the levels of the soybean viruses have been pretty stable in the past few years. That means our growers have done an excellent job to manage this issue,” says Wang.
However, continuing soybean virus research remains important. He explains, “Soybean mosaic virus and other viral pathogens can cause significant losses for soybean growers. By monitoring these viral pathogens we can watch to see if there’s a potential for one of them or several of them to outbreak in Ontario. Then we can recommend measures to control the viruses and to alleviate the economic loss.”
He adds, “Also, as global warming continues, viral pathogens are expected to cause more problems for farmers. Transmission of plant viruses is usually by means of insects, and with warmer temperatures, we will have more problems with insects. Aphids can transmit soybean mosaic virus. So we need to work to improve our soybean cultivars for stronger, more durable resistance to viral pathogens.”
Although Yu is currently working with the three resistance genes in his breeding program, none of the soybean varieties currently available in Ontario are known to have resistance to soybean mosaic virus.
Tenuta recommends using disease-free seed to help prevent soybean mosaic virus. He notes, “Once soybean mosaic virus symptoms are found in a crop, there are no fungicides or other chemicals that can reduce it.”

A recent study in Iowa and Wisconsin found that foliar insecticide application to control aphids was not effective in reducing disease caused by soybean mosaic virus.

According to Tenuta, economic loss from soybean mosaic virus in Ontario isn’t as high as losses from disease issues like soybean cyst nematode, seedling blights and root rots, and sudden death syndrome. “However, viruses are one of those disease factors that growers should always be watching for,” he says.

“It’s important to be able to distinguish viruses from other common problems that could give virus-like symptoms on a soybean plant. This year we’ve seen all kinds of odd and unusual leaf symptoms. Some are biotic – caused by living organisms

including pathogens – and others are abiotic – caused by things like environmental conditions or herbicide injury.”

He recommends, “If you think you’ve got soybean mosaic virus or another virus, particularly if you have identity-preserved soybeans where seed quality is more important than it is in oil or crush beans, then send a sample to the diagnostic lab to test for viruses.” 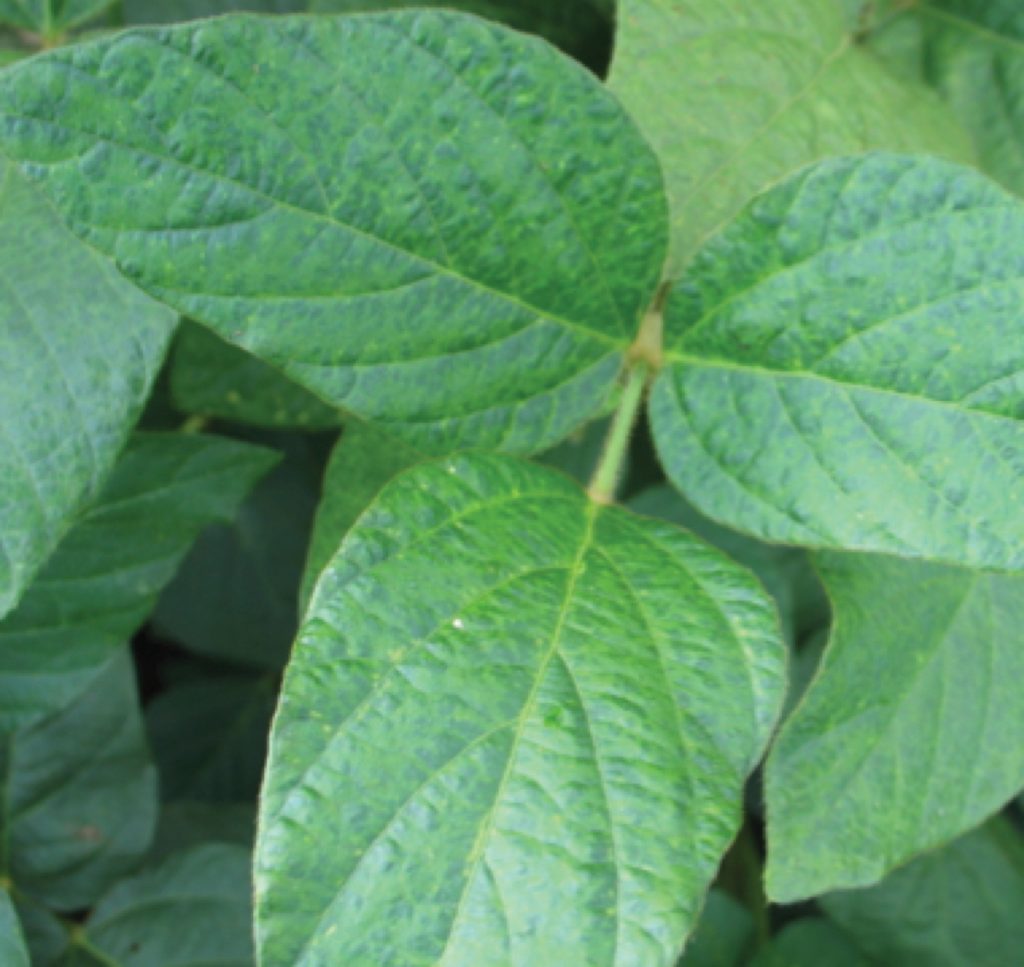